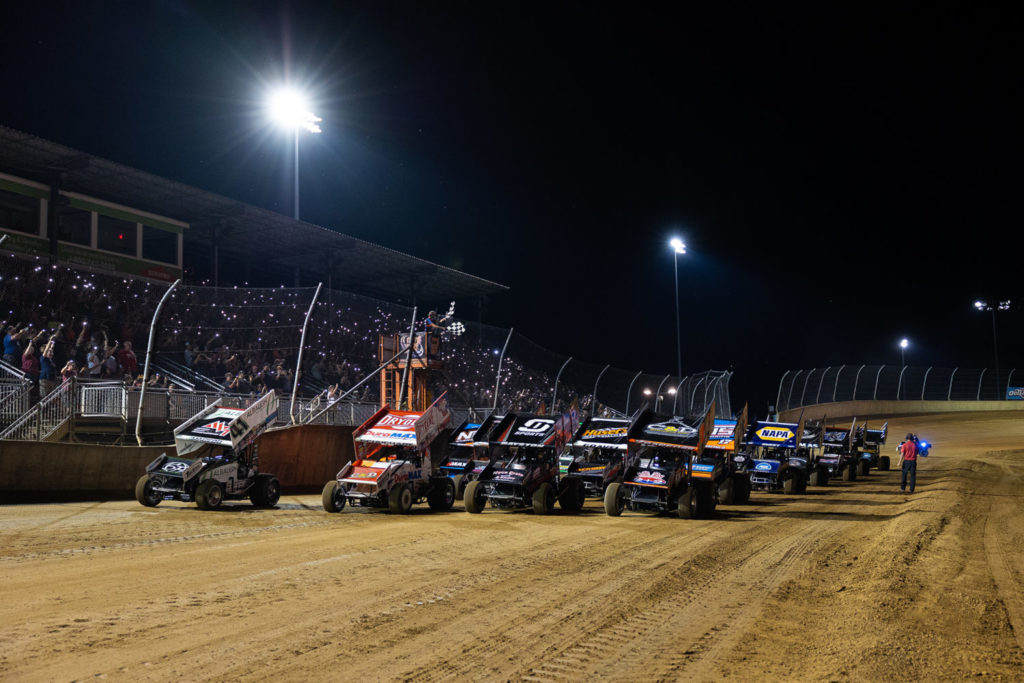 World of Outlaws Head to Wisconsin for Potential $30,000 Weekend

A weekend in the great state of Wisconsin awaits the World of Outlaws NOS Energy Drink Sprint Car Series.

The Greatest Show on Dirt will spend an extra day battling for extra money at Beaver Dam Raceway this Friday & Saturday as the 12th annual Jim “JB” Boyd Memorial expands to include a $20,000-to-win finale for competitors. The series will reach 30 all-time appearances at the Beaver Dam, WI 1/3-mile by the end of the weekend.

After an exciting weekend in Knoxville, Iowa, Brad Sweet continues to lead the championships standings over David Gravel, Carson Macedo, Sheldon Haudenschild, Logan Schuchart, Donny Schatz, Spencer Bayston, James McFadden, Jacob Allen, and Brock Zearfoss as the Series prepares for the upcoming “Month of Money” and the remaining 50 races on the calendar.

THE BIG BADGER: When it comes to Beaver Dam, and Wisconsin in general, nobody sticks out quite as much as Brad Sweet does. The Grass Valley, CA native has won in The Badger State more than anywhere else, scoring 11 of his 75 career World of Outlaws wins in the state, only six less than Steve Kinser’s all-time mark of 17 Wisconsin wins. The three-time and defending Series champion enters this weekend with a +62 point lead as he chases a fourth consecutive title this season.

Through 28 appearances at Beaver Dam, The Big Cat is tied with Daryn Pittman atop the list with four victories in his short tenure at the track. He’s contested 10 of those 28 races and impressively enough, has a top-five result in all eight of the races he finished. It’s a crucial weekend for the Kasey Kahne Racing, NAPA Auto Parts #49 team, who although continues to expand the championship advantage, remains only a one-time winner in 2022 with a Vado (NM) victory to show in March.

UPPIN’ THE ANTE: This weekend’s 12th annual Jim “JB” Boyd Memorial will line someone’s pocket with a little extra dough as the event expands on the calendar and atop the purse. Traditionally, a one-day event since established in 2010, the annual running is growing in 2022 with an added day making it a doubleheader and an added dose of money making Saturday’s finale now $20,000-to-win.

Thus far this season, the World of Outlaws have conducted five events offering more than the standard $10,000-to-win structure. Ironically enough, all five of those races have been won by a team from the state of Pennsylvania. Brent Marks has won two of those (Texas Outlaw Nationals / Morgan Cup) in the Murray-Marks #19, while Shark Racing’s Logan Schuchart (Bristol Bash) & Jacob Allen (Jason Johnson Classic), along with Spencer Bayston (Bristol Bash) in the CJB Motorsports #5 have each topped one.

PROVEN WINNERS: Behind Sweet, there’s a loaded line of contenders ready to pounce and earn their next victory at Beaver Dam. The quartet of Sheldon Haudenschild, Donny Schatz, Carson Macedo & Kraig Kinser have all won before at the Wisconsin oval, and look to stop the Kasey Kahne Racing #49 to get another this weekend.

Sheldon Haudenschild enters as the defending winner of the Jim “JB” Boyd Memorial, passing Giovanni Scelzi at halfway of last year’s 40-lapper to score his first-career Beaver Dam triumph. The Wooster, OH native will be going for a Series-best sixth World of Outlaws win in 2022 this weekend aboard the Stenhouse Jr. / Marshall Racing, NOS Energy Drink #17.

Donny Schatz is the most experienced full-time Outlaw at Beaver Dam, contesting 28 of the 29 shows in Series history. The 10-time Series champion scored wins in 2002 and 2015 at the track and goes for his second win of the season this weekend in the Tony Stewart/Curb-Agajanian Racing, Ford Performance, Advance Auto Parts #15.

Carson Macedo has yet to win a World of Outlaws race at Beaver Dam, but has won with IRA at the track in late 2017 aboard Joe Gaerte’s #3G. The Jason Johnson Racing pilot finished fifth at the track last year and like Haudenschild, eyes his sixth win of the season in the Albaugh #41 this weekend.

Kraig Kinser was a Beaver Dam victor a decade ago, topping the third edition of the Jim “JB” Boyd Memorial in 2012. It’s been a tough, but consistent road for the Bloomington, IN native in recent years with results of 12th, 12th, 13th, 12th, 11th, 12th, 12th. He’ll be looking to break that top-10 barrier for the third time this season as the Outlaws get back to Beaver Dam this weekend.

ON THE CUSP: Another group of seven full-time World of Outlaws NOS Energy Drink Sprint Car stars have enjoyed their own taste of success at Beaver Dam in the past, and look for their biggest breakthrough yet with two nights available this weekend.

David Gravel owns nine top-10 finishes in 11 starts at the track with a career-best of third on three occasions, including last year’s visit aboard the Big Game Motorsports #2.

Logan Schuchart has experienced a rollercoaster ride of results at Beaver Dam with numbers trending down, then up, then down, and ultimately peaking with a third-place finish in 2020 aboard the DuraMAX Oil, Drydene Performance Products #1S.

Jacob Allen, Schuchart’s Shark Racing teammate, owns a career-best of fourth at the facility as he returns hoping to capture another boosted payout for his third win in 2022.

Kasey Kahne says Beaver Dam is one of his favorite tracks in the country and has the numbers to back up his liking with a career-best of fifth with IRA in 2009 and an Outlaws best of ninth in 2020.

James McFadden has run sixth at Beaver Dam in the J&M #55 and KKR #9, now he looks to better that aboard the Roth #83 as he continues to chase his first win of the season.

Brock Zearfoss made his Beaver Dam debut last year and quickly found speed with a tenth-place finish in the Moose’s LZ Bar & Grill #3.

Bill Rose finished as high as second with IRA at Beaver Dam in 2014 and owns an Outlaws best of 11th at the track.

DUELIN’ IN DAIRYLAND: Beaver Dam’s doubleheader marks the first of five races in Wisconsin for the World of Outlaws NOS Energy Drink Sprint Car Series, and all of them come within the next month. The Badger State faithful can find further action with The Greatest Show on Dirt in a few weeks with stops at New Richmond’s Cedar Lake Speedway on July 1-2 and Wilmot Raceway on July 9.

BEAVER DAM DEBUT: The three youngest faces on the World of Outlaws NOS Energy Drink Sprint Car Series tour will all be making their first appearance at Wisconsin’s Beaver Dam Raceway this weekend.

Noah Gass of Mounds, OK has continued to grow leaps and bounds during his inaugural season with the World of Outlaws, proven by his first-career top-10 finish at River Cities (ND) to start the month of June. The 18-year-old rookie has yet to encounter Beaver Dam in his short time but is a two-time IRA winner in the state of Wisconsin with a pair of Plymouth Dirt Track triumphs coming last summer.

Robbie Price of Cobble Hill, BC is growing more and more accustomed to the Jason Sides #7S as he prepares for the final 50 races of the World of Outlaws season. The 24-year-old Canadian qualified for two Features at Atomic (16th) and Knoxville (19th) last weekend with his sights set on a third and fourth as the Series ventures to Beaver Dam this weekend.

THE BIG WHEEL: A native of Sheboygan, WI, Scotty Thiel is always one of the stout locals that rise to the challenge when the World of Outlaws NOS Energy Drink Sprint Cars enter his home state. The 30-year-old has earned four of his 22 career IRA (Interstate Racing Association) wins at Beaver Dam and owns 10 IRA podiums at the track to go along with topping this year’s season debut.

When it comes to the World of Outlaws, “The Big Wheel” has made 33 Feature starts with a career-best of eighth-place coming last year at Wisconsin’s Wilmot Raceway. He’s made six DIRTVision Fast Pass Dash appearances throughout his career and looks for a seventh and potentially eighth this weekend in pursuit of bettering his Beaver Dam best of 14th with The Greatest Show on Dirt.

REPPIN’ THE IRA: Along with Thiel, a handful of other Interstate Racing Association regulars are expected to make their season debut with the World of Outlaws in Wisconsin this weekend.

Jake Blackhurst of Hanna City, IL is an 11-time IRA winner and an 11-time Feature starter with the World of Outlaws. He’s already won with IRA once this year (Francis Creek, WI) and currently sits third in the standings. Blackhurst won at Beaver Dam in the fall of 2020 and chases his first-career top-10 with the Series this weekend.

Danny Schlafer of Gibson, WI has yet to taste IRA victory lane but has been rather consistent in 2022 with four top-five finishes placing him fourth in the current points. He enjoyed a breakout a moment earlier this year with a stellar second-place effort against the All Star Circuit of Champions at Plymouth (WI). Schlafer will be aiming for a second-career start with the World of Outlaws with his first coming last year at Wilmot.

Scott Neitzel from down the road in Beaver Dam, WI will be representing his hometown with a 22nd career World of Outlaws start on the line. The 25-time IRA winner owns victories at the track as far back as 1995 and scored his only Outlaws top-10 at Beaver Dam back in 2003 with an eighth-place finish.