WHAT TO WATCH FOR: 34, Wilmot Await the World of Outlaws Sprint Cars 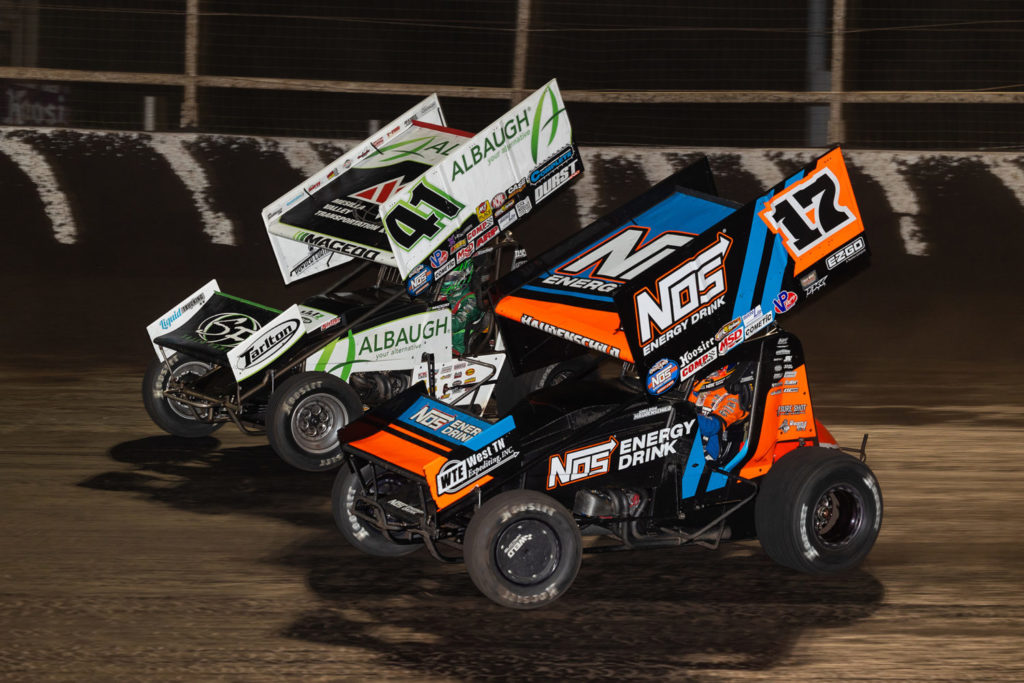 The Greatest Show on Dirt Prepares for "The Month of Money"

The busiest month of the season rumbles on this weekend as the World of Outlaws NOS Energy Drink Sprint Car Series visits 34 Raceway in West Burlington, IA on Friday and Wilmot Raceway in Wilmot, WI on Saturday.

It’s the final tune-up for teams and drivers before the fabled “Month of Money” begins next week in Ohio with the Brad Doty Classic at Attica Raceway Park on Tuesday leading into the Historical Big One and Kings Royal at Eldora Speedway from Wednesday-Saturday.

Brad Sweet continues to firmly grasp control of the championship while his closest contenders including Sheldon Haudenschild, Carson Macedo, David Gravel, and Logan Schuchart jockey for position behind him. Those five, plus the likes of Donny Schatz, Spencer Bayston, James McFadden, Jacob Allen, Brock Zearfoss, Kraig Kinser, and Kasey Kahne, all enter with chances at victory this weekend.

MILESTONES AHEAD: Amid his 26th full-time season of racing with the World of Outlaws NOS Energy Drink Sprint Cars, Donny Schatz is on the verge of three major milestones with the Series. If all goes planned…

He’ll start his 2,000th career Feature on Wednesday, July 20 at Port Royal (PA) Speedway. The 10-time Series champion currently sits at 1,992 starts and will join Steve Kinser and Sammy Swindell as the only three drivers to join the 2K club.

He could reach his 1,000th top-five finish by next Thursday, July 14 at Eldora (OH) Speedway. Again, the Fargo, ND native would put himself in a club with only Kinser and Swindell by achieving the feat.

He also has a chance to hit 500 Heat wins this Saturday, July 9 at Wilmot (WI) Raceway. Over the time span since he joined full-time in 1997, Schatz has almost 200 more Heat wins than his next closest competitor, Joey Saldana (302).

RETURN TO FORM: After struggling through the past two weeks as the points lead dwindled with zero top-five finishes in six starts, Brad Sweet and Kasey Kahne Racing returned to form last weekend at arguably The Big Cat’s best track – Cedar Lake Speedway. The Grass Valley, CA native was a winning contender both nights in New Richmond, WI, ending up second on Friday and third on Saturday following a pair of bids for the race lead that fell short.

His points advantage soared from +12 over Carson Macedo to +38 over Sheldon Haudenschild as he continues pursuit of a fourth consecutive championship this season. The NAPA Auto Parts #49 hopes to build that gap this weekend at 34 and Wilmot, where Sweet will enter as the defending winner at both tracks and looking to end a 23-race drought from Victory Lane.

BATTLING ADVERSITY: While Sweet enjoyed a peaceful podium performance last weekend, his championship counterparts had a much more trying outing at Cedar Lake. All four of the other top-five teams in the standings suffered some sort of mishap, resulting in either a DNF or work area trip, which only allowed the #49 to pad the points.

Carson Macedo entered the weekend second in points, but slipped from the lead to finish fifth on Friday, and then went for a big flip down the backstretch on Saturday which ended his night with a cracked frame.

Sheldon Haudenschild was stellar on Friday with a seventh-to-third effort, but his ninth-place effort on Saturday was limited due to a work area trip for a flat right rear tire on Lap 31 of 35.

David Gravel went backwards from eighth-to-ninth on Friday, and rallied for a big result on Saturday after dropping from third-to-16th thanks to a flat right rear tire on Lap 19. He quickly rebounded and drove from 16th-to-sixth in six laps and ended his night with a last-lap pass for second-place on Sweet.

Like Gravel, Logan Schuchart fell behind from fourth-to-10th on Friday and had to take the #1S to the work area while running fourth in Saturday’s finale. He went tailback and followed Gravel through the field to finish fourth in the 35-lap Feature.

LOCAL LEGENDS: Each venue on the docket this weekend has seen a fair share of local stars loading up and taking it to The Greatest Show on Dirt. Among the most notables performances of drivers expected to be racing are Josh Schneiderman and Scotty Thiel.

Schneiderman, who lives within walking distance to 34 Raceway in West Burlington, IA, enjoyed one of the finest debuts in World of Outlaws history in 2008. The driver of the #49J finished third behind Tony Bruce Jr. and Steve Kinser to become one of only 286 drivers to record a podium finish against the Series. He’ll try to replicate that performance this Friday night on home turf.

Thiel, who hails under two hours away from Wilmot in Sheboygan, WI, previously earned his World of Outlaws career-best at the track last year with an eighth-place performance. That mark was broken last week when the #73 pilot pulled off a sixth-place run at Cedar Lake, giving him momentum to aim for his first-career top-five with the Series this week.

WILMOT WARRIOR: When it comes to Wisconsin’s Wilmot Raceway, David Gravel holds the keys to the kingdom. Before last year – a daunting night which saw the #2 flip twice – he had yet to finish outside the top-five in six starts at the 1/3-mile oval. In fact, the Watertown, CT native held a whopping 1.6 average finish with four victories to his credit.

Gravel has won at Wilmot in the Roth Motorsports #83, CJB Motorsports #5, and Jason Johnson Racing #41, and now looks to add the Big Game Motorsports #2 to that list. The 30-year-old star will be extra hungry to snap a 23-race winless streak, his longest drought in more than three years.

FEEL-GOOD WINNERS: Entering as the most recent winners in World of Outlaws competition this weekend is two of the most likable stars on tour. Jacob Allen of Hanover, PA recorded his third win of the season last Friday at Cedar Lake, extending his remarkable 2022 campaign aboard the Shark Racing, Pells Tire Service #1A. Amazingly enough, only Sheldon Haudenschild (8) and Carson Macedo (6) have won more races than Allen this year.

After Allen, Brock Zearfoss of Jonestown, PA finally enjoyed his long-awaited moment in the spotlight on Saturday. He drove by champion Brad Sweet and off into the sunset at Cedar Lake, scoring his first World of Outlaws win since 2017 and his first as a full-time driver with the Series.

PARITY AT THE FRONT: The World of Outlaws have enjoyed a phenomenal stretch recently with six different winners highlighted by a trio of different leaders in those six consecutive races. Dial up DIRTVision this weekend to see if the impressive streak of outstanding racing at the front can continue.