WHAT TO WATCH FOR: Three Races in Five Nights for Traveling Outlaws 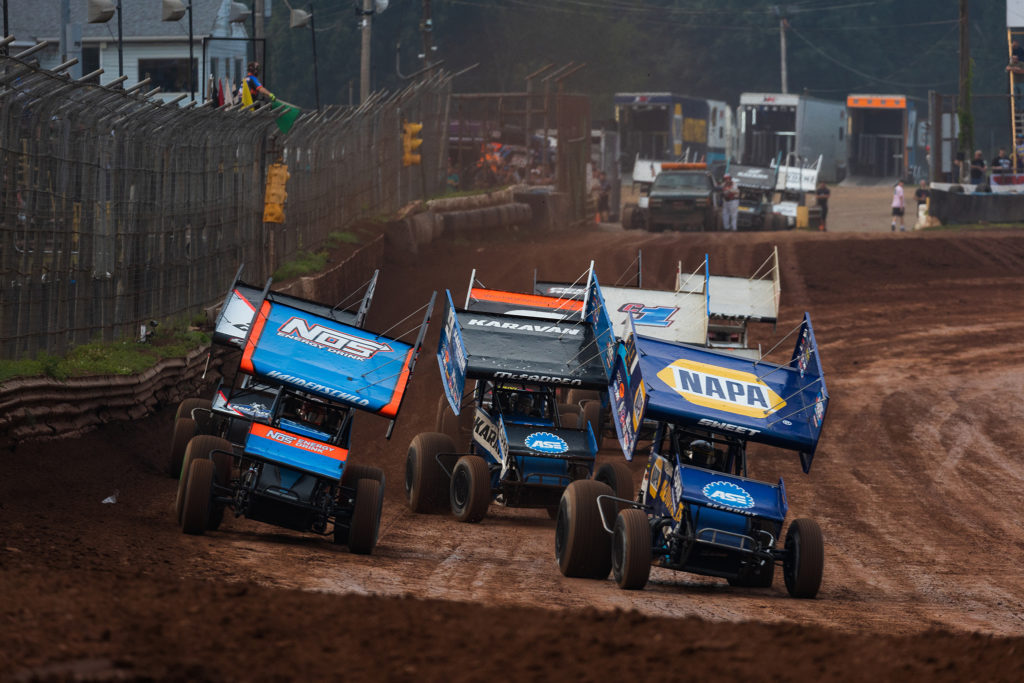 The Greatest Show on Dirt Races on Wednesday, Friday & Sunday

A busy stretch of three races over the next five nights awaits the World of Outlaws NOS Energy Drink Sprint Car Series.

It all starts tonight as The Greatest Show on Dirt returns to River Cities Speedway for the third time this season, hoping to complete its first event at the Grand Forks, ND bullring. David Gravel was QuickTime at the track in June, but North Dakota native Donny Schatz is certainly the favorite to defend his home turf again.

A seven-hour drive to Greenwood, NE awaits on Thursday, then the FVP Platinum Battery Showdown goes off on Friday night at I-80 Speedway. Championship leader Brad Sweet enters as the most recent winner at the 4/10-mile oval and looks to extend his point lead in pursuit of his third-straight World of Outlaws title.

Another 550-mile drive on Saturday to Rapid City, SD will lead the Outlaws into a Sunday showdown at Black Hills Speedway. Carson Macedo, who is third in points and in need of a fresh start, will enter as the defending winner aboard his Jason Johnson Racing #41.

By the end of the weekend when the Outlaws head west for a three-week swing in Washington and California, only 19 races will remain in the championship chase.

DAKOTA DOMINANCE: No driver on the World of Outlaws tour takes defending their home turf to the next level as much as Donny Schatz. Last weekend, the Fargo, ND native won just a few minutes away from his house at Red River Valley Speedway. It was his 23rd win in his home state and the 301st of his iconic career, a win that was almost even sweeter than his milestone 300th.

Tonight, Schatz gets one more race at arguably his best track on tour, River Cities Speedway in Grand Forks, ND. Previously known as “The Minot Missile,” Schatz has contested all 26 World of Outlaws Features at the bullring with monumental success. He’s won 12 of those races (46% winning percentage) and returns as the favorite tonight to make it 13 wins. With the Ford Performance Engine hitting on all cylinders, the Tony Stewart/Curb-Agajanian Racing #15 will be a threat everywhere we go over the next two months.

CHIPPING AWAY: All that remains in 2021 is 22 races for the World of Outlaws NOS Energy Drink Sprint Car Series, and the championship battle is far from over. Sure, Brad Sweet has held a tight grasp on the top spot since March, but David Gravel and his Big Game Motorsports #2 team are kicking it into high gear as they cut the deficit down to -120 after winning on Sunday night.

What’s on the line? Simply put, history, glory, prestige, and money. The things every Outlaw desires.

For Sweet and the Kasey Kahne Racing, NAPA Auto Parts #49, they’re chasing a third-consecutive title, something that only legends Steve Kinser and Donny Schatz have accomplished. For Gravel, he’s trying to climb the mountaintop for the first time in his career, which would make him the 11th driver in history to become an Outlaw champion.

From now until the conclusion of the World Finals, 75 days is all that remains in the season. Another weekend in the Dakotas, a three-week trip to the west coast, a return out east, a southeastern double, and the season finale, along with other challenges stand in the way.

TIME TO SHINE: A pair of full-time World of Outlaws drivers recorded season-best efforts on Sunday night at Huset’s Speedway.

Wayne Johnson of Oklahoma City, OK won his Team Drydene Heat Race and won the DIRTVision Fast Pass Dash to earn his first pole position in more than seven years. He led 13 of the first 14 Feature laps before falling to finish seventh, his best run of 2021 aboard the Two-C Racing entry. The seventh-place finish is Wayne’s 19th top-10 of his Outlaw career and his best result since June of 2013 at Kokomo. It’s the second time in the last month that the 50-year-old Johnson has stole headlines with his performance.

Along with the #2C, the #1A also opened eyes on Sunday night. Hanover, PA’s Jacob Allen charged forward to put his Shark Racing, Drydene Performance Products #1S on the podium for the first time this season. His third-place finish the 12th podium finish of his career and gives him more momentum heading into a weekend where we visit Black Hills and I-80, two places that Allen has led laps at and nearly won before.

SETTLING IN: Assigned to the Roth Motorsports, Beef Packers #83 for the remainder of the 2021 season, Kasey Kahne has taken little time settling into his new ride. After a top-10 performance at the Knoxville Nationals, the former NASCAR Cup Series star rattled off another QuickTime and New Track Record at Red River Valley. They’ve had immense qualifying speed, but struggles with Heat Race starts forced Kahne to miss both Dashes last weekend.

He’ll have three more opportunities this week to finetune the new combination before the Enumclaw, WA native returns to his home state for four straight nights on September 3-6.

RESET BUTTON: The case could be made that Huset’s Speedway is Carson Macedo’s kryptonite. The Lemoore, CA native debuted at the Brandon, SD last September and ran second in his first appearance, although it was a race haunted by tire trouble. In four starts since then, three of them coming this year, Macedo has yet to finish better than 14th at the 1/3-mile oval. He was leading on Sunday night when a lap traffic incident stripped him of a potential eighth win of the year.

An 18th-place effort officially ended Macedo’s streak of 20 consecutive top-10 finishes and sent him falling to third in the championship at -162 behind Sweet. With three races over the next five nights, Macedo and the Jason Johnson Racing #41 will look to hit the reset button and start fresh with a new streak as we hit the homestretch of the 2021 season.

THIRD TIME’S THE CHARM: Mother Nature has done her best to deter the World of Outlaws Sprint Cars away from Grand Forks this year. She sent a massive downpour of rain following Slick Woody’s Qualifying in June and offered severe thunderstorms last Friday night. However, Wednesday’s forecast looks great, albeit chilly, as the Outlaws prepare to visit the always-thrilling bullring for the 27th time in Series history.

ALL CHARGED UP: Friday’s FVP Platinum Battery Showdown puts Greenwood, NE’s I-80 Speedway in the spotlight. It marks the 33rd Series event at the 4/10-mile, but only the fifth race within the last decade. Championship leader Brad Sweet enters as the most recent winner at the track, overtaking Jacob Allen last August and surviving a green-white-checkered finish to beat Carson Macedo and Logan Schuchart.

HEADING WEST: On Sunday, a visit to Black Hills Speedway in Rapid City, SD will officially mark the journey west. A three-week swing with four straight nights through Washington and four more nights in California will bring The Greatest Show on Dirt back to the West Coast for the first time since the fall of 2019, prior to the COVID-19 pandemic.

Around the Turn: Following this weekend, the World of Outlaws NOS Energy Drink Sprint Car Series takes The Greatest Show on Dirt to the west coast for a three-week swing. It all starts with four straight nights in Washington highlighted by the Sage Fruit Skagit Nationals (Sept. 3-5) and a Monday night stop at Grays Harbor Raceway (Sept. 6).