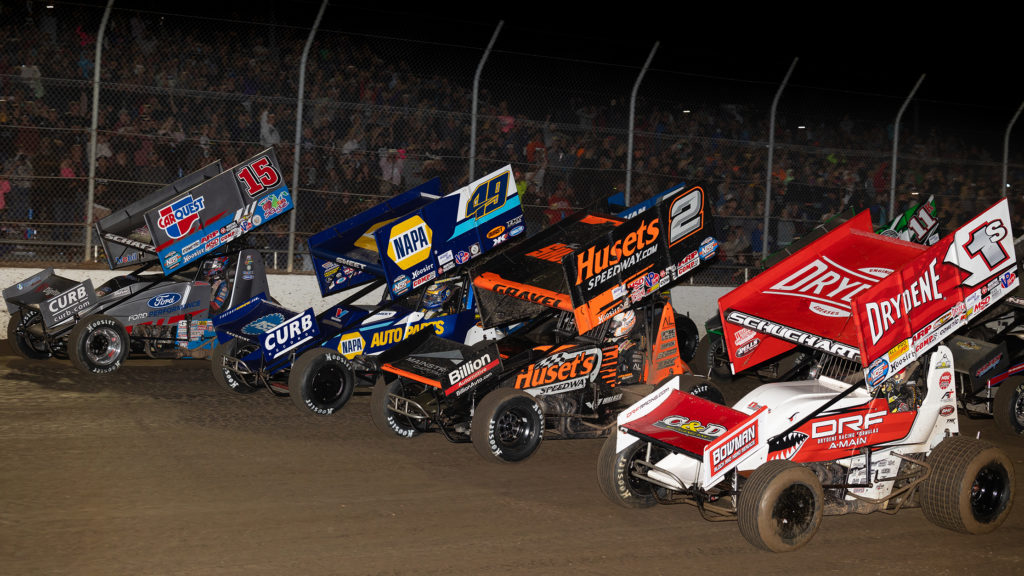 For the first time since January, the tenacious travelers of the World of Outlaws NOS Energy Drink Sprint Car Series enjoyed a scheduled off-weekend last week, but now it’s back to business.

The Greatest Show on Dirt has five races remaining in 2021, and that sprint to the season-ending checkered flag resumes this Friday night at Lakeside Speedway in Kansas City, KS for the FVP Platinum Battery Showdown.

As the nights run out and the points grow closer, battles continue to heat up with the top-six in the standings all consumed in their own matchup. There’s Brad Sweet & David Gravel fighting for the ultimate crown, Carson Macedo & Donny Schatz dueling for a championship podium, and Logan Schuchart & Sheldon Haudenschild going at it for the fifth position.

Joining the full-time Outlaws in KCMO will be local Brian Brown, aiming to put the FVP #21 and his sponsors back in victory lane at their own race, which he did during the 2017 FVP Platinum Battery Showdown.

Let’s take a deeper dive into the biggest storylines to follow this week:

BRAD VS. DAVID: It’s not over until it’s over, and that’s certainly the case for the 2021 World of Outlaws championship. The gap between Sweet’s Kasey Kahne Racing #49 and Gravel’s Big Game Motorsports #2 currently stands at 92 points with five shows left. It’s a number that can go both ways, offering a comfortbale cushion if managed properly or presenting a worrisome challenge if anything at all goes wrong over the next three weeks. Undoubtedly, Sweet controls his own destiny, but crazier things have happened before.

If Gravel wore to sweep all five remaining races, he would still need Sweet to run 10th or worse in every event to steal the title away. With that being said, any DNF – something Sweet has avoided through 72 races – could drastically alter the outlook and give Gravel upwards of 40+ points in his favor.

For both drivers, they’ll admit 2021 hasn’t exactly been the dream season they envisioned when DIRTcar Nationals fired off the 80-race slate. They want Crown Jewels, the big money paydays that the Knoxville’s, Eldora’s, and Williams Grove’s of the world offer. Although none materalized for those two, the $150,000 check that comes with reaching the pinnacle of the World of Outlaws is still a nice goal to chase.

When it comes to Lakeside, these two championship contenders are opposities. The Big Cat ruled Kansas City at the 2016 FVP Platinum Battery Showdown and owns a solid 5.5 average finish in eight Outlaw outings at the 4/10-mile oval. In those same eight starts, Gravel has yet to crack the top-five and enters with a 10.8 average finish.

CARSON VS. DONNY: A mere four points is all that separates Carson Macedo’s Jason Johnson Racing #41 and Donny Schatz’s Tony Stewart/Curb-Agajanian Racing #15 in the battle for third in the championship.

Macedo, of Lemoore, CA, has been red-hot at times in his first full season with the Missouri based operation led by Phil & Brooke Dietz. The 25-year-old entered with six wins in his first 173 Series starts, then he teamed with JJR and it took him only 70 races to record 10 wins and a monumental $75,000 score at the National Open.

Schatz, of Fargo, ND, has endured more struggles, yet has somehow almost been more consistent than the young Macedo. The 10-time champion has only topped three shows this year, including his historic 300th at Dubuque in June, but does have 42 top-five finishes, almost more than champioship leader Brad Sweet.

The duo is separated by four points entering Lakeside, a track that Schatz has conquered in 2015 and 2019. For Macedo, his results at the Kansas facility has been rather different, placing 12th in both appearances when he was with Kyle Larson Racing.

LOGAN VS. SHELDON: The closest margin throughout the entire standings can be found in the battle for fifth between Logan Schuchart’s Shark Racing #1S and Sheldon Haudenschild’s Stenhouse Jr. / Marshall Racing #17. With five nights left, the pair of 28-year-olds are only two points and one position apart.

After a dismal summer stretch, Schuchart and his Drydene Performance Products crew have found another gear with an average finish of 3.9 in 11 races since September – not counting two innocent crashes that resulted in DNFs. The Hanover, PA native has fallen from a championship challener in 2020 to racing for fifth this year, but don’t let the numbers fool you, he’s the first to point out that Shark Racing is actually better than they’ve ever been.

For Haudenschild, the Wooster, OH native has already established career-highs in wins (8), top-fives (34), top-10s (51), and laps led (293). If it weren’t for all of the ill-timed incidents, Lil’ Haud is most definitely a championship contender aboard the NOS Energy Drink #17.

Both young stars have shown signs of brilliance at Lakeside as both have multiple podium finishes at the speedway. A victory for either would mark their first-ever win at the track and secure the fifth spot in points with four shows remaining.

DIDN’T TAKE LONG: Spencer Bayston and CJB Motorsports will enter Lakeside as the most recent World of Outlaws winner, scoring a statement $15,000 win at Port Royal on October 9 in only their fourth start together. It could be a sign of things to come as the 23-year-old pilot and the Carlisle, PA team have already announced their intentions to join the Series full-time in 2022.

The Lebanon, IN native is one of 12 drivers with multiple World of Outlaws wins this year, both being the first two of his career. He’ll chase a third score on Friday night at Lakeside, a track the former USAC National Midget superstar has yet to encounter with a sprint car.

With legend and uncle Danny Lasoski on the wrenches, Brownie has found a bit of extra speed in 2021 with 29 Series starts and 11 top-10 finishes under his belt. The 43-year-old veteran is one of only four drivers to lead laps every year over the last decade, a list that includes full-timers Donny Schatz, Brad Sweet, and David Gravel.

Around the Turn: The World of Outlaws NOS Energy Drink Sprint Car Series prepare for a Halloween weekend doubleheader with dates at Lawton (OK) Speedway on Friday, October 29 and Devil’s Bowl (TX) Speedway on Saturday, October 30. After that, #AllDirtRoads lead to The Dirt Track at Charlotte (NC) for the NGK/NTK World Finals on November 4-6.