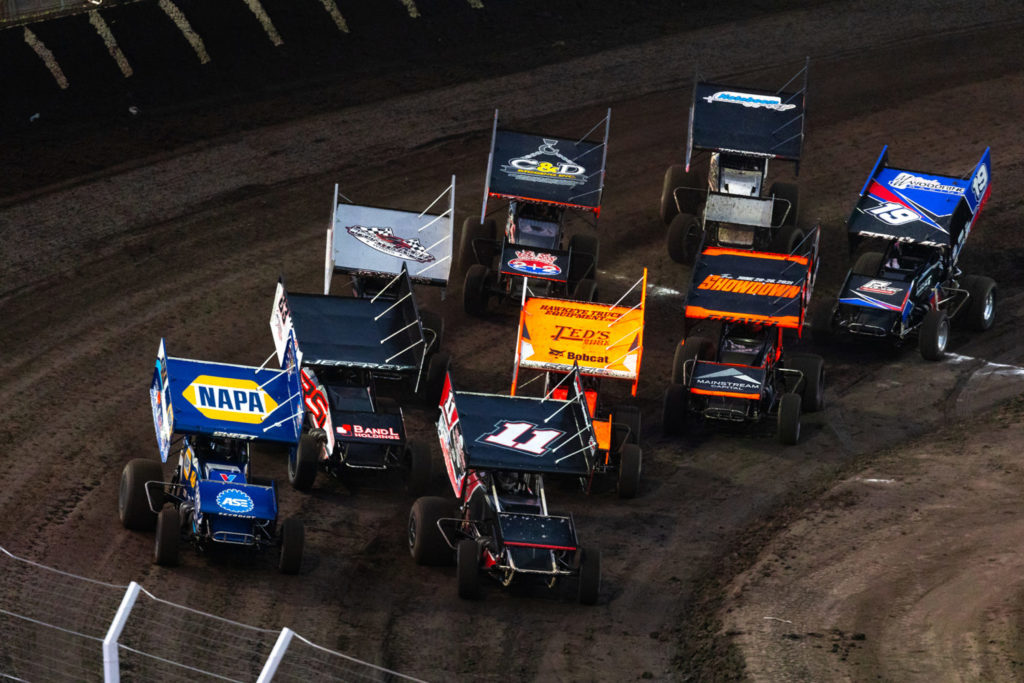 Scheduled for four consecutive nights, the World of Outlaws NOS Energy Drink Sprint Car Series will bring nearly 50 entries to the Brandon, SD 1/3-mile oval from Wednesday to Saturday. It begins with a standard makeup show, continues with preliminary programs on Thursday & Friday, and concludes with a mega $100,000-to-win High Bank Nationals finale.

HUMAN HORSEPOWER: At the right time, Sheldon Haudenschild and Stenhouse Jr. / Marshall Racing are the hottest team on tour. The NOS Energy Drink #17 has won five of the last nine races and swept Wisconsin’s Beaver Dam Raceway last weekend for a $30,000 performance. In two swift shows, the Wooster, OH native jumped from fourth to second in the championship standings and cut his deficit from Brad Sweet down from -74 points to -42 points.

The 29-year-old star has been a contender in each of his five appearances at Huset’s with the World of Outlaws, including a victory on September 5, 2020. Last year, Haudenschild finished sixth, fourth, and ninth in three shows at the Brandon, SD 1/3-mile. This week, with momentum on his side, the son of “The Wild Child” pursues the richest payday of his life.

HOME GAME HERO: David Gravel may hail from Watertown, CT, and car/track owner Tod Quiring may claim Windom, MN, but the Big Game Motorsports #2 dons the Huset’s Speedway sponsorship and colors, making this week’s trip to Brandon, SD a big one for the team. The second-year pairing currently sits third (-48) in the championship standings, but rides an unusual 18-race winless streak, the longest for Gravel in World of Outlaws competition since 2019.

The good news for Gravel and company is that Huset’s has transformed into one of his best tracks since climbing in the #2 with crew chief Cody Jacobs on the wrenches. The duo won three times in four starts at the track last year, and look to use that success to get back to their winning ways this weekend with a big $100,000 of their own boss’s money on the line.

PROVEN WINNERS: Along with Haudenschild and Gravel, another six previous World of Outlaws winners at Huset’s are expected to compete at the High Bank Nationals this weekend. Headlining that list are Series champions Donny Schatz in the Tony Stewart/Curb-Agajanian Racing #15 and Brad Sweet in the Kasey Kahne Racing #49.

Schatz leads all active drivers with four Outlaw wins at Huset’s coming in 2001, 2007, 2015, and 2016. The North Dakota native has kept his prowess alive at the South Dakota track with nine-straight top-10 finishes highlighted by results of second, third, and fourth last year.

Sweet was a 2016 winner at the 1/3-mile and has remained as consistent as ever with runs of fourth, second, and eighth last year at the track. The Big Cat and his NAPA Auto Parts #49 pride themselves on success come money time, and success is something the championship leader could certainly use this weekend as he rides a 17-race dry spell.

HUSET’S HITTERS: Four Huset’s Speedway winners from this season will be ready to do it again this week with $100,000 on the line. The venerable Brooke Tatnell & Lynton Jeffrey, along with up-and-coming racers Parker Price-Miller (McGhee #11) and Giovanni Scelzi (KCP #18) have each found victory lane at the track this year.

Through six shows in May & June, Justin Henderson (Tea, SD) leads the points over Matt Juhl (Tea, SD) and Austin McCarl (Altoona, IA). All three are proven winners at Huset’s and all three have finished in the top-five with the World of Outlaws, waiting for their elusive breakthrough with the Series.

STREAKING WHEN IT COUNTS: Haudenschild may have all the headlines at the moment, but a trio of other World of Outlaws stars are amid their own impressive runs entering the High Bank Nationals and will be chasing their first wins at Huset’s.

Logan Schuchart rides the longest active streak of consecutive top-10 finishes (10) with the Series entering this week. The Shark Racing #1S has yet to win since his initial triumph of 2022 at Bristol (TN) in April but has been wildly consistent over this stretch with seven top-fives and an average finish of 4.4 lately. He’ll have four chances at trying to top his Huset’s career-best of seventh this week.

Carson Macedo has the best average finish (4.0) with the Series over the last five races within June. The Jason Johnson Racing #41 is up to five total wins on the season and currently sits fourth (-52) in the championship standings ahead of the first big payday. The Lemoore, CA native has noticeably struggled at Huset’s of late, finishing 15th-15th-14th-18th in his last four starts, but still has frontrunning experience from a second-place in his 2020 debut to rely on.

Spencer Bayston is the most consistent driver over the last three races, nearly putting the CJB Motorsports #5 on the podium each night with runs of third, fourth, and fourth. He’ll be making his third appearance at Huset’s with a lot left to desire after debuting with finishes of 16th-17th in the McGhee #11. Before hitting the track, he and the Carlisle, PA-based operation will unveil a new look and new major sponsor on Wednesday.

The unique instance is thanks to a June 5 postponement which will be made up on Wednesday night. That show will be run as a standard World of Outlaws program with the traditional format before Thursday’s preliminary

ALL ABOUT POINTS: When the High Bank Nationals officially begin on Thursday, a special format will be used, similar to the Jackson Nationals in August. Accumulative points are the name of the name with heat race inversions adding some extra excitement, and Saturday’s lineups being set by preliminary performance. You can read the full details on Thursday-Saturday’s format HERE.

SIX-FIGURE PAYDAY: Tod Quiring and Huset’s Speedway will enter another elite club this weekend, becoming only the sixth event throughout the history of Sprint Car Racing to offer a six-figure payday. The Brandon, SD facility will join Iowa’s Knoxville Raceway, Ohio’s Eldora Speedway, and Ohio’s Mansfield Motorsports Park as the only four tracks to offer that rich of a check.

Through 42 contested six-figure showings, Donny Schatz stands out far and above the rest with 11 such victories. Next closest to the eventual Hall of Famer is the tremendous trio of Steve Kinser, Mark Kinser & Danny Lasoski all at four mega triumphs. Active drivers with a big $100,000+ win include Kyle Larson (2), Brad Sweet (2), Tim Shaffer (2), Tyler Courtney (1), David Gravel (1), and Kraig Kinser (1).

BIG BUCKS: Saturday’s $100,000-to-win finale isn’t the only highlight of the week at Huset’s as a nearly half-million-dollar purse is spread all throughout the week. The stakes only get higher with each passing night as the winning increase from $10K to $15K to $20K to $100K over four consecutive nights.