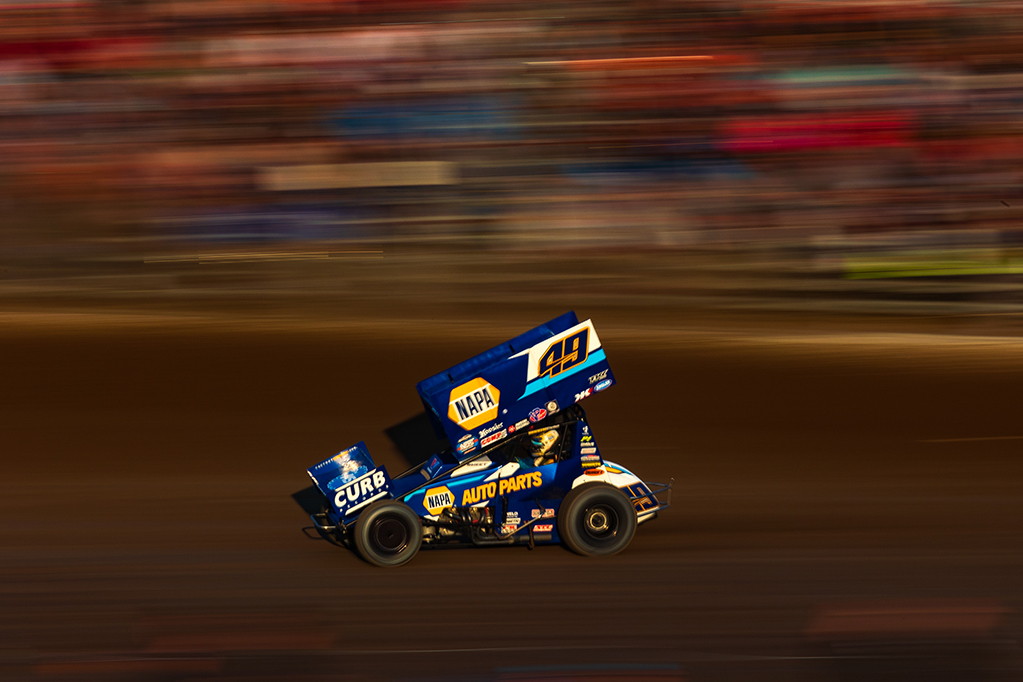 Brad Sweet said “winning gives you more confidence.” With that theory, you’d think he has every ounce of confidence in the world. Because he just doesn’t lose of late.

On Saturday, he led all 40 laps at Federated Auto Parts Raceway at I-55 to sweep the weekend and extend his career-best winning streak to four consecutive features with the World of Outlaws NOS Energy Drink Sprint Car Series. It’s his fifth win of the year through 11 races aboard the Kasey Kahne Racing, NAPA Auto Parts #49.

The two-time and defending Series champion still has an underdog-like mentality and it’s driving him to victory lane on a nightly basis.

“I feel like everyone still kind of thinks of us as the underdog, so maybe they’ll give us some credit now,” Sweet said with a smirk. “We feel really good right now. Winning give you more confidence. I’m in a good place as a race car driver, the car is handling great, and this crew is doing an amazing job. We came from ninth last night and did it from the pole tonight, so we’ve won from both spectrums.”

Earning the pole position following his win in the DIRTVision Fast Pass Dash, the odds were already stacked against Sweet, as no pole-sitter had won all year with the World of Outlaws. He and the KKR #49 crew were motivated to snap that streak and extend their own, though.

The Grass Valley, CA native led the opening lap and never relinquished command, extending another streak to 62 consecutive feature laps led. His Saturday night sweep wasn’t without challenge, though, as Gio Scelzi and Sheldon Haudenschild both kept him honest.

Scelzi had a shot through the opening stages and got close on Lap nine with the aid of lap traffic, but the savviness of Sweet’s finesse though the back-markers was too much to bare. When Scelzi faltered, Haudenschild rose to second and came within six-tenths of Sweet’s #49, but again his moves in traffic separated himself from the rest.

A Lap 25 red flag for Tucker Klaasmeyer was the only stoppage of the race and set up a double-file restart, but it could do no harm in slowing Sweet’s roll.

He cruised around the cushion just inches off the wall and then dipped low, slid through the middle, and made all the right moves through the last 15 laps to run off with a victory by 1.937-seconds. It was the 63rd of his World of Outlaws Sprint Car Series career.

“We were off at the end last night, but tonight we made a small change and it was much better,” Sweet noted on his setup. “I felt like I had more grip and could move around in traffic with more ease. That’s the key to winning these; even when you win, you have to come back better the next night. It’s been through 11 races, but it’s an 83-race schedule. We want to enjoy these, but our heads are down and we’re looking to win a lot more of these.”

“Brad was just on top of this weekend,” Haudenschild spoke on challenging Sweet. “They’re the guys to beat right now and we’re chasing them as hard we can. The car was really good, but we’ll keep working on it to try and get better. We’ve got some good tracks coming up, so I’m looking forward to that.”

Rounding out the podium with his second top-three finish of the year was Gio Scelzi in the KCP Racing #18. After going second-quick, they recovered from an engine change to deliver another strong finish.

“I ran as hard as I could for 40 laps,” Scelzi said on chasing Sweet. “He just makes such good moves through traffic, he’s hard to keep up with. We were a third-place car and a third-place driver tonight. It’s honestly relieving though. We were good in qualifying, good in the heat, and good in the feature. Feels like forever since Ive been here on the podium at Volusia.”

Logan Schuchart scored his 11th top-ten finish in 11 races by virtue of a fourth-place run for his Shark Racing, Drydene Performance Products #1S. Following him was James McFadden with his second top-five of the year in the Kasey Kahne Racing, Karavan Trailers #9.

Closing out the top ten at I-55 was Slick Woody’s QuickTime qualifier David Gravel, Kraig Kinser continuing his hot start, Carson Macedo with another consistent finish, Aaron Reutzel racking up another top-ten, and Jason Sides with his first top-ten of the season.

UP NEXT – The World of Outlaws NOS Energy Drink Sprint Cars will face an Indiana doubleheader next weekend. The Greatest Show on Dirt heads to Kokomo Speedway on Friday, April 9 and then Tri-State Speedway on Saturday, April 10.