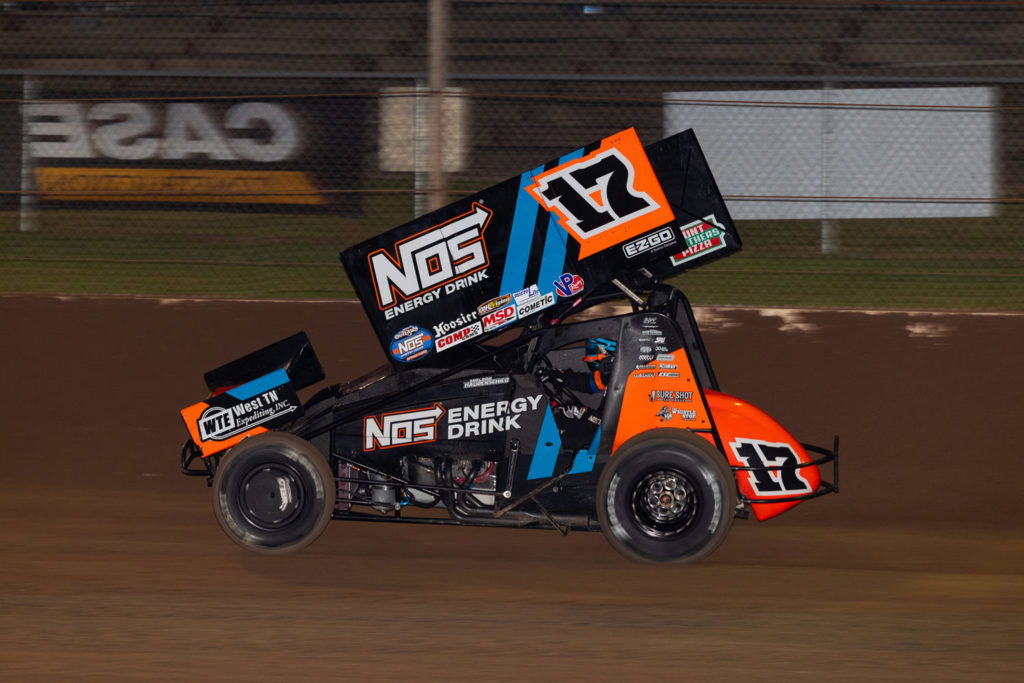 Much like Missouri’s Federated Auto Parts Raceway at I-55, Sheldon Haudenschild has developed a unique knack for winning at Wisconsin’s Beaver Dam Raceway.

Of the 22 venues that he’s won his 29 World of Outlaws NOS Energy Drink Sprint Car Features at, I-55 and Beaver Dam are the only two tracks that he’s conquered at least three times, and the only two that he’s topped on back-to-back nights. In fact, each double-dip paid out a cool $20,000 to the Wooster, OH superstar.

Starting from third in Saturday’s 40-lap finale of the Jim “JB” Boyd Memorial, Haudenschild bided his time through the opening stage, but quickly turned up the heat when he saw an opportunity ahead. He wheeled by early-leader Spencer Bayston on Lap 12 and never looked back, lapping his way inside the top-10 and never seeing another challenge for the next 29 laps.

There was a brief moment of trouble on the final circuit when a spun Brad Sweet caused a caution and set up a green-white-checkered restart, but it was nothing that could deter Haudenschild’s torrid pace. He ripped away again off the restart and cruised to his seventh World of Outlaws win of the season, and the 29th of his budding career.

“I was telling Ricky [Stenhouse Jr.] that I need to start winning these Saturday night shows that pay a little more money,” Haudenschild joked.  “I feel like I always win the prelim races and just miss out on winning the finale, but we checked that off tonight.

I thought somehow it was gonna slip away when that caution came out on the last lap, but sure enough, we got it done tonight. I was ripping the top really good so I figured as long as I got a good start and didn’t push through turns one and two, I would be fine.”

Once in control on Lap 12, Haudenschild’s closest contenders were primarily Spencer Bayston, Jacob Allen, and Logan Schuchart. He fought off a quick slider from Bayston, then kept Allen at bay through thick lap traffic, and survived with Schuchart on his tail during the final restart.

Ultimately, though, it was none of those three claiming runner-up honors behind Haudenshild’s #17. That privilege went to Donny Schatz, who put together a stellar restart on Lap 39 to complete an eighth-to-second drive in the Tony Stewart/Curb-Agajanian Racing, Ford Performance, Advance Auto Parts #15.

“We got really good after about 5-10 laps and I can’t compliment this new motor from Ron Shaver enough,” Schatz said. “We’ve been trying and trying different things and we’ve now got something that works exceptionally well with my right foot. That makes me happy and I think that is showing with our performance tonight.”

Rounding out the podium and keeping his hot streak alive was Logan Schuchart, who scored his 10th consecutive top-10 finish in the Shark Racing, DuraMAX Oil, Drydene Performance Products #1S.

“It’s better than what we’ve done in the past here, so I’m happy about that,” Schuchart said. “We’re still not exactly the fastest car, though, so we need to go to work on some things with these big races coming up.”

After leading the opening 12 laps, Spencer Bayston fell back to finish fourth aboard the CJB Motorsports #5. The leading Kevin Gobrecht Rookie of the Year contender fell back as far as ninth with five to go but used a spectacular green-white-checkered restart to drive forward for his 10th top-five of the year.

David Gravel followed him with a +8 run from 13th-t0-5th that not only netted him the KSE Hard Charger Award, but also his 300th career top-five finish with the World of Outlaws NOS Energy Drink Sprint Car Series. The Watertown, CT native now heads to the home track of his car owner, Tod Quiring, with a huge four-night stretch at Huset’s Speedway next.

Haudenschild (2021-22) joined Brad Sweet (2019-20) as the only two drivers to win three-straight Beaver Dam races through 31 appearances by World of Outlaws. He also joined Sweet and Joey Saldana in the category of repeat champions at the Jim “JB” Boyd Memorial.

Carson Macedo started the night by topping My Place Hotels Qualifying at 11.501 seconds, earning his Series-leading fifth Slick Woody’s QuickTime Award of the season, and the 13th of his short career.

UP NEXT (Wed-Sat) – The World of Outlaws NOS Energy Drink Sprint Car Series heads to Huset’s Speedway for four consecutive nights of racing next week. It starts with a standard makeup show on Wednesday and carries into the inaugural High Bank Nationals on Thursday-Saturday with a mega $100,000-to-win finale that caps it all off. Fans can BUY TICKETS HERE, or watch every lap LIVE on DIRTVision.