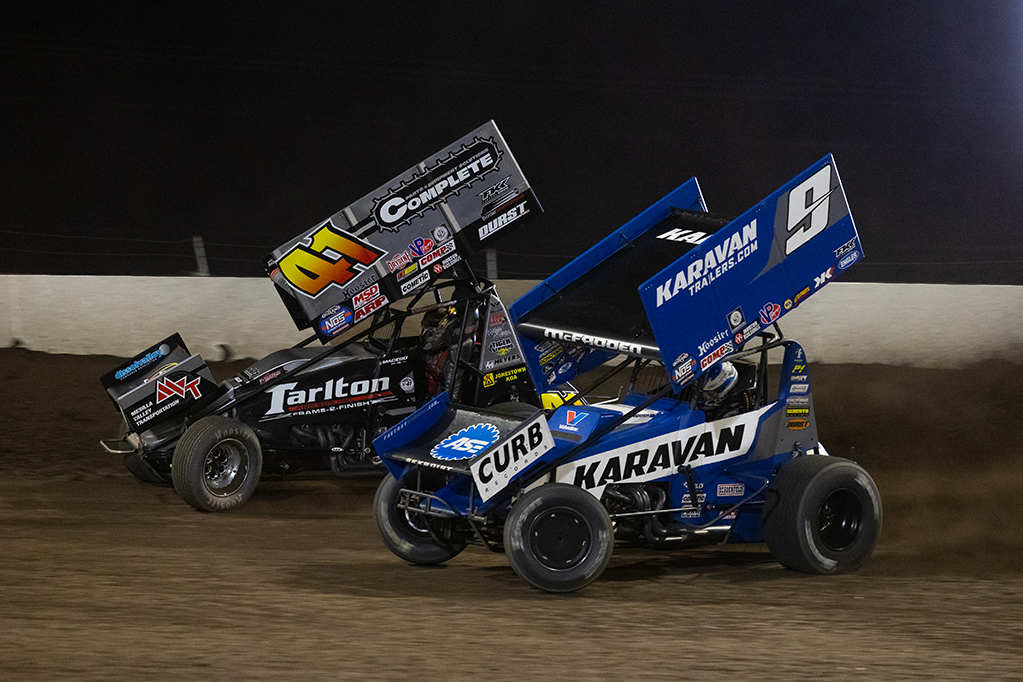 The World of Outlaws NOS Energy Drink Sprint Car Series did it again on Saturday night.

Visiting a sold-out crowd at Tri-State Speedway in Haubstadt, IN, The Greatest Show on Dirt lived up to its name. The 40-lap feature on the 1/4-mile offered up five different leaders, drama that you couldn’t even dream of, and a last-lap pass to send the crowd home happy.

It started with Aaron Reutzel out front before Tyler Courtney led in pursuit of his first-career win, and then Sheldon Haudenschild drove to the lead and ran away until a flat tire soured his run with seven laps left. Ultimately, it came down to a duel between Carson Macedo and James McFadden on the final restart.

They swapped sliders, exchanged some contact, and eventually Macedo snookered McFadden to win it by 0.398-seconds.

“I know he’s probably upset with me, but I really wanted to win that race,” Macedo noted. “These races are tough to win, I’m gonna give it everything I have. James [McFadden] is a great driver and I have the utmost respect for him; I want to run everybody clean. I beat him to the line there and just tried to protect the bottom the best I could.”

Before eighth-starting Macedo and 11th-starting McFadden waged war in the end, the beginning was between the front row of Courtney’s Clauson-Marshall Racing #7BC and Reutzel’s Roth Motorsports #83.

Reutzel, of Clute, TX, paced the opening four laps before Courtney, of Indianapolis, IN, drove by on Lap 5. It quickly became a non-wing affair as former USAC standouts Courtney and Hunter Schuerenberg of Sikeston, MO ran 1-2 with both drivers chasing their first-career World of Outlaws win.

Courtney, AKA Sunshine, led a race-high 19 laps aboard the NOS Energy Drink TURBO machine until Haudenschild in his own NOS Energy Drink whip wheeled by him to take command on Lap 24. Mastering lap traffic, Haudenschild ran off to a 2+ second advantage before a flat left rear tire sent his Stenhouse Jr. Marshall Racing #17 from the lead to the work area on Lap 33.

Inheriting the lead with seven to go, Macedo brought the field back to life in his Jason Johnson Racing #41 and immediately received a challenge from McFadden in the Kasey Kahne Racing #9. They ran side-by-side for a handful of laps until J-Mac finally cleared his slider coming to the white flag.

McFadden officially led Lap 39, but Macedo was quick to cross under him and steal it back entering turn one. The duo made contact fighting for real estate on the bottom and nearly allowed Courtney to sneak by them both as they went down the backstretch. Macedo made the move to go low in the final two corners and did just enough to survive McFadden’s onslaught.

For Macedo, of Lemoore, CA, it was his second win at Tri-State, his second win of the 2021 season, and his eighth-career win with the World of Outlaws NOS Energy Drink Sprint Car Series.

“I could see him peeking his nose and I knew I needed to stay in front or he would pull the trigger hard enough,” Macedo mentioned on his strategy. “I saw the white come out and knew I needed to capitalize. This is a great win for our Jason Johnson Racing crew. I’m glad I can get Phil, Nate and Clyde back to victory lane.

“He was racing like a bit of a d**k head to be honest,” McFadden said. “He chopped me and put me over the tires and jammed it off the fence a couple of times. I kept giving him room and I probably shouldn’t have; I should have parked him and cleared him. I feel bad for letting my team down. Second is decent, but I probably needed to be a bit ruder.

For the second night in a row, the third-place finisher collected his first-career podium finish with there World of Outlaws. This time it was Tyler Courtney, a former USAC National Midget and Sprint Car champion adventuring into the winged world with Clauson-Marshall Racing.

“I think it was just inexperience in lap traffic,” Courtney offered on where he lost the lead. “I’ve had more laps around here than those guys, but I just struggled with where to put the car. To rebound tonight with a podium against the best drivers in the country, maybe the world, is really awesome for our team.”

Hunter Schuerenberg earned his second-career World of Outlaws top five, and first since Tri-State in 2018, aboard the Vermeer Motorsports #55. Early leader Aaron Reutzel wrapped up the top five finishers in Saturday’s show.

Rounding out the top ten at Haubstadt was David Gravel in sixth, Brad Sweet in seventh, Carson Short in eighth, Justin Peck in ninth and Ian Madsen in tenth.

UP NEXT – The World of Outlaws NOS Energy Drink Sprint Car Series takes to Lawton (OK) Speedway on Friday, April 16 and Devil’s Bowl (TX) Speedway on Saturday, April 17. After that, it’s the Bristol Throwdown on April 22-24.