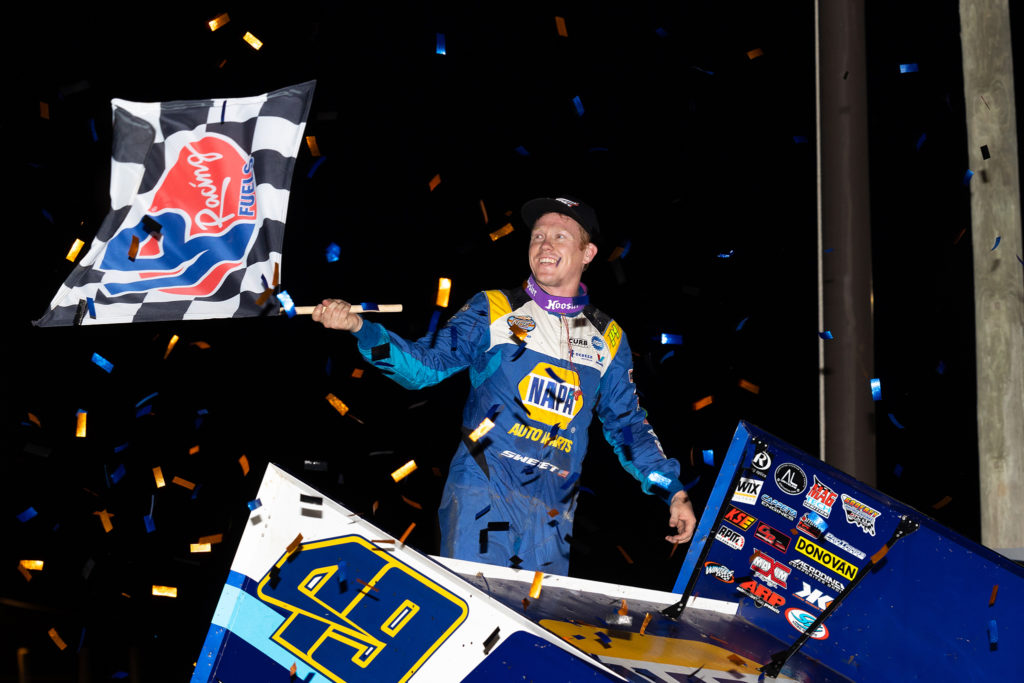 At this point, Brad Sweet is an adopted cheesehead.

The Grass Valley, CA native extended his remarkable reign on the state of Wisconsin by scoring his first win in Wilmot Raceway’s Badger 40 on Saturday night – which follows his sweep at Cedar Lake Speedway last weekend.

It wasn’t an easy win for the two-time and defending World of Outlaws NOS Energy Drink Sprint Car Series champion, as he and pole sitter Logan Schuchart had to wade through thick lap traffic whilst battling for the top spot.

The Big Cat finally assumed the point on Lap 22 and never looked back, although Schuchart made it extremely close (0.160-seconds) thanks to traffic on the final lap.

For the Kasey Kahne Racing, NAPA Auto Parts #49 team, its their 13th victory of 2021 as they build their biggest advantage yet in the championship chase. More important than that, they’re riding a hot streak entering the illustrious “Month of Money.”

“I thought Logan and I were really even tonight,” Sweet mentioned. “I didn’t know where to go on that restart when he got back to my outside. I tried to slide across before he got to me, but we kind of met on the cushion. This is a tight track with some really tight spots, but we were able to hang on. Another great confidence booster heading into this big month we’ve got coming.”

Fighting off a relentless cell of afternoon drizzles, Saturday’s Badger 40 was a huge triumph for the Wisconsin fans who packed the Wilmot, WI 1/3-mile and beat Mother Nature to see The Greatest Show on Dirt.

Once underway following the rain delay around 7pm, Sweet was instantly the man to beat. He set Slick Woody’s QuickTime, won his Drydene Heat Race, and placed second in the DIRTVision Fast Pass Dash to Schuchart.

The 40-lap NOS Energy Drink Feature was tough to get going early on as a trio of stoppages created a quick #OpenRed for teams to re-fuel cars. Included in those stoppages was championship runner-up David Gravel catching the cushion and flipping in turn four on the first lap. He returned and charged from 24th-to-9th, but flipped again and ended his night on Lap 30.

Up front, it was a cat and mouse game as the leaders chased each other through lap traffic. Schuchart’s ultimate downfall came just beyond halfway when the traffic bottled him on the bottom and allowed Sweet to rip the top around the #1S.

A shocking caution for third-running Sheldon Haudenschild offered one final chance to snooker Sweet for Schuchart, but the #49 was too strong and survived just fine in clean air.

The win was the 71st of Sweet’s World of Outlaws NOS Energy Drink Sprint Car Series, and it also marked the 50th career victory for his Kasey Kahne Racing Crew Chief, Eric Prutzman.

At 11 total wins (6 at Cedar Lake, 4 at Beaver Dam, 1 at Wilmot), Wisconsin is the winningest state of Sweet’s World of Outlaws career.

“We love coming to Wisconsin,” Sweet spoke on the atmosphere. “The fans here are incredible. They come out and support us at every track, and they come drink beer with us afterwards too. It’s like a second home.”

A disappointing, but strong second-place finish was the end result for Logan Schuchart after pacing the opening 22 laps aboard the Shark Racing, Drydene Performance Products #1S.

“I was just hoping we’d get back in lap traffic,” Schuchart thought. “You try to be a respectful driver and want to race everyone the right way, but I just need to do what Brad did. You get to some of these lap cars and they race you like they’re the ones battling for the lead. I need to be more aggressive and not so much mr. nice guy. We had an awesome race there, though, glad the fans came out and packed the place.”

“We were decent, you know we could stick with them,” Schatz said. “We just needed some more traffic. That one restart we went from sixth-to-third, but the caution killed us. We’re starting to get things going the right way, though. This is a good time to find some of that momentum.”

James McFadden finished fourth aboard the Kasey Kahne Racing, Karavan Trailers #9 with an impressive recovery after visiting the work area and going tail-back on the opening lap. Aaron Reutzel in the Roth Motorsports #83 rounded out the top-five on Saturday night.

Closing out the top-10 at Wilmot was Carson Macedo of Lemoore, CA in the Jason Johnson Racing #41, Sheldon Haudenschild of Wooster, OH in the Stenhouse Jr. / Marshall Racing #17, Scotty Thiel of Sheboygan, WI in his family-owned #73, Brock Zearfoss of Jonestown, PA in the Zearfoss Racing #3Z, and Jason Sides of Bartlett, TN in the Sides Motorsports #7S.

UP NEXT: The “Month of Money” begins next week for the World of Outlaws NOS Energy Drink Sprint Car Series. It starts on Tuesday, July 13 with the 33rd annual Ohio Logistics Brad Doty Classic at Attica Raceway Park. On Wedesdnay-Saturday, Eldora Speedway hosts double Kings Royals with $175,000-to-win on Thursday and Saturday night.