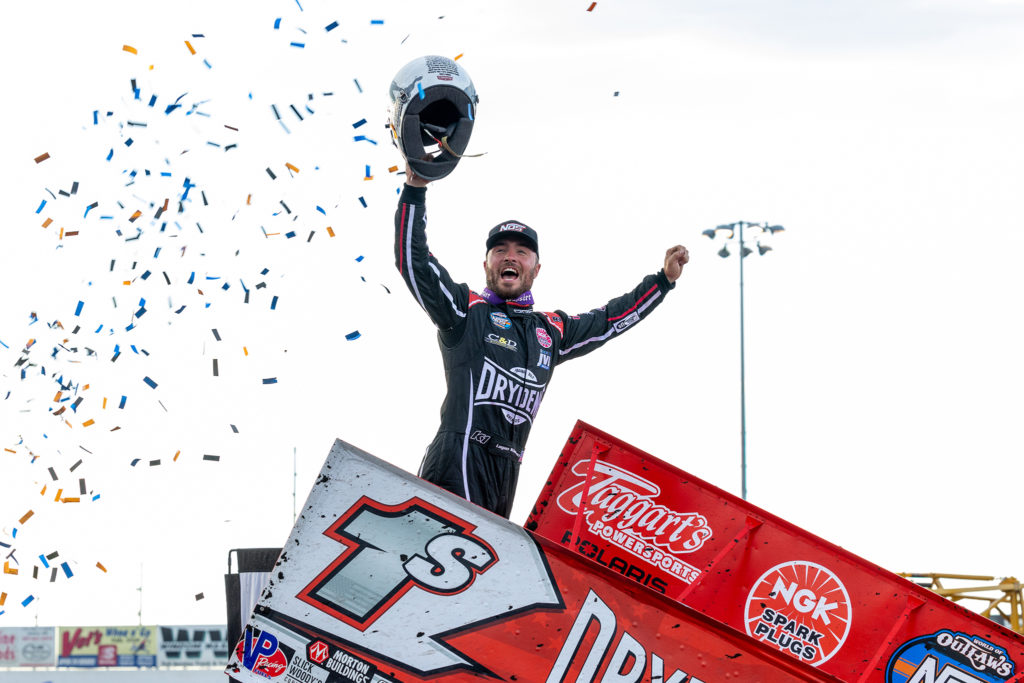 Logan Schuchart earned the richest win of his life on Sunday night at the 43rd annual AGCO Jackson Nationals.

With $50,000 up for grabs, the Hanover, PA native piloted the Shark Racing, Drydene Performance Products #1S to one of the most dominating victories of his career at Jackson Motorplex.

After slipping back on the initial start, Schuchart took full advantage of the only restart of the race on Lap 7 and roared back to the top spot over David Gravel. From there, it was game over. He checked out and crossed the line with a mammoth margin of victory at 4.454-seconds.

Amid a trying season, an ecstatic Schuchart knew this is just what his team needed to boost their confidence and get some momentum rolling with even more money on the line come July and August with the World of Outlaws NOS Energy Drink Sprint Car Series.

“50 grand,” Schuchart screamed as he climbed from the cockpit. “This is big for Shark Racing. There are so many people that have backed this team from day one, and this is for all of them. Hats off to my crew, this is a long 11 day stretch with lots of racing. I’ve got the easy job, I just have to race, but these guys bust their tails for me. You know my grandpa [Bobby Allen] is 77-years-old, he’s still out here going up and down the road allowing us to live our dreams . Racing is all he wants to do.”

Speaking of Bobby Allen, Schuchart’s 26th career World of Outlaws victory on Sunday night brings him to only four away from tying his grandfather, who achieved 30 Series victories throughout his Hall of Fame career.

Prior to Schuchart’s back-to-back bid in 2020 and 2021, Allen himself was a Jackson Nationals champion in 1986 during the 8th annual running. Now, he’s still standing on the front stretch, but as a proud car owner, grandfather to Logan, and father to Jacob Allen, who placed 10th in the finale.

With his own experience to rely on, Allen knows just how big another Jackson Nationals crown was.

“All of these big races are great to win, but this one brings a lot of momentum,” Allen admitted. “We’ve been behind on motors lately, really everybody has. My nephew [Newman’s Racing Engines] does our motors and does a great job. We’re going to this one out and save it for Knoxville Nationals, and then we’ll get another ready for Kings Royal. This deal is all about having a good motor, but also knowing what to do with it.”

After leading 25 laps on Thursday night before letting the win slip away to Kerry Madsen in lap traffic, Schuchart refused to let that happen again with big money on the line.

Taking the lead on Lap 8, he never looked back and set a torrid pace as he sliced and diced his way through the back-markers.

“You never know how hard to push when you’re leading,” Schuchart explained. “The other night I was conserving tires and fuel, then Kerry blew my doors off. I tried to stay in the gas as much as possible tonight and really used the lap cars to advantage. Props to the Jackson Motorplex crew, this is probably the best track we’ve had all week and it was during the day.”

Crossing the finish line behind Schuchart by 4.454-seconds was David Gravel in the Big Game Motorsports #2. The Watertown, CT native led the opening seven laps after an incredible Lap 1 charge from row two, but the only restart of the race proved costly as he fell to second and had to settle for a $20,000 runner-up check.

“I wish I got another chance at that restart,” Gravel stated. “I stumbled and got a good run on me, I tried to be defensive, but once he got by he was gone. He definitely had the dominant car, but just wish I had a chance to control the race in the lead. I’d probably do a couple things different knowing how good the track ended up. It’s a little disappointing, but still a good week for us.”

The Kasey Kahne Racing, NAPA Auto Parts #49 closed out the podium with Brad Sweet of Grass Valley, CA at the wheel. The current World of Outlaws championship leader was rewarded with $10,000 for his third-place finish.

“It was tricky,” Sweet said. “The track held up so much better than we thought. Logan definitely had the best car and he was just gone. I thought we had something for David to get second, but I just couldn’t make the moves we needed in lap traffic. We’ve got a lot to look forward to this summer.”

Kerry Madsen finished fourth aboard the Tony Stewart/Curb-Agajanian Racing #14 after sweeping the two preliminary nights. Closing out the top-five at the Minnesota 4/10th-mile oval was Carson Macedo in the Jason Johnson Racing #41.

Rounding out the top-10 in Sunday’s Jackson Nationals finale was California’s Shane Golobic in sixth aboard the NOS Energy Drink #17W, Ohio’s Sheldon Haudenschild in seventh with his own NOS Energy Drink #17 entry, Indiana’s Parker Price-Miller in eighth driving Guy Forbrook’s #5, Australia’s James McFadden in ninth aboard the Kasey Kahne Racing #9, and Pennsylvania’s Jacob Allen in the second Shark Racing #1A with a tenth-place bid.

UP NEXT: An Independence Day Spectacular awaits the World of Outlaws NOS Energy Drink Sprint Car Series next weekend. The Greatest Show on Dirt will travel to New Richmond, WI for back-to-back nights at Cedar Lake Speedway on Friday and Saturday, July 2-3.