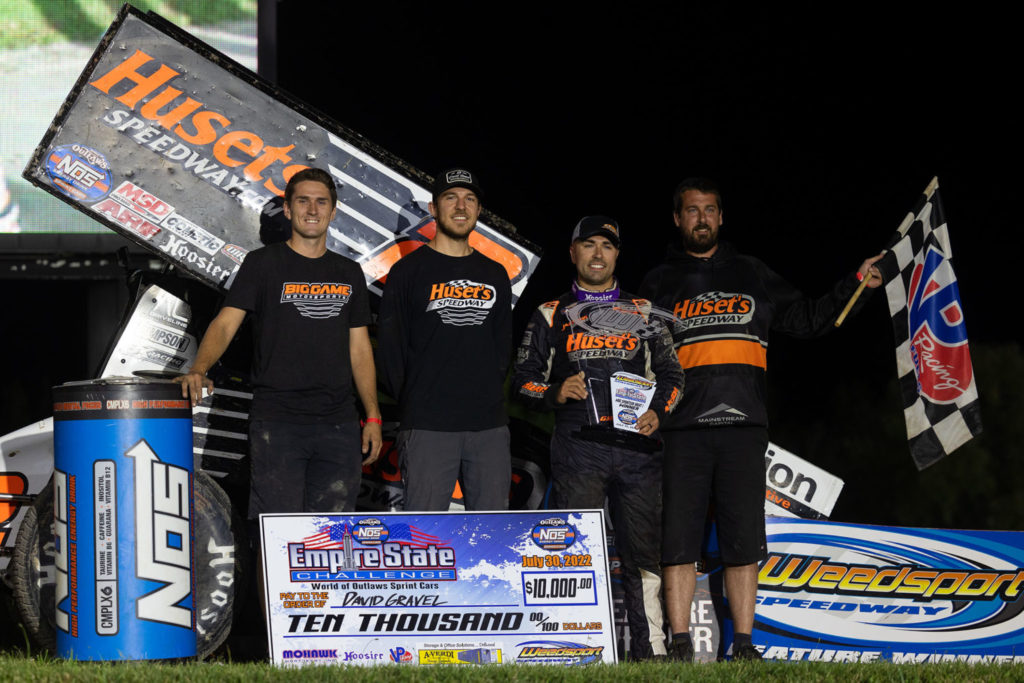 David Gravel and Big Game Motorsports are quickly becoming one of the hottest teams at the perfect time with the World of Outlaws NOS Energy Drink Sprint Car Series.

The Watertown, CT native crushed the field on Saturday night at New York’s Weedsport Speedway, earning his second-straight win at the track as Empire State Challenge Weekend kicked off. The 30-year-old owned a monstrous 8.034-second lead at one point in what was arguably the most dominant performance of the 2022 season.

Starting from the outside pole, Gravel settled into second as Donny Schatz controlled the opening 12 laps of the 30-lap affair. He quickly made his presence felt in the Huset’s Speedway, Jackson Motorplex, Billion Automotive #2, pouncing on an overwhelmed #15 in lap traffic on the 13th circuit.

He cruised to the lead on Lap 13 and never looked back, ultimately surviving for a 2.970-second margin of victory following the final restart with three laps remaining. It’s his 74th career World of Outlaws NOS Energy Drink Sprint Car Series win and his fifth of the season, with three of those coming within the last eight races over two and a half weeks.

The gap to Brad Sweet’s championship advantage dwindled from -54 to -46 points, but more importantly, Gravel and his Big Game crew are gaining some big momentum ahead of high-paying events like the Ironman 55 (Aug. 5-6), Knoxville Nationals (Aug. 10-13), Jackson Nationals (Aug. 18-20), Skagit Nationals (Sept. 1-3), and Gold Cup Race of Champions (Sept. 8-10).

“My guys gave me an unbelievable car,” Gravel said in Victory Lane. “That’s probably the best car I’ve had all season and it came at one of the toughest tracks we race at. Cody [Jacobs], Trey [Bowman], and Zach [Patterson] are busting their butts right now. We had a little time off to regroup and it’s paying off. After feeling so stale and average there for a long time, it feels good to be in the contention almost every night again.”

Scoring his 10th podium finish of the season was 10-time Series champion Donny Schatz with a runner-up effort. The Tony Stewart/Curb-Agajanian Racing, Ford Performance, Carquest Auto Parts #15 led the opening 12 laps from the outside pole, but lap traffic was the final straw that let Gravel slip by the Fargo, ND native. He settled for a P2 finish, extending his stretch of stellar finishes at the Weedsport, NY oval.

“I don’t know if we were gonna get by him, I think he was in another league,” Schatz said on the final caution. “I felt decent at the start, but kept losing and losing him once he got me in traffic. That yellow gave us an opportunity, but there was nothing to capitalize on. I need to figure out how to get the grip at the end of races, we used to be able to do that but it’s a different day and tires are different.”

Continuing his magical stretch of home state performances against the World of Outlaws was Paulie Colagiovanni with a third-place effort. The Cicero, NY native was a close runner-up finisher at Ransomville last year and finished third at Weedsport on Saturday, earning his second podium finish in his seventh-career start. The potential is most certainly there for the #10 pilot to threaten for his first-career Series win on Sunday night.

“This one has been circled on the calendar all year long and I’ve been thinking about it all week,” Colagiovanni told a thrilled New York crowd. “We struggled with our setup earlier this season when we ran against them at Volusia, but we’re hooked up now. I think we can provide some stiff competition for these Outlaws tomorrow night.”

David Gravel’s 74th career World of Outlaws NOS Energy Drink Sprint Car Series win brings him two away from tying Brad Sweet for 11th on the All-Time Win List. His fifth win of the 2022 season ties him with Brent Marks for the third most on tour behind Sheldon Haudenschidl (8) and Carson Macedo (7).

Carson Macedo started the night in a familiar fashion by topping My Place Hotels Qualifying at 14.310 seconds around Weedsport Speedway. The Jason Johnson Racing #41 is up to eight QuickTime Awards this season, a Series best mark with the World of Outlaws in 2022.

“Lightning” Larry Wight of Phoenix, NY earned KSE Hard Charger honors with a 17th-to-7th drive in the #99L. It’s his third World of Outlaws top-10 finish in only seven starts with the Series.

UP NEXT (Sun) – The World of Outlaws NOS Energy Drink Sprint Car Series prepares to make its only stop in The Empire State next weekend with a New York’s Weedsport Speedway hosting shows on Saturday and Sunday, July 30-31. Fans can BUY TICKETS HERE, or watch every lap LIVE on DIRTVision.