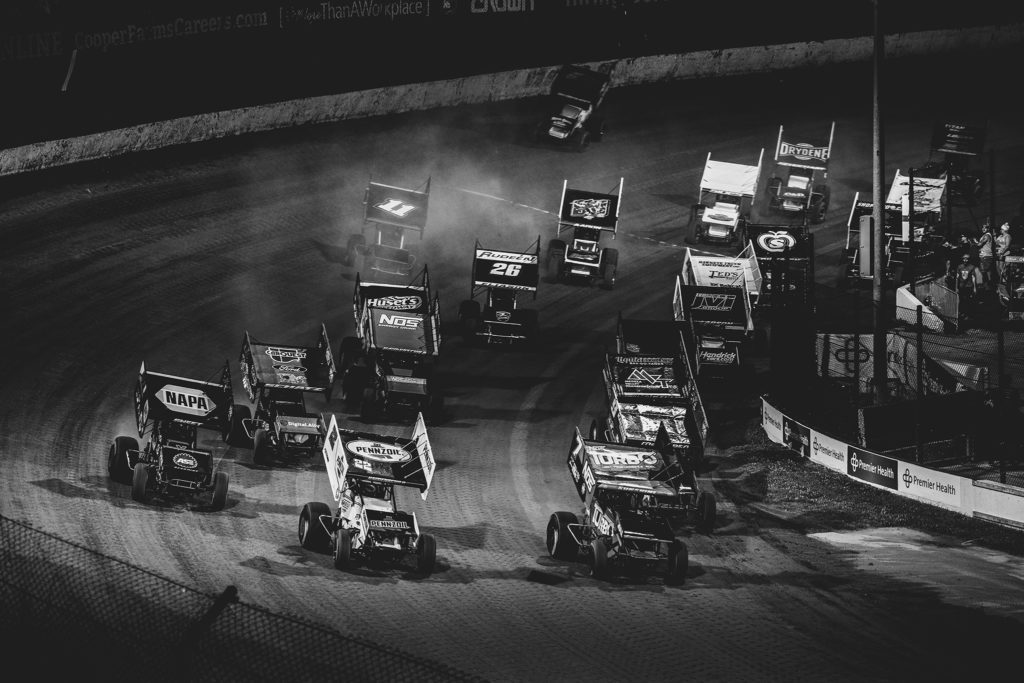 Three weeks in Washington and California was fun, but now it’s time to get down to business with 11 races left this season. The chase for the championship heats up this weekend as The Greatest Show on Dirt returns east for the first time since July.

Eldora Speedway’s BeFour the Crowns Showdown starts off the weekend on Friday, September 24 with the seventh and final World of Outlaws event at The Big E this year.

Lernerville Speedway carries the torch on Saturday, September 25 as the Commonwealth Clash takes center stage at the Sarver, PA facility.

LAST CHANCE: Eldora Speedway and Lernerville Speedway are two of only eight tracks on the schedule with multiple visits throughout the season, and this weekend is the final stop at both of them.

At Eldora’s 1/2-mile, the Series has already hosted six Features this year. Brent Marks and Sheldon Haudenschild split scores during Let’s Race Two in May, Carson Macedo won both preliminary races at the Kings Royal, and Tyler Courtney and Kyle Larson claimed the $175,000 paydays in the 38th and 37th Kings Royal in July.

PULLING AWAY: The consistency of Brad Sweet and Kasey Kahne Racing is on full display as the #49 dynasty continues to march towards a third consecutive World of Outlaws championship. Entering this weekend, The Big Cat is on a streak of 17 consecutive top-10 finishes and eight-straight top-five results with four podiums in-a-row. Over that stretch, Sweet has outran Gravel and extended his points lead in five of the last six nights.

The Grass Valley, CA native will look to build on his +156 margin this weekend at two of his favorite tracks. In fact, he’s won at both Eldora and Lernerville on three different occasions, a feat he’s accomplished at nine tracks during his 74-win career with The Greatest Show on Dirt.

CHASING A NEW CROWN: The most noteworthy crown at Eldora Speedway is given out during July’s Kings Royal, but don’t sleep on September’s 4-Crown Nationals. An idea devised by Johnny Vance Jr. of Aristocrat Products, the event began in 1981 with the King of the Outlaws Steve Kinser swooping in to steal the USAC loot in two of the three open-wheel Features. Other Outlaw icons such as Ron Shuman, Jack Hewitt, Brad Sweet & Kyle Larson have found their own share of glory at the race.

COMMONWEALTH KINGS: The “Big Three” over the past decade in the NOS Energy Drink Sprint Car Series is undoubtedly Donny Schatz, Brad Sweet, and David Gravel. Those three are also undoubtedly the rulers of Lernerville’s Commonwealth Clash, as the only drivers with multiple scores since the date was moved to the fall in 2010.

Schatz, who owns nine wins at Lernerville, is trying to make the Sarver, PA oval his eighth track with 10+ World of Outlaws wins. He and the Tony Stewart/Curb-Agajanian Racing #15 topped the Commonwealth Clash in 2010 and 2016.

Sweet is in rarified air when it comes to the Commonwealth Clash, becoming only the second driver to win back-to-back titles along with Steve Kinser. He and the Kasey Kahne Racing #49 owned the fall event in 2018 and 2019.

Gravel enters as the defending Commonwealth Clash champion, winning the 2020 race with the Jason Johnson Racing #41 crew. He also topped the 2017 race with CJB Motorsports, and now eyes a score in the Big Game Motorsports #2.

BACK AT HOME: After three weeks on the west coast, four full-time Outlaws get the pleasure of returning to racing in their home states this weekend.

Wooster, OH’s Sheldon Haudenschild leads the charge to The Buckeye State on Friday and looks to join his father Jac Haudenschild as a 4-Crown Nationals winner. Earlier this May, he scored his first-career win at The Big E in a late-race thriller by overtaking Donny Schatz. The NOS Energy Drink #17 enters this weekend fifth in the championship standings with eight wins this year for Stenhouse Jr. Marshall Racing.

KING SUNSHINE: Tyler Courtney will return to Eldora Speedway for the first time since becoming King Tyler XXXVIII with his $175,000 upset at the Kings Royal in July. In his first full year as a winged sprint car driver, Courtney and Fishers, IN based Clauson-Marshall Racing have taken the scene by storm. On top of his crowning moment at the Kings Royal, the 27-year-old has dominated the All Star Circuit of Champions with arguably the most impressive rookie season in Series history. He’s on the verge of clinching that championship thanks to eight wins and 25 top-fives through 46 starts in the NOS Energy Drink TURBO #7BC.

It’s not just a Kings Royal crown that makes Courtney a threat on Friday night, but his entire Eldora resume is off the charts. The Indianapolis, IN native has made a living off the Rossburg, OH oval, winning a total of 10 national level events in four different disciplines over the last four years. To his credit, he’s got five USAC Non-Wing Sprint Car scores, two USAC Midget victories, two USAC Silver Crown triumphs, and that one, huge World of Outlaws win.

Around the Turn: The final Crown Jewel of the season is coming up after this weekend for the World of Outlaws NOS Energy Drink Sprint Car Series. On October 1-2, The Greatest Show on Dirt will return to PA’s Williams Grove Speedway for the 59th National Open with a $75,000 payday on the line.

WHAT TO WATCH FOR: Penultimate Weekend Takes Outlaws to Lawton & Devil’s Bowl