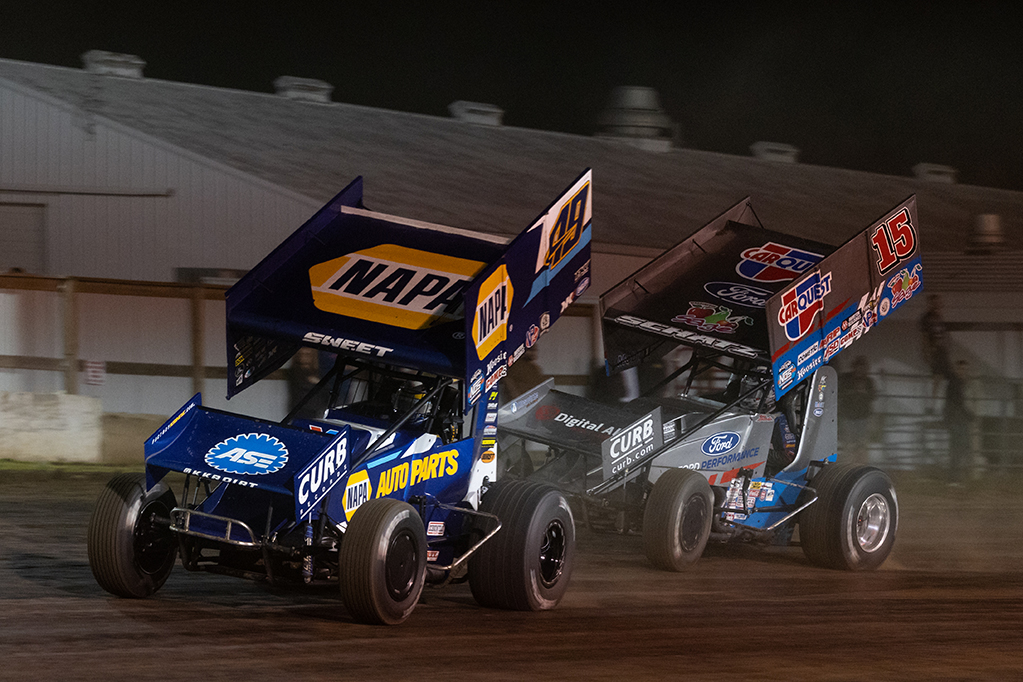 They sold full seats at Jacksonville Speedway on Thursday night, but the massive crowd only needed the edges of them.

The World of Outlaws NOS Energy Drink Sprint Car Series rolled into town for one night only and continued to offer The Greatest Show on Dirt. It was breathtaking, extraordinary, astounding, chaotic, and dramatic more than anything else.

The box score will only show two different official leaders, but in all reality the battle for the win was decided between six, count ’em SIX DRIVERS: Sheldon Haudenschild, Brad Sweet, Kyle Larson, Carson Macedo, David Gravel, and Donny Schatz.

In the end, it wasn’t the fittest, but actually the Sweetest who survived the mayhem to topple the $10,000 Feature at the 1/4-mile. Taking advantage of Haudenschild’s cut tire, Sweet inherited the lead then fended off a three-wide attack and a slide job on the final restart to secure his sixth win of the season aboard the Kasey Kahne Racing, NAPA Auto Parts #49.

The Grass Valley, CA native knows he wasn’t the best, but hey that’s short track racing as The Big Cat put it.

“That right there was short track racing as its finest, wow,” Sweet proclaimed. “I hope you fans know we can feel all of this energy. It’s so fun to be a World of Outlaws driver right now. That was action packed and I don’t think I was anywhere close to being the best car, but we survived with luck on our side. It’s such a tough 40 laps around this place.”

Questions mounted with heavy rains dousing the facility on Wednesday evening, but the staff at Jacksonville Speedway was more determined than ever to not let Mother Nature spoil the party.

Haudenschild’s momentum carried the NOS Energy Drink #17 to the outside pole of the 40-lap feature with Sweet starting inside of him after taking the DIRTVision Fast Pass Dash. The Wooster, OH native used the outside to his advantage and threaded the needle to lead the opening circuit. Haudenschild paced the opening eight laps before a restart allowed Sweet to slide in front of him and take command.

Sweet proceeded to lead the next 19 laps before Haudenschild roared back to the point with a daring move in heavy lap traffic. Just as the #17 pulled a diamond off turn two and slid the #49 for the top spot in turn three, the caution flew and set up the final double-file restart with 11 to go.

Lil Haud elected to take the top side and quickly drove away as he looked poised to score his third World of Outlaws win this season. However, a cut tire with only eight laps left soured his shot at the lead and sent him to the work area to change a right rear tire.

The ensuing restart gave Sweet the lead, but a mistake in turn one created a three-wide frenzy as he fought Carson Macedo and Kyle Larson for the top spot. The battle was short-lived as contact from Macedo and Larson sent the #57 spinning to a stop and removed him from contention.

From there, David Gravel entered the picture, but couldn’t make much of his run at Sweet. However, a caution on Lap 39 for Zach Hampton set fans up with a thrilling green-white-checkered as Donny Schatz lined up behind Sweet with the win on the line.

Schatz aced the middle of turns one and two then launched a turn three slide job as the duo raced back to the white flag. Sweet was quick to react and crossed under Schatz out of turn four to withhold the lead with one to go. Schatz had one last ditch effort coming to the checkered flag, but ultimately Sweet survived to win the thriller by 0.190-seconds.

“Hey, a win is a win it doesn’t matter how you get there,” Sweet said. “I about flipped, biked up, all but wrecked there at the end. A lot of things played out in my favor to get this win. You never want to see the yellow coming to the checkered I can tell you that. Luckily, I kept my tires underneath to me cross Donny back and held on to put one more lap together.”

For 10-time Series champion Donny Schatz, it was his second consecutive runner-up finish aboard the Tony Stewar/Curb-Agajanian Racing #15. After a tough three-week stretch, he admitted the team has recalibrated and their hard work is showing.

“You gotta crawl before you can walk, and you gotta walk before you can run,” Schatz noted. “My Carquest, Ford Performance guys are doing great. We’ve been getting better and that’s all you can ask for. We reset and went back to square one, so now we’re building ourselves back up again. Times change, people change, and we’re changing with it. I’m gonna keep doing what I’ve been doing for the past 25 years here.”

Rounding out the top five at Jacksonville was David Gravel (Big Game #2) with his career-best finish of third at the 1/4-mile, Carson Macedo (Jason Johnson #41) with a strong fourth-place finish, and Rico Abreu of St. Helena, CA with his best finish of the season in World of Outlaws competition.

Closing out the top ten on Thursday night was Jacob Allen with his first top-ten since February, Tim Kaeding with his best run yet aboard the Tony Stewart #14, Logan Schuchart after going tailback on Lap 29, Sheldon Haudenschild following his heartbreak on Lap 32, and Aaron Reutzel, who also recovered from the work area.

UP NEXT – The World of Outlaws NOS Energy Drink Sprint Car Series travels to Odessa, MO for its first appearance at the revamped I-70 Motorsports Park since 1986. The FVP Platinum Battery Showdown is a two-day affair at the 3/8-mile oval with complete programs scheduled for Friday, April 30 and Saturday, May 1.