THE BANK IS OPEN: $100,000/Win Huset’s High Bank Nationals Only Three Weeks Away 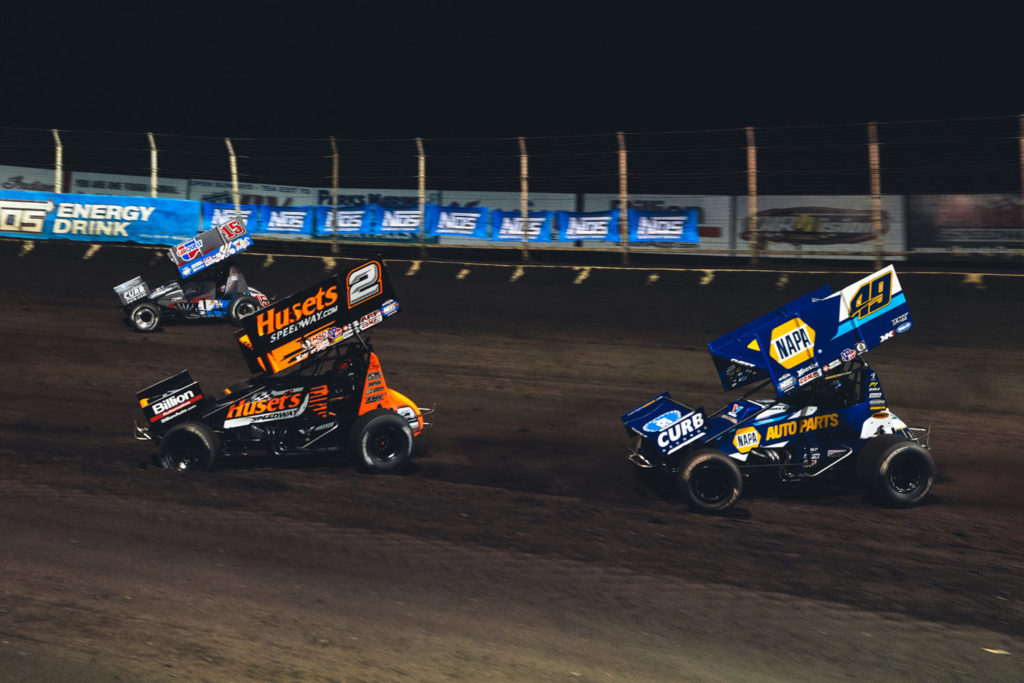 The World of Outlaws NOS Energy Drink Sprint Car Series will compete for four, six-figure paydays across the 2022 season, and the first one is only three weeks away.

A brand new event crafted by the always-innovative Tod Quiring, the inaugural High Bank Nationals will debut at Huset’s Speedway on Thursday-Saturday, June 23-25. Nearly a half-million dollars will be paid out over three nights at the Brandon, SD facility and it’s all capped off by a $100,000-to-win, $3,000-to-start main event.

The unique format for the three-day event is currently being finalized by track officials and will be released once completed.

Prior to the three-day spectacular, The Greatest Show on Dirt will tune-up for the race with a one-night stop at the 1/3-mile oval coming this Sunday, June 5. Weekly winners at the track this season already include Parker Price-Miller, Lynton Jeffrey, Giovanni Scelzi, and Ryan Timms.

Through 50 World of Outlaws NOS Energy Drink Sprint Car races at the track since 1983, a total of 19 different drivers have won with the Series at Huset’s. The trio of Sammy Swindell (10), Mark Kinser (9) & Steve Kinser (7) stand out above the rest, but when it comes to active drivers Donny Schatz (4) and David Gravel (2) lead the way. Others like Brad Sweet, Sheldon Haudenschild, and Aaron Reutzel have one win apiece.

Reutzel enters as the winner of last year’s Huset’s 50, a different two-day variation of this event with $30,000 on the line. That was in the Roth Motorsports #83 – now piloted by James McFadden – and now Reutzel wheels the Ridge & Sons Racing #8 in pursuit of another big payday in South Dakota.

For David Gravel, the Watertown, CT native is hoping to capitalize on recent success at Huset’s, the track owned by his car owner Tod Quiring and the name that dons his #2 Big Game Motorsports entry. He was twice a World of Outlaws winner at the track last year, and now looks to add the $100,000 High Banks Nationals to his list of Crown Jewel wins like the Knoxville Nationals, National Open, and Bristol Bash.

The most successful of all these drivers is the 10-time champion and 303-time winner, Donny Schatz. The Fargo native hails from North Dakota, but still owns the most active wins at the South Dakota oval with four triumphs and his last coming in 2016. The Tony Stewart/Curb-Agajanain Racing #15 has a knack for stepping up and shining during the biggest moments, and he’ll get his first chance this season in three weeks at Huset’s.

Defending Series champion and current championship leader Brad Sweet has always said his season centers around the Crown Jewel races, and that begins with the High Bank Nationals. The Kasey Kahne Racing, NAPA Auto Parts #49 won a 2016 event at the track, but to make the big bucks in three weeks, they’ll need to snap a winless spell that runs back to late March since The Big Cat’s first and only win of 2022.

Young guns Sheldon Haudenschild and Carson Macedo are the two winningest drivers with the World of Outlaws in 2022 ahead of the $100,000-to-win race. Haudenschild owns five wins in the Stenhouse Jr. / Marshall Racing #17, while Macedo is up to four wins with the Jason Johnson Racing #41. The duo has finished 1-2 before at Huset’s with Sheldon getting the edge over Carson in 2020.

Also in the mix is the Shark Racing duo of Logan Schuchart and Jacob Allen. The Hanover, PA team has put the #1A in victory lane twice already and the #1S is consistently on the podium these days battling for the championship lead. Both Jacob (3rd) and Logan (7th) set their Huset’s Speedway career-best finishes last year.

If you can’t attend the inaugural $100,000-to-win event in person, you can watch every lap LIVE on DIRTVision.