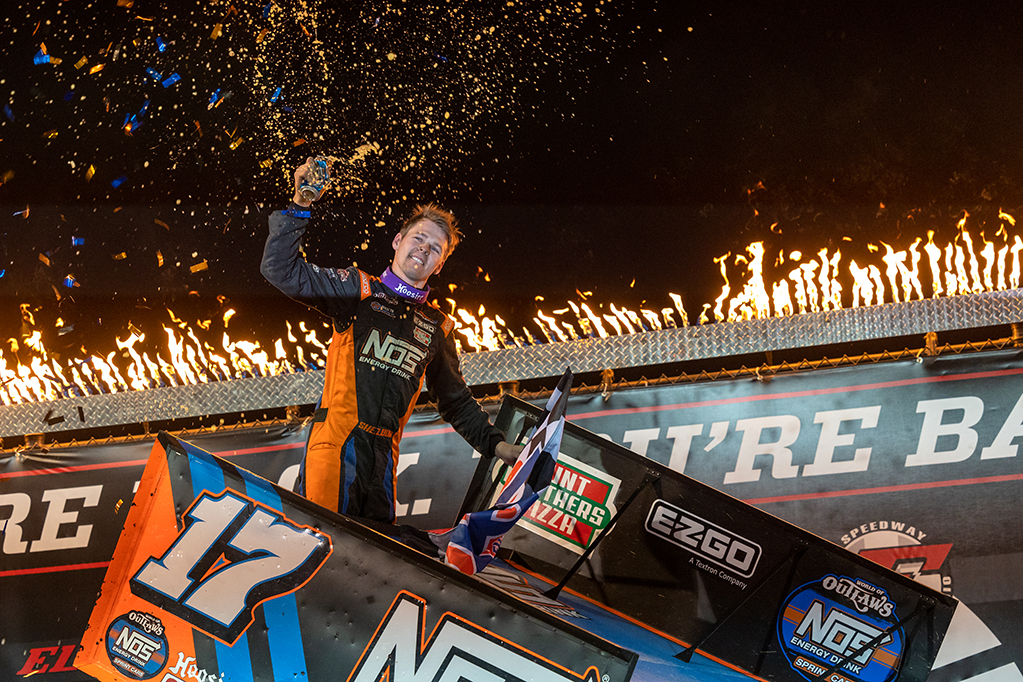 Saturday’s #LetsRaceTwo finale felt like the symbolical beginning of a new era in more ways than one.

For starters, Sheldon Haudenschild finally achieved one of his biggest personal goals: winning at Eldora Speedway. The 27-year-old gasser grew up only two hours away from the 1/2-mile in Wooster, OH sitting in the shadows behind his legendary father, Jac Haudenschild.

Jac’s legacy at The Big E is undeniably amongst the all-time greats. He won three Kings Royal’s, the Mopar Million, and countless other features in his heyday. Now, Sheldon is getting his chance to shine at The House That Earl Built. On Saturday, he did it while racing against his father in his farewell season aboard the Pennzoil #22, too.

On another level, Sheldon’s momentous breakthrough was special because it came against Donny Schatz. The 10-time World of Outlaws NOS Energy Drink Sprint Car Series champion is easily the greatest Eldora icon of his era, winning almost 20 times at the Rossburg, OH facility. Simply put, he’s the man to beat there.

Schatz and his Tony Stewart/Curb-Agajanian Racing crew were poised for a milestone victory until Sheldon spoiled their moment. Stalking Schatz over the final ten laps, Haudenschild slowly reeled in the Ford Performance, Carquest #15 before pouncing at the white flag and sending his NOS Energy Drink, Stenhouse Jr. Marshall Racing #17 to the lead.

He survived an extra 1/2-mile to score his 17th career World of Outlaws victory and the third of his 2021 season.

“Donny is the best in the business,” Haudenschild acknowledged on a man he grew up watching. “He schooled me early in the race, so I just fell into second and watched him for a bit. Sometimes it’s better to not be out front. I just kept telling myself to hit my marks and stay smooth. You have to be perfect at this place, and we finally did it tonight.”

From the outset, Haudenschild and Schatz were the two to watch in the #LetsRaceTwo finale.

Schatz somehow picked his way from seventh-to-second in the first two laps of the 30-lapper, but then Haudenschild blasted by he and leader Ian Madsen thanks to a monster slide job into turn one. The #17 paced the following four laps before Schatz perfected the low line and cruised into command on Lap 8.

A gnarly crash collecting top-five runners Giovanni Scelzi and Carson Macedo – all were okay – set the stage for the final restart on Lap 16. Electing to restart on the bottom, Schatz (Fargo, ND) quickly pulled away and seemed as if he was finally due to collect his first win of the 2021 season.

However, with 10 laps to go, you could feel the tide change. The momentum was swiftly changing, and it was changing away from Schatz’s #15.

With every passing lap, Haudenschild cut into the lead and withered it away until he was hounding Schatz with three to go. But the next time around, he was all over his back bumper. The next time? He was leading as the white flag waved and the #17 drove around the #15.

Haudenschild drove away to officially claim his first Eldora triumph by 0.930-seconds over Logan Schuchart, who stole second from Schatz on the final lap.

“As long as we can keep this team, these group of guys together for a long time, we could do something special,” Haudenschild said while realizing the magnitude of this moment. “If you look at the #15 [Schatz] or #49 [Sweet] over all these years, the crew is a huge part of their legacy. This win is at the top of my list, and it wouldn’t come without my guys [Kyle] Ripper, Nickolas [Goodfliesch] and Drew [Brenner]. I can’t wait for our big July shows here.”

Coming home with a second-place finish at Eldora was Logan Schuchart of Hanover, PA. He earned KSE Hard Charger honors with a jaw-dropping 21st-to-2nd (+19) bid aboard his Drydene Performance Products #1S.

“Man, we needed this run,” Schuchart said following his recent run of bad luck. “We’ve had a fast car all year, but those little problem have hurt us. Confidence is huge in this sport, and we just got a lot back tonight. I knew we had a good car, especially as the track came in. I’m so happy to be back here at Eldora. I love this place.”

Finishing a heartbreaking third was Schatz, who led 21 laps until Haudenschild went by at the white flag.

“He just had everything to gain by moving around the race track,” Schatz said on Haudenschild catching him. “We were solid out front, but kept fading there at the end. We were better in the middle and lower early on, but sometimes you get to see what’s going on if you’re bak there. I couldn’t move around, it’s just the way it goes. Would’ve been nice to win, but we didn’t. We’ll get another chance on Wednesday.”

Behind Haudenschild, Schuchart and Schatz was Ian Madsen in fourth after leading the first three laps aboard the McGhee #11, and Jacob Allen with his first top-five finish of the season aboard his Shark Racing, Drydene #1A.

UP NEXT – The World of Outlaws NOS Energy Drink Sprint Car Series prepare themselves for the first invasion of 2021 against the PA Posse. A three-race swing through Pennsylvania will bring The Greatest Show on Dirt to Lincoln Speedway on Wednesday, May 12 followed a doubleheader at Williams Grove Speedway on Friday-Saturday, May 14-15.