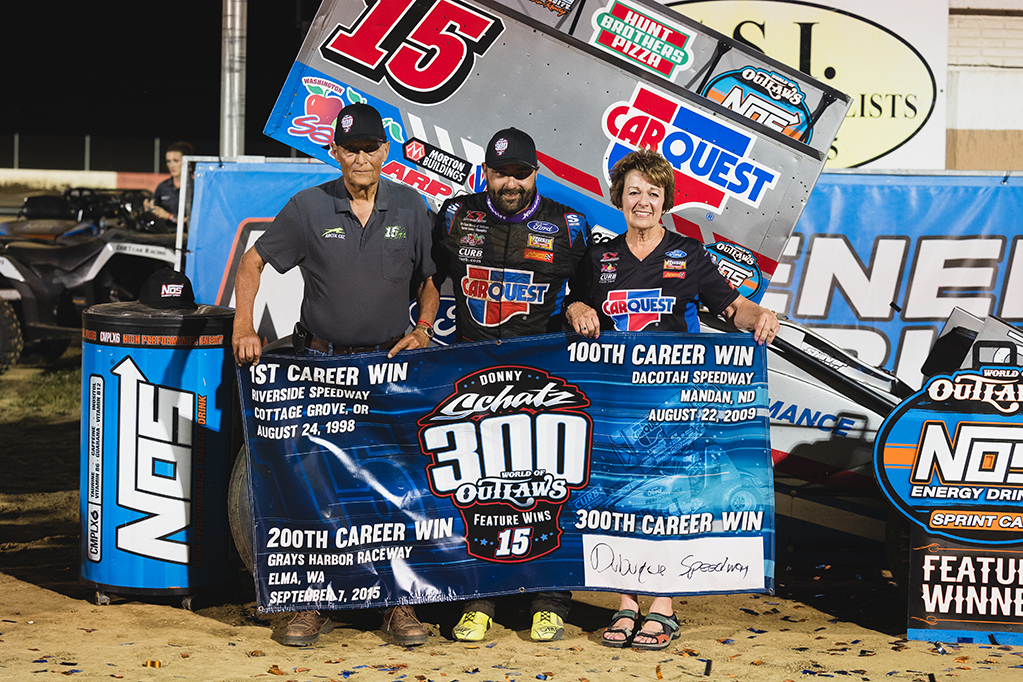 It’s not often that a 10-time World of Outlaws NOS Energy Drink Sprint Car Series champion gets choked up.

However, on Friday night at Dubuque Fairgrounds Speedway, Donny Schatz was, and rightfully so.

After a trying four-month stretch to open the 2021 season, a span that was perhaps more adversity-filled than any other throughout his iconic 25-year career, Schatz finally broke through into the win column with a historic blow.

The Tony Stewart/Curb-Agajanian Racing driver controlled the final 18 laps in Dubuque’s debut with The Greatest Show on Dirt, giving him his long-awaited milestone 300th career victory.

A 43-year-old native of Fargo, ND, Schatz admitted the victory was extra special with parents Danny and Diane in attendance to celebrate with him.

“It hasn’t sunk in,” an emotional Schatz told Dave Rieff in victory lane. “I thought this was gonna happen about 15 times already this year. That’s the way racing is, though. Sometimes the best things come to those who wait. It seems to be that way in life, and that way on the race track.”

“I’m really glad my father was here for this one,” Schatz said as he teared up. “He doesn’t get to go to all of them anymore, but he was here tonight.”

Proof of how trying this stretch was: Schatz’s first victory of the year came in the 32nd race – the longest he’s waited in two decades – and the win snapped a 38-race drought since his 299th victory at Williams Grove (PA) Speedway last October – his longest dry spell in two decades as well.

“I’m finally over the hump,” Schatz exclaimed. “We needed that win, we needed it anywhere. The first one is always the hardest. One year we wad to wait eight races until Las Vegas and that felt like eternity, but let me tell you 32 races is really eternity. It’s not from lack of effort, or lack of anything, it’s just the way things go..

From the outset on Friday, Schatz was feeling good. His Ford Performance, Carquest, Sage Fruit #15 never missed a beat on the track, either.

“There was something about the atmosphere here that made me feel like tonight was gonna be the night,” Schatz recalled. “It’s just a really awesome setting on the fairgrounds here. Something about this part of the country is unique to a kid that grew up in North Dakota.”

The night didn’t truly fall into Schatz’s grasp until Lap 12 of the Feature, when a wild turn of events sent both leader Aaron Reutzel and second-running David Gravel to the work area with flat tires. That handed the #15 command of the race, and he never relinquished control.

“I was playing cool back there and I could see Aaron setting a torrid pace around the top and then I saw how David cut his tire, so I went into conserve mode,” Schatz noted on his driving. “I got nervous during the red, because of tires sitting that long. I bounced into turn one on that restart, so I had to get my elbows up. I wasn’t letting this one get away, though.”

A caution on the white flag lap for top-five running Carson Macedo took the air out of the crowd before Schatz could cross the checkered flag. A green-white-checkered finish allowed James McFadden and Sheldon Haudenschild to take him three-wide for the win, but there was no stopping Donny on this night.

He blasted around the top and held on to take the win ahead of McFadden by 0.973-seconds. His monumental 300th career win puts him in elite company alongside Steve Kinser and Sammy Swindell, as the only three drivers in 40+ years of the World of Outlaws to ever achieve such a feat.

Closing out the podium behind Schatz was James McFadden aboard the Kasey Kahne Racing #9 and Kerry Madsen in the second Tony Stewart/Curb-Agajanian Racing #14 entry.

Finishing out the top-five on Friday night was Sheldon Haudenschild in fourth driving the NOS Energy Drink #17 and Logan Schuchart with a hard-charging 15th-to-fifth run for the Drydene Performance Products #1S.

Rounding out the top-10 at Dubuque was Brent Marks in sixth, Aaron Reutzel in seventh, David Gravel in eighth, Brad Sweet in ninth, and Giovanni Scelzi in tenth.

UP NEXT: The World of Outlaws NOS Energy Drink Sprint Car Series wraps up this weekend’s triple-header on Saturday, June 19 with a night at Wisconsin’s Beaver Dam Raceway. Next week, THE SHOWDOWN offers more than $600,000 in total purse money with the $30,000/Win Huset’s 50 on Monday-Tuesday, June 21-22 and the $50,000/Win Jackson Nationals on Thursday-Saturday, June 24-26.