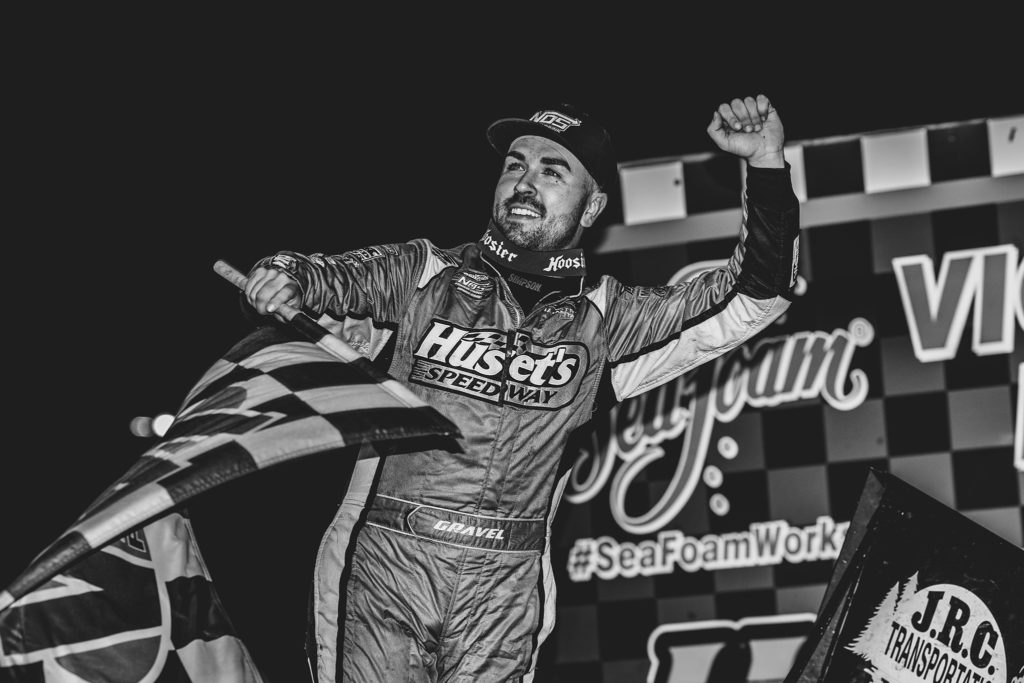 David Gravel has found a knack for shining bright when he plays in the boss’ backyard.

For the second time this season, the Watertown, CT native parked his Huset’s Speedway #2 in victory lane at none other than Huset’s Speedway, a track promoted by his Big Game Motorsports car owner – Tod Quiring.

His win ironically came just about 24 hours after the Watertown, CT native stated “they needed to get start getting some Outlaw wins” after running second at Red River Valley Speedway on Saturday night. He gave himself exactly what he wanted on Sunday, scoring his eighth win of the year and the 66th of his World of Outlaws NOS Energy Drink Sprint Car Series career.

Becoming the fourth different leader with 11 to go, Gravel said Sunday’s Pioneer Bin Buster Bash simply played into his favor. He’s not entirely wrong as Carson Macedo spun in lap traffic, Wayne Johnson slipped back from the pole, and Austin McCarl knocked the jacob’s ladder out of the car when he hit the wall.

However, a win is a win; and with 22 races remaining in the championship chase, every single point matters.

“That was a wild race,” Gravel said. “I thought I was going to wreck a couple of times. I just bided my time and the race really played out in my favor. I think the lead really just got handed to me. All in all, really happy to get another win at Huset’s Speedway. I mean this place was closed down four years ago and look at it now. It’s incredible seeing this kind of crowd.”

Beyond Gravel, the storylines were plentiful on Sunday as The Greatest Show on Dirt survived an afternoon thunderstorm and beat incoming weather to conclude an epic night of racing.

First off, Wayne Johnson of Oklahoma City, OK earned his first pole position in seven years with the World of Outlaws. The 50-year-old sophomore led 13 of the first 14 laps before slipping to finish seventh, which is still a season-best result for the Two-C Racing team.

Secondly, there was A-Mac Austin McCarl. The son of T-Mac Terry McCarl started outside pole at a track he has dominated in 2021, giving himself and his dad to become the eighth father-son duo to win in World of Outlaws history. The #17A led nine laps through the halfway point, but contact with the wall dropped him from the lead and eventually to a career-best P2 run.

There was also the run of Jacob Allen on this night. The lovable Shark Racing driver drove by the likes of Kraig Kinser and Donny Schatz to earn his first podium finish of the 2021 season.

Once in command of the lead on Lap 24, Gravel never looked back. He easily survived a restart with four to go, and then a green-white-checkered finish, as he ultimately crossed the line with a 1.425-second advantage.

“For how much we rain got, the track was really good,” Gravel noted. “Hats off to the Huset’s Speedway crew on the job they did, and the Outlaws did a great job rushing us through to beat the weather.”

After leading nine laps, Austin McCarl of Altoona, IA ended up with a second-place finish, equalling his career-best with the World of Outlaws NOS Energy Drink Sprint Car Series.

“You know you’re doing something right when you’re disappointed with running second at an Outlaw show,” McCarl mentioned. I just got too aggressive in traffic, made the car too tight and when I hit the fence it knocked the ladder out. It hurts, but I beat myself. I think I can live with that, rather than something else taking it away from us.”

Claiming the final podium position was Hanover, PA’s Jacob Allen with his first top-three result of the year in his Shark Racing, Drydene Performance Products #1S.

“This feels great, man,” Allen said. “Huset’s is so much fun when it’s like this. Getting back on the podium with the Outlaws is awesome.”

Closing out the top-five at Huset’s was a red-hot Donny Schatz in fourth aboard the Tony Stewart/Curb-Agajanian Racing #15 and Kraig Kinser in fifth aboard the #11K with his third top-five finish of the season.

Rounding out the top-10 on Sunday night was James McFadden in sixth, Wayne Johnson with a season-best seventh, championship leader Brad Sweet in eighth, Sheldon Haudenschild in ninth, and Brock Zearfoss with his 15th top-10 of the year.

UP NEXT: The World of Outlaws NOS Energy Drink Sprint Car Series will take two days off before returning to North Dakota this Wednesday, August 25 for a makeup date at Grand Forks’ River Cities Speedway. After that, The Greatest Show on Dirt will head to Nebraska’s I-80 Speedway on Friday, August 27, and South Dakota’s Black Hills Speedway on Saturday, August 29.