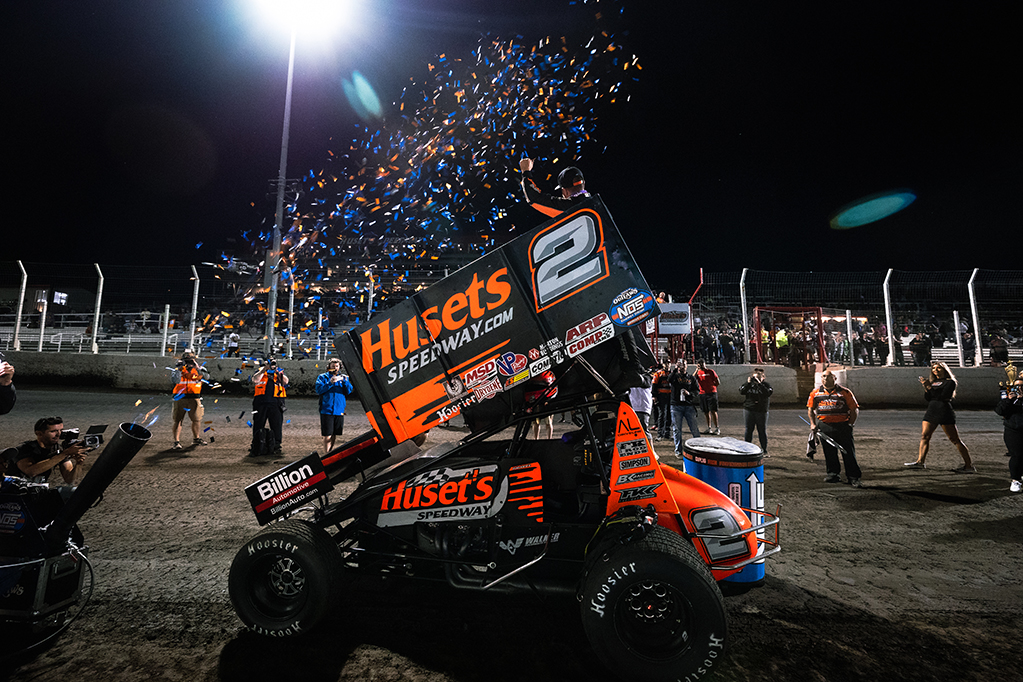 Tod Quiring’s resurrection of Huset’s Speedway is nothing to be overlooked; nor is the season his driver David Gravel and team Big Game Motorsports are piecing together.

On Monday night, both of his worlds collided in the best sense possible.

Leading the final 26 laps at the Brandon, SD oval, Gravel survived a final charge from Donny Schatz to score night one of THE SHOWDOWN, a weeklong extravaganza promoted by Quiring.

It was win #6 on the season for Gravel, who parked the #2 in victory lane with Huset’s Speedway branding all over his bright bullet. The momentum building run sends the Watertown, CT native into tomorrow’s Huset’s 50 finale with his sights set on a cool $30,000 payday – the highest purse to date in 2021 for the World of Outlaws NOS Energy Drink Sprint Car Series.

More than that, they’re chasing the mammoth $100,000 bonus available if they can sweep Tuesday’s finale at Huset’s and then Saturday’s 43rd annual AGCO Jackson Nationals.

“We’ve been really strong lately,” Gravel noted. “Luckily, I got Donny back there in the beginning. I went to the top at the start knowing it was the faster lane, but he just snookered me on that first lap. I tried hard to get by him, but it turned out to be better running second with lap traffic here. That’s what won us the race.”

After winning his Drydene Heat Race and topping the DIRTVision Fast Pass Dash, Gravel was in prime position from the start of Monday’s 35-lap NOS Energy Drink Feature.

However, Lap 1 belonged to 10-time Series champion Donny Schatz. The 300-time World of Outlaws winner throttled by Gravel from the jump and ran off into lap traffic with command.

The #15 paced the opening nine laps before the decisiveness of traffic bit him when an error in judgment slowed him on the bottom and allowed Gravel to fly by on the outside. The only caution of the race flew on Lap 11 for sixth-running Aaron Reutzel’s shredded right rear tire.

Gravel ran away with the lead on the restart and was checking out before Schatz re-entered the picture in the closing stages. He got so close on Lap 31 that he snook to the inside of Gravel’s #2 in turn one, but didn’t have enough to make the move.

Schatz tried to force Gravel’s hand on the final lap, but he played it cool and survived to win his 64th career World of Outlaws Feature.

“I was watching Donny on the DIRTVision screen there and saw him right on me,” Gravel admitted. “He’s one of the best rubber racers out here, I just knew I had to run it a little harder into turn three and I’d be fine. I conserved my tire quite a bit early on.”

Coming home with a close second-place finish was Donny Schatz, who earned his 300th career World of Outlaws win last week. The 10-time Series champion was close to win #301, but his late-race charge fell short by only 0.297-seconds in the Tony Stewart/Curb-Agajanian Racing, Ford Performance, Carquest #15.

“I just didn’t go in the right spot, I really misjudged that lapper,” Schatz said. “We had something for him there at the end, so that’s a positive. I was trying to force him into making a mistake, that’s about all I could do.”

“What a fun car to drive,” Madsen raved. “Everyone at TSR does such a phenomenal drive. These Ford Performance engines suit me so much.”

Rounding out the top-five on Monday night was a pair of brother-in-laws In fourth, it was championship leader Brad Sweet aboard the Kasey Kahne Racing, NAPA Auto Parts #49. In fifth, it was NASCAR superstar Kyle Larson driving Paul Silva’s #57.

Closing out the top-10 at Huset’s was NOS Energy Drink stud Sheldon Haudenschild in sixth, Shark Racing teammates Jacob Allen and Logan Schuchart in seventh and eighth, local South Dakota native Justin Henderson in tenth, and Kraig Kinser with his first top-1o since May.

UP NEXT: THE SHOWDOWN continues tomorrow Tuesday, June 22 with the finale of the Huset’s 50 offering a $30,000 payday. The winner will have a chance to cash in for a $100,000 bonus if they also win Saturday’s $50,000 finale to the AGCO Jackson Nationals.