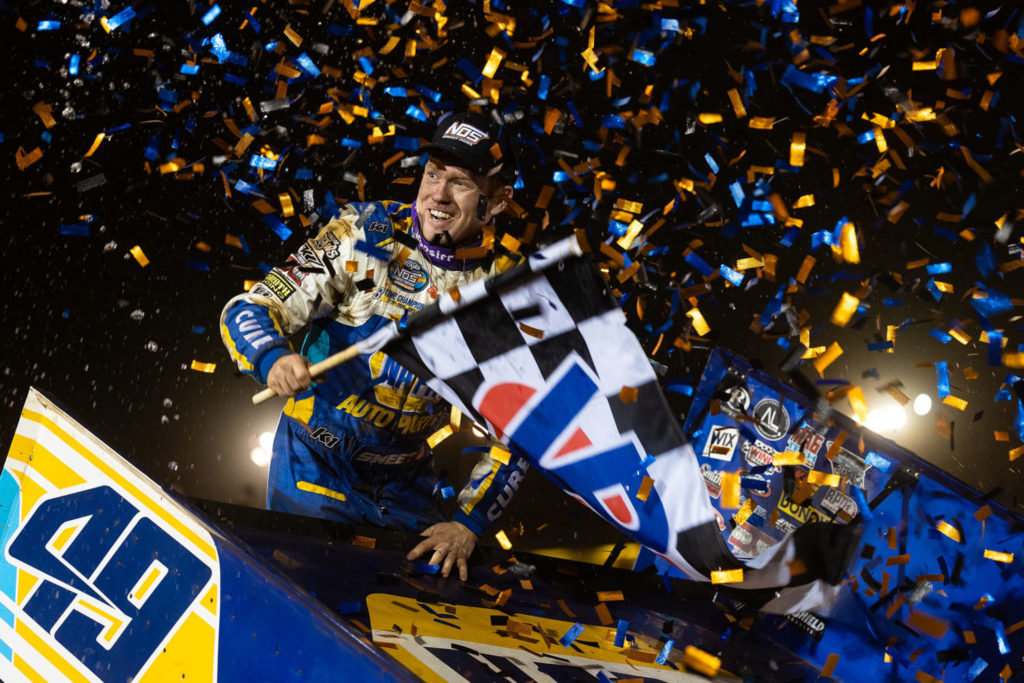 Brad Sweet proved there is a first for everything on Saturday night at Williams Grove Speedway.

In his 53rd start at the Mechanicsburg, PA 1/2-mile, the Grass Valley, CA native finally tamed the track that had long eluded him since he first debuted there in 2009. Leading the final three laps of the Summer Nationals, Sweet scored a $20,000 payday and flashed his biggest smile of the season in World of Outlaws NOS Energy Drink Sprint Car Series Victory Lane.

“This has been a long time coming,” an exuberant Sweet said. “Winning here is such a relief. Nobody can say that I didn’t conquer this place, and damn it was a great race. It was technical, racey, and wide, and I had to earn that one. We’re going to celebrate this one pretty good tonight.”

To finally overcome the unique challenges they faced at Williams Grove, Sweet’s Kasey Kahne Racing team built a one-off car for the NAPA Auto Parts #49 and relied on a notebook they had been committed to building for several seasons. It paid off in a big way as he finished fourth on Friday and followed that with a Saturday triumph to extend his championship lead.

“You have to have a great car under you,” Sweet expanded on his progress. “My driving habits don’t work at this place, we had to build a completely different car to come to this track. It’s going into the rafters and it won’t come back out until the National Open. I can tell you it takes a lot of hard work to beat guys like Lance [Dewease], Danny [Dietrich], Brent [Marks], Anthony [Macri], and all the locals here. We’ve been working on this Williams Grove setup for a long, long time.”

In becoming the 304th driver to win a Sprint Car race at Williams Grove, Sweet also snapped a 31-race dry spell with The Greatest Show on Dirt. Saturday marked his first win with the Series since March 30 at Vado (NM) and revitalized a man, who albeit leads the points in pursuit of a fourth-straight championship, has felt down and out at times in 2022.

“It’s been a tough season and there have honestly been many times where I’ve wanted to quit,” Sweet admitted on his trying campaign. “You know it’s been a weird year when we’re at the Summer Nationals with my second win and it’s Williams Grove of all places. I feel so bad for this team at times. They work so hard and became used to getting results, but we’ve faced a ton of adversity this year. It’s nice to feel that winning emotion again and give them what they deserve.”

Striking while the iron was hot, Sweet capitalized on the only restart of the race on Lap 18 following Carson Macedo’s flip which collected Kyle Larson and Anthony Macri. The Big Cat lined up third behind Sheldon Haudenschild and Donny Schatz, and quickly guided his mount to the front of the field.

He drove by Schatz down the backstretch on Lap 23 and immediately began taking chunks out of Haudenschild’s advantage. On Lap 28, he snuck by the young phenom and took control of the lead as the two-to-go signal flashed. He still had to withstand one final attack from a hard-charging Danny Dietrich to secure the deal on his first win at the PA Posse’s home venue.

Falling short by 0.339-seconds with a valiant late-race bid was Danny Dietrich of Gettysburg, PA, leading the charge for the Posse. The Gary Kauffman Racing #48 nearly snuck by Sweet coming to the white flag but didn’t have enough momentum to make the pass stick. Their second runner-up finish of the week with the World of Outlaws paid out to the tune of $12,000 on Saturday.

“I’m thrilled with a second, especially two on the week against these guys,” Dietrich noted. “I was just waiting for the track to come to me and not use up my tires. We hit about five to go and I decided to trunk the win, let it eat, and get going, but I just ran out of time. It’s hard to say it would’ve played out, but Brad was really good. When this place gets super slick like that it gets really fun.”

After leading 21 laps, Sheldon Haudenschild settled for a third-place finish, marking another heartbreaking loss at the Summer Nationals. It was a strong rebound for the Stenhouse Jr. / Marshall Racing, NOS Energy Drink #17 team, who had slipped to a 12.0 average over their last seven shows. The Wooster, OH native will undoubtedly be a contender for the $75,000 National Open title when he leads the Series back to Williams Grove in October.

“I had my wing back too far and had to slow down too much, so I started losing speed,” Sheldon spoke on his late-race trouble. “I was cheating my entry into turn three and should’ve stayed committed to what I was doing. I gotta say hats off to my guys, though. It’s been a rough couple of weeks, but they’ve been grinding every single day to get us back to where we need to be. We’ll keep working to get back into Victory Lane.”

Rounding out the top-five at Williams Grove was Donny Schatz making his 2,00th career start, and Freddie Rahmer finished fifth to reclaim the points lead for the track title. Closing out the top-10 on Saturday were James McFadden, David Gravel, Spencer Bayston, Jacob Allen, and Brock Zearfoss with KSE Hard Charger honors for a 22nd-to-12th bid.

Brad Sweet’s 76th career World of Outlaws NOS Energy Drink Sprint Car Series victory brings him eight away from tying Stevie Smith of New Oxford, PA for 10th on the All-Time Win List at 84 triumphs. His second win of the 2022 season snaps a 31-race drought since March 30 at Vado (NM) and makes him the ninth multi-time winner with the Series this season.

Anthony Macri started the night off right for the PA Posse with his first QuickTime Award of the season coming in My Place Hotels Qualifying. The Concrete Kid circled Williams Grove in 17.288 seconds to outrun James McFadden by a mere five, one-thousandths.

Following a conflict during Friday’s Heat Races, Fred and Freddie Rahmer were both fined for entering another competitor’s race car and initiating a physical altercation, and Danny Dietrich was also fined for purposely driving into another car on the track. Both PA Posse stars returned on Saturday and each recorded a season-best result against the World of Outlaws.

UP NEXT (Sat-Sun) – The World of Outlaws NOS Energy Drink Sprint Car Series prepares to make its only stop in The Empire State next weekend with a New York’s Weedsport Speedway hosting shows on Saturday and Sunday, July 30-31. Fans can BUY TICKETS HERE, or watch every lap LIVE on DIRTVision.