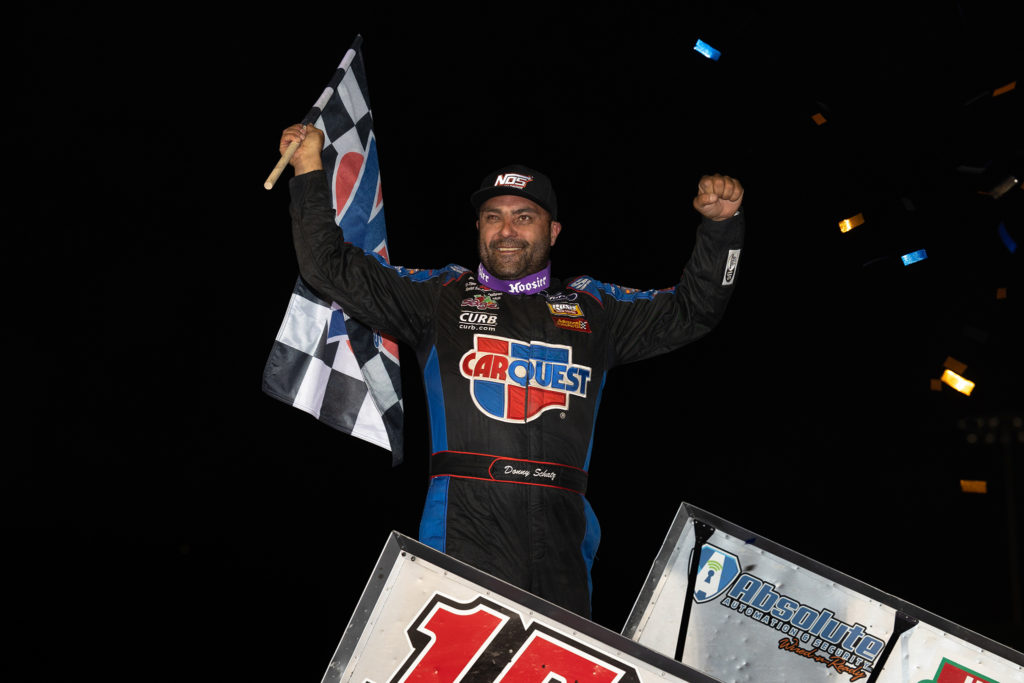 Fargo fans got exactly what they wanted on Saturday night: a Donny Schatz W.

After taking the lead from Logan Schuchart with eight to go at Red River Valley Speedway, the 10-time World of Outlaws NOS Energy Drink Sprint Car Series champion survived the final restart and ran away with his second victory of the 2021 season.

As emotional that he was for his 300th career win, Schatz was equally as excited for his 301st.

He offered a huge fist pump in victory lane and couldn’t thank the fans enough for their support. The roars of the packed crowd echoed through Cass County and random shoutings such as “WE LOVE YOU DONNY” and “YOU’RE THE GOAT” could be heard over the podium interviews.

Schatz has now won 23 of his 301 career wins with The Greatest Show on Dirt inside his home state of North Dakota. Six of those 23 triumphs in the “Peace Garden State” have come specifically at Red River Valley, located just minutes away from his Fargo residence.

Saturday’s win came in the first race back since he nearly stole his 11th Knoxville Nationals title last weekend. With a new Ford Performance (FPS410) Engine under the hood and newfound confidence, Schatz says he’s looking forward to these final 23 races in the 2021 season.

“Winning at home is big, and it’s important,” Schatz said to a raucous crowd. “I mean, look at this crowd. You guys are incredible. It’s cliche, but I can’t thank you guys enough for the support, it means a lot to me. I’m 25 years into this deal, and I’m feeling better every day. I don’t know that I have another 25, but I know that I’ve still got a lot left in me.”

Before Schatz thrilled his hometown crowd, Kasey Kahne sent the internet into a frenzy during Slick Woody’s Qualifying. In his first race as a “full-time” Outlaw, Kahne established a NEW TRACK RECORD (11.397 seconds) and made it four consecutive QuickTimes for the Roth Motorsports #83.

Gravel paced the opening lap of the Feature in his Big Game Motorsports #2, but in choosing the outside lane on the first restart, he chose poorly. Schuchart scooted by with a slide job into turn one and Gravel eventually succumbed to Schatz on Lap 11 as he faded to third.

As the cross flags waved with 15 down and 15 to go, Schatz picked up the pace and quickly caught Schuchart in a battle for the lead. Fans were treated to a thrilling show through lap traffic as the #15 and the #1S dueled for a handful of laps, even going three-wide with the backmarkers.

Schatz officially took command on Lap 22, moments prior to the final caution being called for Marcus Dumesny on Lap 24. He aced the final restart and went challenge free to the checkered flag ahead by 2.636-seconds as his Tony Stewart/Curb-Agajanian Racing, Carquest #15 made it two wins in 2021.

“We haven’t had the greatest year, but we’re past 300, we’re onto the 301, and now we want 302,” Schatz mentioned. “We’re hitting on all cylinders right now. This is a new Ford powerplant under the hood. Things have been way better with this. It’s a lot easier for me to drive, and we can do the things that we couldn’t earlier this year. Hats off to Ford Performance, and every single one of our partners for sticking with us. We’ve lacked speed at the end of the races, and these past few weeks there’s been a huge difference. I’m feeling really good going forward.”

While Schatz walked away with the win, mayhem broke loose in the battle for second as a three-way war ensued.

Ultimately, David Gravel ended the night with a runner-up finish. The Big Game Motorsports #2 didn’t get the W they wanted, but they’ll now head to Huset’s Speedway on Sunday with the championship runner-up slot back in their grasp.

“I feel bad for my guys,” Gravel acknowledged. “I chose the top and gave up the lead, and I think that is what took us out of contention for the win. If I didn’t make that big move at the end, I think we’d run fourth tonight. Starting on the pole, you always want to win so it’s a bit disappointing. It’s been a good year, but we need to start picking up some more wins.”

Rounding out the podium for the seventh time this year was James McFadden aboard the Kasey Kahne Racing, Karavan Trailers #9. He sealed his deal for a top-three in the midst of a wild three-wide move with Gravel and Schuchart on the Lap 24 restart.

“That was a lot of fun, mate,” McFadden offered. “It was treacherous up top. A real fine line between ripping or falling off. This place reminds me of home. It’s always fun when you run better and we’ve been doing that lately.”

UP NEXT: The World of Outlaws NOS Energy Drink Sprint Car Series wraps up the weekend tomorrow, Sunday, August 22 at Huset’s Speedway. The Pioneer Bin Buster Bash marks the 50th all-time appearance by The Greatest Show on Dirt in Brandon, SD. Tickets are available to BUY HERE.