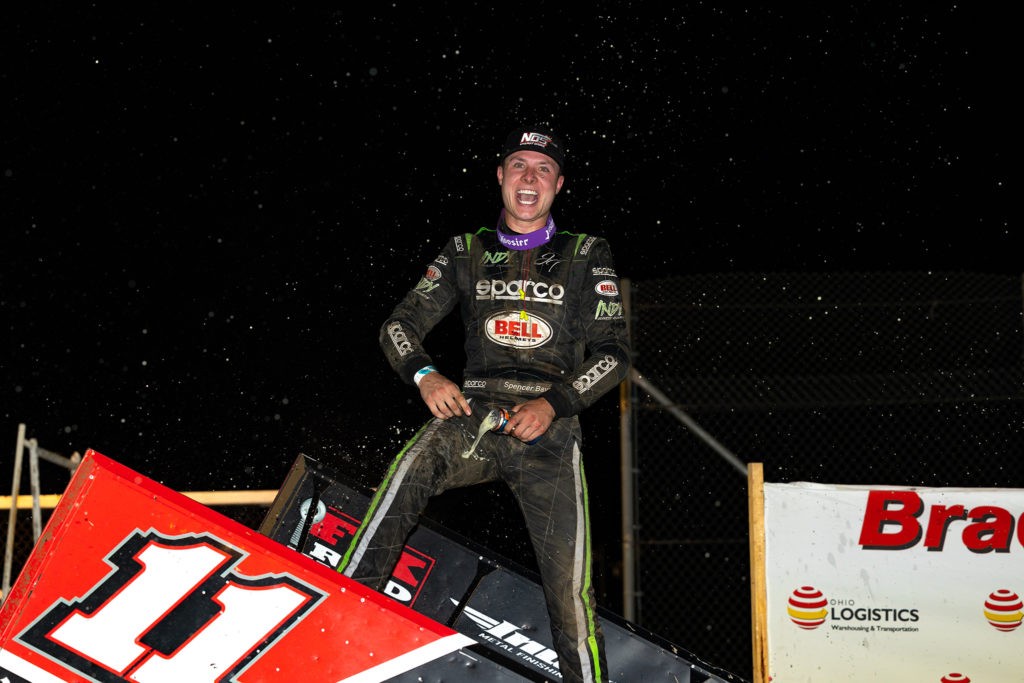 On Tuesday night, though, the 22-year-old Lebanon, IN native did just that at Attica Raceway Park. Leading the final 33 laps, Bayston kept himself calm, cool and collected with Brad Sweet breathing down his neck, and survived several restarts to score his first-career World of Outlaws NOS Energy Drink Sprint Car win in his 44th Series start.

The $10,000 payday was extra special being at the 33rd annual Brad Doty Classic with the legend in attendance to present Bayston with his hardware. He also delivered the first World of Outlaws win for young car owner Sam McGhee of Indianapolis, IN.

Bayston’s breakthrough came with the ultimate task: beating Brad Sweet heads up. The two-time and defending champion has made a habit of stealing wins late in the running, and the pressure was on when the #49 restarted alongside, and then behind Bayston’s #11.

Sweet threw several challenges at the up-and-coming star, but Bayston never wavered in clutch time. Following the final restart with 10 to go, Bayston cruised away to a 2.174-second margin of victory.

He climbed out to the roars of a packed crowd, stood atop the wing, and let his jubilant screams echo throughout the fairgrounds.

“This is something every kid dreams of when they grow up watching the World of Outlaws,” Bayston admitted. “You know I when I was a kid I thought these guys were like the NFL, the NBA, the best in the dirt world. I wanted to go out and compete against them, let alone actually beat them. It’s hard to describe. Wow.”

Becoming the third and final leader in Tuesday’s 40-lap affair, Bayston executed a pitch-perfect restart on Lap 8 and successfully came out ahead of Logan Schuchart and Cory Eliason in a three-wide move out of turn two.

Capitalizing on every turning point of the race, Bayston’s bid for the lead came following contact between Schuchart and Tyler Courtney. The duo had gone back and forth while exchanging the lead in the first five laps, but they hit on Lap 5 and the result sent Courtney’s NOS Energy Drink TURBO #7BC spinning to a stop.

Ironically enough, Courtney falling wayside in pursuit of his first-career win is what helped open the door for Bayston to get his.

Once into command, Bayston initially checked out and built a sizable gap as he raced into lap traffic while Sweet dueled with Schuchart for second. The first of two restarts came on Lap 27 when fourth-running  Eliason spun to a stop and erased Bayston’s advantage.

He survived Sweet’s first attempt at the top spot, but the caution would fly again on Lap 30. However, being with 10 to go, the rules called for a single-file restart with Sweet stuck to the tail of Bayston. He gave it another shot entering turn one, but fell short and Bayston rode off into a sunset filled with glory.

“I was thinking about how many times I’ve watched DIRTVision and Brad stole the win on a late-race restart,” Bayston joked. “I tried to get in the zone as much as possible and just hit my marks. I knew that if I could get to the exit of turn two clean then I would be good. I knew that would win me the race. I was looking at the board every lap just counting down the laps and trying to remember to breath.”

The magnitude of the win wasn’t lost on the young man throughout post-race celebrations. He’s now the 146th driver in history to win a World of Outlaws race.

More importantly, its proof that his brand new relationship with Sam McGhee Motorsports is firing on all cylinders.

“I don’t know where to start with these guys,” Bayston said. “To come here with a team that I think we’ve ran 13 races together and do this is unbelievable. We’ve got a badass crew chief that’s younger me (Sam McGhee, 21) and we are all so fresh as a unit. We almost won an All-Star race our second night, then we won Sharon last week, and now we’ve got an Outlaw win.”

On a personally significant level, it’s fitting that Bayston’s first-career World of Outlaws victory comes at the same place where he won his first-ever 410 Sprint Car race in 2017 – Attica Raceway Park.

Following Bayston to the stripe and finishing on the podium at the Brad Doty Classic was Brad Sweet aboard the Kasey Kahne Racing #49 in second and Carson Macedo aboard the Jason Johnson Racing #41 in third,

Closing out the top-10 on Tuesday was the Kasey Kahne Racing #9 of James McFadden, the Clauson-Marshall Racing #7BC of Tyler Courtney, the Stenhouse Jr. Marshall Racing #17 of Sheldon Haudenschild, the Lane Racing #4 of Cap Henry, and the Big Game Motorsports #2 of David Gravel.

UP NEXT: The World of Outlaws NOS Energy Drink Sprint Car Series will convey to Eldora Speedway for a historic double Kings Royal. The Greatest Show on Dirt races Wednesday-Saturday at The Big E with $175,000 paydays available on Thursday and Saturday night. All of the action can be seen LIVE on DIRTVision.