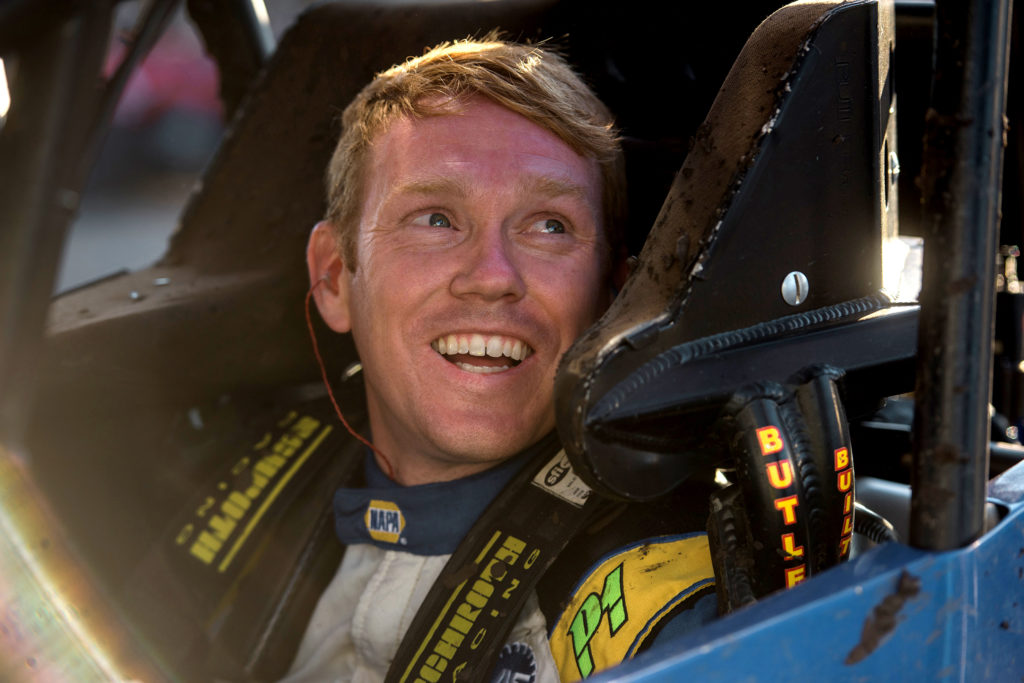 Never get caught staring at the standings. You hear it after two months of a six-month baseball campaign or Week Five of a 17-game football season. The message is clear: just do your job, play hard, and let the chips fall wherever they may. Do not waste concern on rival teams. Strengthen your own program. But after 70 of 75 races and thousands of dollars in point money at stake, everyone in the World of Outlaws has stolen a glance at those soon-to-be-World-Final standings.

Brad Sweet, the pride of Grass Valley, CA, is almost a hundred points ahead of New England’s David Gravel in the stretch run to his third straight ring and fourth by player/manager Kasey Kahne. The circle is tight: only 10 champs in 43 years. In its infancy, the head table was all but reserved for Steve Kinser, king for 20 seasons. Donny Schatz owns half as many. Sammy Swindell totaled three. Mark Kinser and Jason Meyers repeated while Bobby Davis Jr. (’89), Dave Blaney (’95), Danny Lasoski (’01) and Daryn Pittman (’13) completed the suite.

Surfers to this site can recite Outlaw champions. But what of those in their wake? Who were those drivers who dragged families back and forth across America for entire 100-race grinds? How did they fare? What were their high points? If it is true that fans seldom remember who ran second in any particular race, they are certainly hazy about who was seventh in the standings of 1981. So allow me.

Only four kings have beaten the World of Outlaws more times than the 140 wins stacked by Doug Wolfgang, though Wolfie was never champ. Four times with four teams Doug amassed the second-most points: 1980 with Bob Trostle, 1981 for Doug Howells, 1983 with C.K Spurlock, and 1990 for Ray and Jay Williams of San Jose, CA. Minnesota’s Craig Dollansky was runner-up in 2006 and ’12. Rick Ferkel took the original 1978 fight to the final round. Brad Doty’s career year of 1987 was also Kinser’s greatest. Ray and Jay were second with Jeff Swindell in 1989. Stevie Smith and Al Hamilton scored second in 1992. Jac Haudenschild and Jack Elden peaked second in 1995. Autumn injuries denied Kahne and Joey Saldana in 2007. Kyle Larson and Justin Marks were next-best with Shane Stewart in 2015. And last year, Logan Schuchart placed grandpa Bobby Allen in his first Outlaw title fight.

Gravel has a ghost of a chance at 2021’s top prize, but Connecticut’s contribution to “The Greatest Show On Dirt” is a solid bet to close one click better than his third-place checks from four of the last five seasons. Third was highest for Joe Gaerte, Paul McMahan and Ron Shuman, though all three did it twice. Third-place in points was best for Bobby Allen (’78), California’s Lee James (’80), Shane Carson (’82), Maryland’s Cris Eash (’89) and Oklahoma’s Andy Hillenburg in 1994.

Across the big river from the Stenhouse shop is the suburban Memphis headquarters of Jason Sides, fifth in the final standings of 2009-10. Fifth was also the finest series result for USAC champion Jack Hewitt (’78), Pittsburgh’s Tim Shaffer (’02) and Kraig Kinser during his Knoxville Nationals-winning season of 2005. Last year, Carson Macedo from Fresno finished fifth. This year, he occupies third-place.

New Mexico’s Johnny Herrera hit sixth-place in points for Utah’s Red Powell in 1991 and again in 1996 with Iowa’s Gil Sonner. Spurlock of Nashville was sixth with Kentucky’s Charlie Swartz (’78), El Paso’s Dub May (’79) and Danny Smith in 1981. Native New Yorker Lee Osborne owned, built and drove cars to sixth in the standings of 1980. Australia’s Brooke Tatnell totaled the sixth-most points of 2006. Sixth was also the final 2017 rest of Jason Johnson, fastest racer ever out of Louisiana.

Eighth-place in points was an Outlaw peak for Port Royal legend Keith Kauffman in 1988-89 and Kerry’s kid brother Ian Madsen in 2018-19. Eighth was highest for British Columbia’s Jim Carr (’91), San Jose racers Randy Hannagan (’95) and Brad Furr (’02), Mechanicsburg High School’s Brian Paulus (’03), Justin Henderson (’06) and Terry McCarl in 2008. Eighth was where Jacob Allen ended 2020 and where Outlaw rookie Brock Zearfoss stands in 2021. Best for Brent Marks was ninth in 2018 after Rocky Hodges got there with Arizona’s Gil Suiter in 1985. Last year’s ninth-place by Parker Price Miller marked his series high.

During the day-to-day course of any given season, most drivers are laser-focused on that next race. But when the next race is three months off in the distance, point funds become very important. This wagon train of 2021 will only stop in four more towns: Kansas City, Lawton, Dallas and Charlotte. Teams have four more places to score a touchdown or swat a home run. Sweet has one hand on another Stanley Cup.