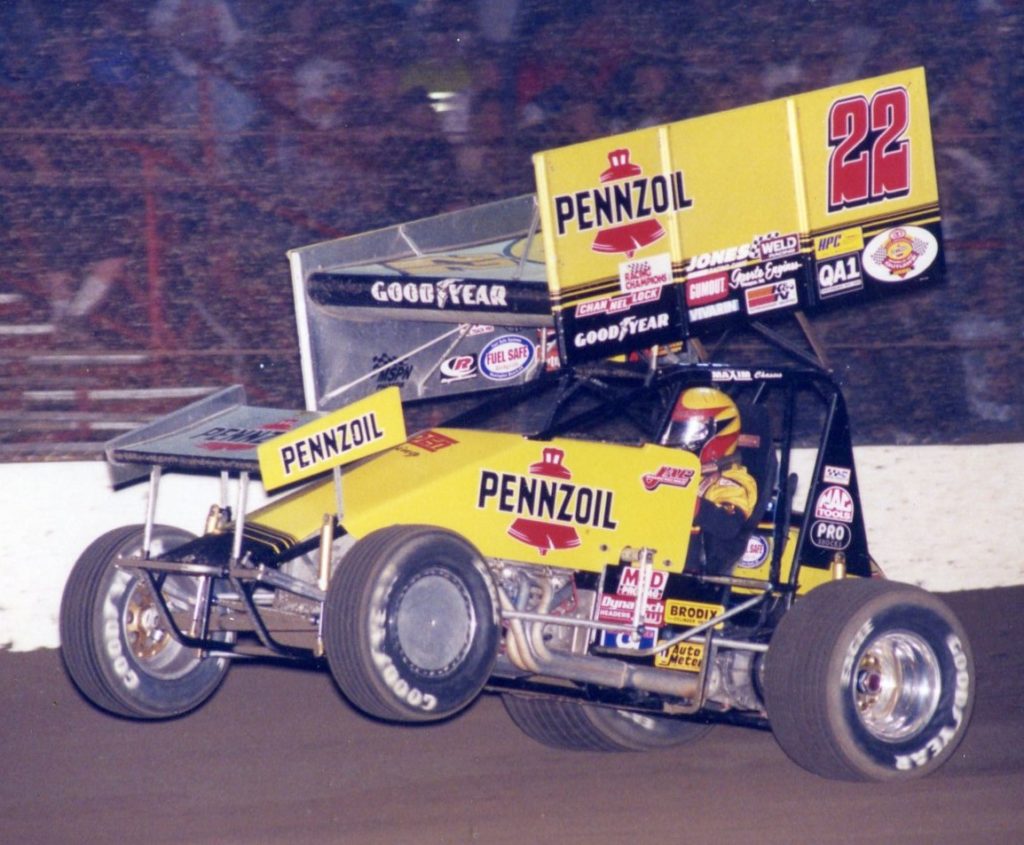 He was the most fearless driver in World of Outlaws history. Holmes County, Ohio’s Jac Haudenschild hammered that fact from the Eldora Nationals of 1978 to the World Finals of 2021. He was “The Wild Child” who married his wild West Coast counterpart and fathered wild children, one of whom just might exceed dad’s 72 series victories. Many of Jac’s most memorable runs netted no wins because even when buried ninth or 10th, Haud had an unmatched ability to amaze. Bravery backed Jac into impossibly tight windows that only talent and reflexes did escape. On other nights, he might throw away a large lead by driving off the track. Either way, everyone was wise to keep an eye on the boy.

He was every bit as brave without wings as he was with them, a trait that made him utterly unique. He whipped the California Racing Association at Ascot Park with a stunning fourth-to-first lunge on the final lap aboard a Los Gatos Auto Body Special he had never seen. He dusted the United States Auto Club by clinging to Eldora concrete. When 150 cars without wings converged, 200 Grand was his. He beat the All Star Circuit of Champions on 21 occasions. He won three Gold Cups, two Kings Royals, and one Grand Annual Classic in Australia. Space for this mini-bio dictates focusing on Jac’s chaotic course through “The Greatest Show On Dirt.”

Eleven men own more wins with the World of Outlaws than Jac Haudenschild, but none did so for more car owners: 14. Jac cracked Outlaw A-mains with a phenomenal 55 teams. Early on, he seemed incapable of keeping a job yet never looked worried. Back in the roaring ’80s there was always another phone number up his sleeve. And he never burned a bridge, returning to the same rides again and again. “How can you stay mad at Haud?” asked Daryl Saucier after Jac destroyed Daryl’s brand new Nance in an Ascot heat race. That wreck at the 1986 Outlaw finale capped the first time Jac stayed with one team for nine months. A year later, he convinced lifelong pal Brad Doty to quit Les Kepler and then took the gig himself. “I was mad about that for a while,” Doty admitted in his autobiography.

Only a few Amish farmers between Lakeville and Lima knew about Doty, Kenny Jacobs, Ed Haudenschild or baby brother Jac before 1978. Fewer still could pronounce the name. Dropping the ‘k’ caused some announcers to think it short for “Jacques” as if from Quebec. Jac’s German last name was also butchered until he embraced “Wild Child” to move merchandise and then everyone learned how to say his name.

Despite his shocking second in the ’78 Eldora Nationals at age 20, Jac Haudenschild struggled to Outlaw prosperity. Eldora was where he did his best work, reaching third in the 1980 Eldora Nationals for the Nickles brothers, second there with Bob Hampshire then posting his first series victory during the ’82 Eldora Nationals for Gambler’s C.K Spurlock. Jac’s second series win was three years away. He got second for Doug Howells, third for DuWayne Starr, sixth for Emory Wisenbaker, sixth for Lenard McCarl, sixth for Bob Weikert, eighth with Frank Crash, and eighth for Connie Strohpaul. He did Devil’s Bowl for Bill Roynon and Tri-City for John McDaniel. Finally in the summer of 1985 aboard a car built and maintained by Jim McQueen for Fenton Gingerich, he conquered Kokomo. Haud’s third Outlaw win came at Placerville for Sacramento’s Ed Watson.

Jac traveled the 1986 World of Outlaws season for Saucier and Laverne Nance when they finished fifth in points despite an August appendectomy. They won at Williams Grove and the Indy Mile. El Paso’s Ted Lee provided the Stanton Challengers that Jac jockeyed to 1987 victories at Chico and Colorado National. Ted’s aluminum Wesmar Engines were illegal for Kings Royal so Jac won that $50k with Gary Stanton’s personal car. Gary Runyon’s red Challenger began 1988 10th in Tampa before it became Doty’s ride. Jac was 10th at Baylands for Bobby Allen when rain caused Bob to fly home to Hagerstown. He struck gold at Silver Dollar for Kepler then quit Kodiak tobacco three months later. He was fifth for Al Hamilton, fifth for Larry Trigueiro, 11th for Gil Sonner, and first at Eldora aboard Verlin Chupp’s Allen car.

Not to worry, he copped Calistoga for Red Powell. Six months later, he removed wings without permission and Red removed Jac’s name from Car 32u. He scrambled to fourth with Scott Sabolich, fourth with Ron Pack, fourth with Don Snow, and sixth for Denny Stewart. He also began 1990 A-mains for Glenn Stewart, Simon Lamb, and the Cahill brothers of Iowa City.

California’s first tour of 1991 found Jac fifth for Joe Von Schriltz but Joe’s car veered into Manzanita concrete and snapped Jac’s wrist. He cut the cast to compete for Steve Stapp and was sixth in Saucier’s car before Jac joined Minnesota’s Guy Forbrook. They topped Outlaws at Placerville but Jac quit Guy to return to the tour for Ken Woodruff and Casey Luna. Their blue Shaver Fords bagged Canandaigua and San Jose. During winter television however, Vivarin moved Dave Blaney to Luna while Pennzoil paired Jac with Ohio circuit judge Jack Elden.

Jac and Jack remained together for eight solid seasons. They started slowly, winning only once in 1993 though it paid $100k. They won five times in 1994 (only once against all Outlaws) though one paid $50k. Four wins and second in 1995 points was Jac’s highwater mark, but there were just three wins in the next two years. Mechanics filed in and out until Forbrook came aboard. Guy made Jac especially fast at Knoxville, scene for five of their 11 victories in 1998. Pennzoil pulled out and Elden lost full-time series status. Still, they achieved seven more wins in 1999-2000.

Fresno cattle broker Dennis Roth returned Jac to the tour in 2001 when fourth at Eldora was best. Haud joined Marshall Campbell’s new Wise guys but seventh was their peak. Jac jumped back into the Forbrook Five in 2002 to beat The Outlaws three times. Eldora was where Haud was second in 2003 for Hawaii’s Larry Woodward and first for $200k. He finally got Roth to an Outlaw win circle at Eldora in 2005.

Wright One Construction crew chief Dean Bruns hired Haud for six wins that culminated when Jac and “Bonzai” bagged the 2007 Brad Doty Classic. City Wide Insulation’s Leonard Lee won five Outlaw races with Haud in 2008. Injured a year later, Jac won nothing until 2010 when he stacked five for Lee and Lon Carnahan. He never again beat The Outlaws nor chased its entire tour.

If bitter, he never showed it. He seemed just as happy to convince a car owner to hire his daredevil son or coax Bonzai to Holmes County to school that son. In sporadic starts, Jac was second for Tom Leidig, third for Paul Silva, third for Jason Finley, third for Matt Wood, fourth with Mike Anderson, fourth with Rick Rogers, fifth for Bernie Stuebgen, eighth for Vern Wasson, and eighth for Jamie Miller. He ran the 2015 Williams Grove National Open for Tom Buch. Fourth at Eldora as owner/operator was new in 2018 when Sheldon Haudenschild began four years and 22 wins for Richard Marshall and Ricky Stenhouse Jr. Jac made a cameo at the 2021 Kings Royal in yellow Pennzoil graphics attached to an Abreu Vineyards vehicle.

The most exciting driver in World of Outlaws history may have been its most popular. Patty Haudenschild’s T-shirt receipts reflect such. Everyone loved her husband’s style: men, women, children. Car owners liked how he rarely complained and raced extremely hard. Mechanics never had to argue tires or shocks or whether Jac was riding the brake. He quit some seats before new swag had dried. He was an absolute “Wild Child” who made the whole world learn his name.