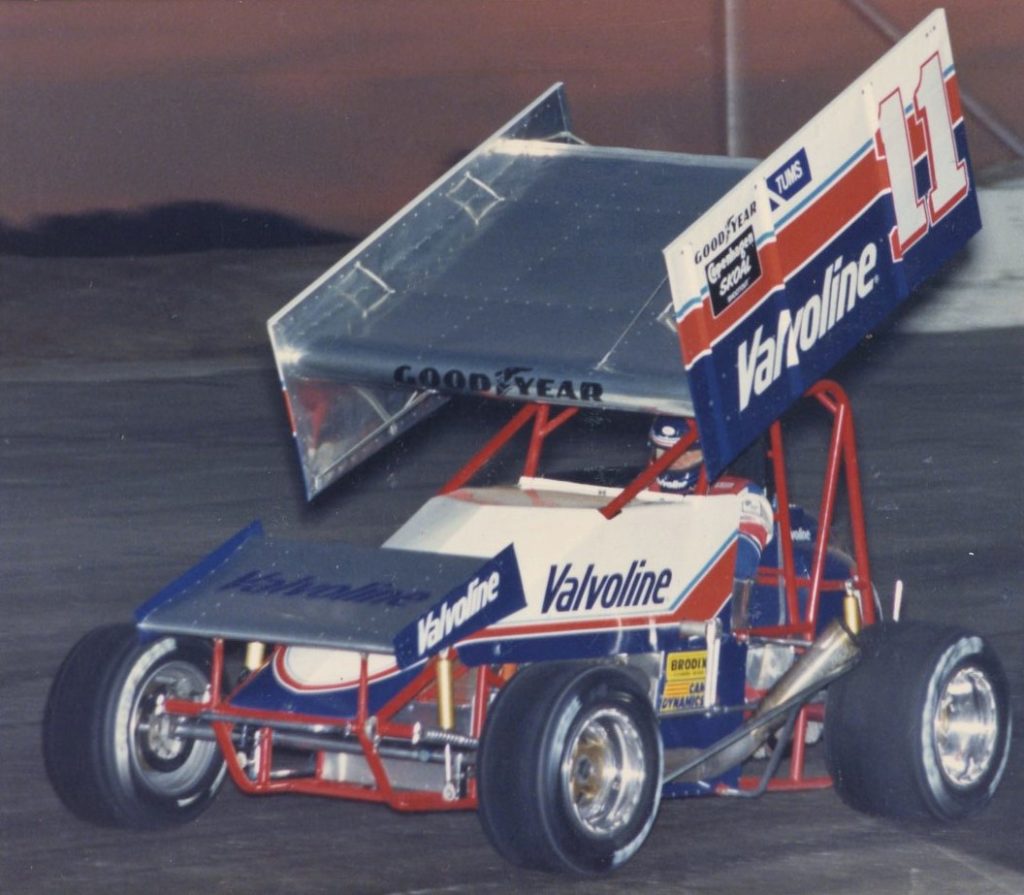 Ted Johnson joked that it would be a cold day in hell before his World of Outlaws ever laid rubber on asphalt. Yet on November 9, 1991 a decade of dismissals proved prophetic at Lakeside Speedway in Kansas City, KS. Thermometers never crested 40 degrees and winds were stiff.

Ted thought he could do asphalt better than USAC or the All Stars. And why not? Johnson absolutely believed that his World of Outlaws offered the best bang for the buck. Even his standard money would become the division’s deepest. But he had pressing concerns. To force asphalt participation by attaching points would have been unwise. Three weeks after his 1991 Outlaw campaign closed at North Texas Motor Speedway, Johnson scheduled a non-point weekend for K.C.

Kansas City, KS and Kansas City, MO are encircled by I-435. Inside that beltway at 92nd and Leavenworth Road, the original Lakeside Speedway operated for 33 years. After its 1988 Jayhawk National won by Doug Wolfgang, that famous half-mile became a parking lot to anyone with a buck to bet on the fastest greyhound. In less than a year, the new Lakeside opened in a Missouri River floodplain slightly north of I-435. During the ensuing 10 years as “new” slowly slipped from its title. Lakeside Speedway became a NASCAR outpost like neighboring I-70 Motor Speedway that reopened in Odessa, MO just as the “old” Lakeside got leveled. Could the first asphalt Outlaw race generate enough curiosity seekers to turn a profit in brutal November elements?

Mark Kinser had never turned a wheel on pavement, but his father knew a thing or two having won the Little 500, IRP and Salem with Dick Gaines. Karl Kinser stayed warm in his log cabin but sent an engine and Maxim chassis of his design. Mark spun twice in practice and again in his heat race before Bloom took pity. Jeff advised Mark to stiffen his right front corner. Problem solved, Kinser claimed the dash and a straightaway lead that Sammy Swindell could not overcome. Allen and Kerr crossed third and fourth after Hoosier Tires made Frank fastest at 101.54 MPH. Ohio jockeys Jacobs and Blaney finished fifth and sixth. Carson faded from second to seventh. Fedewa and Lower landed eighth and ninth in cars built by Brian Schnee.

Sunday morning’s Kansas City Star listed Saturday’s crowd at 2,200. Sunday was short one car after Jesse Plummer’s crack sent Parsons home. Sunday had no sun. Had there been a game at Arrowhead Stadium it might have been “football weather” but Chiefs were in sunny Anaheim with Steve Deberg under center and Christian Okoye in the Power-I. Fans of football and Sprint Cars watched Chiefs defeat Rams after Sammy Swindell whipped the field by half a lap. Swindell’s coil car on Goodyears added $8,200 to a $12k net.

Allen won the dash but watched Sammy disappear. Kinser’s third-place salvaged a scary heat race mess. Exiting Turn 4, Mark clipped a corner marker that cut brakes and steering. A long spin through the mud ended against a light pole fortunately padded. Kinser’s crew of Scott Gerkin, Jimmy Jones and Tube Houk needed every last minute to get their orange crate on the grid. Their toil was rewarded by Mark passing 16 cars. Blaney finished fourth aboard a Buckley wrenched by Don Ott. Kerr was fifth followed by Lower, who qualified quickest on a surface so cold that it lost half a second in 24 hours. Danny Smith smoked an engine on Saturday and scored seventh on Sunday with a Gaerte borrowed from Bob Vielhauer after Beaver Bob lost Carson’s engine. Lasoski and Fedewa finished eighth and ninth. Perryman dragged an old McCarl car down I-35, hot lapped on dirt tires, found some scuffs, and took home $1,100.

When the 1992 World of Outlaws schedule was released, only two asphalt arenas were on the agenda. Ted had an eye on the huge Minnesota State Fairgrounds, but settled for another two-day meet in Kansas City two months after Charlotte County Speedway in Punta Gorda, FL. Car counts being a concern, the very first All Star/Outlaw co-sanction drew 36 entries: 12 Outlaws, 12 All Stars, and 12 independents.

Blaney proved superior in Florida, keeping Steve Kinser from $4,000 on Tuesday and Sammy from $8,200 on Wednesday night. Lasoski’s Luna Ford finished third ahead of Danny Smith, fastest at 12.70. Joey Allen scored sixth and third after lowering the record to 12.12. Andy Hillenburg and Keith Kauffman were fourth and fifth.

After working their way from Florida through the early part of the 1992 season, the Outlaws returned to K.C. in April. Sammy took no prisoners, pocketing $4,000 on Saturday and $8,200 on Sunday afternoon after dropping the track record to 14.06.

Big changes came to Kansas City afterward. Lakeside became a dirt track in 2000 and dropped Sprint Car checkered flags over Elliott (SCRA) and Lasoski when the World of Outlaws Gumout Series paid a visit. A year later, Kansas Speedway opened in the shadow of two Lakesides. NASCAR had its Missouri River showcase.