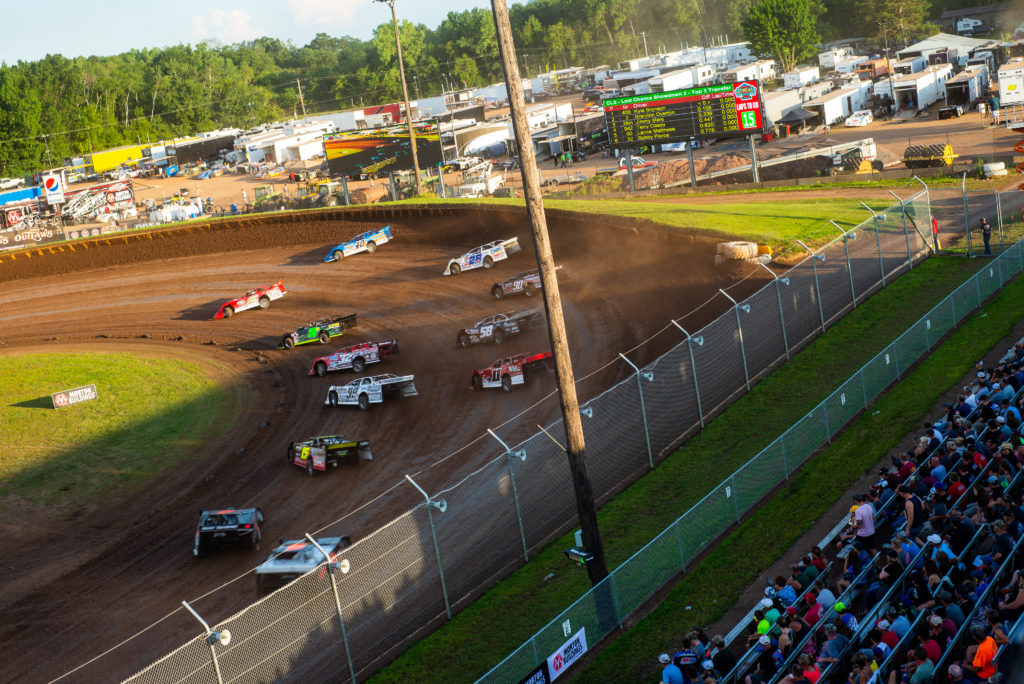 Best Drivers in the Country Head for Cedar Lake with Massive $250,000 Purse

In just over 24 hours, it will officially be time to kick off the 33rd annual USA Nationals at Cedar Lake Speedway.

A huge purse, bragging rights, and one of the coolest trophies in the sport has drawn the best drivers in Dirt Late Model Racing and fans from all across the country to the New Richmond, Wisc. 3/8th-mile for three days of racing with the World of Outlaws Morton Buildings Late Model Series.

The action kicks off on Thursday night with a standalone program including Qualifying, Heat Races, LCS’s, and a 30-lap, $6,000-to-win feature to give drivers some much needed track time. On Friday, double heats will set the stage for the all-important dash which lines up Saturday’s main event. The weekend concludes with a pair of Last Chance Showdowns and the 100-lap, $50,000-to-win, $3,000-to-start USA Nationals finale on Saturday night.

For fans unable to attend this three-day extravaganza in-person, DIRTVision has you covered with a LIVE pay-per-view all weekend long. You can purchase individual showings or the whole weekend package at www.dirtvision.com.

Here’s a small preview of some of the biggest names you can expect to see this weekend at Cedar Lake:

Brandon Sheppard (New Berlin, Ill.) – The current World of Outlaws Morton Buildings Late Model Series points leader enters on a hot streak with 10 wins in his last 16 series starts aboard the Rocket1 Racing No. 1. Just last month, “The Rocket Shepp” ran second and picked up a victory in the Independence Day Shootout at the Cedar Lake 3/8th-mile. The 2018 USA Nationals champion has three consecutive top five finishes at this event with finishes of 4th-1st-3rd since 2017.

Billy Moyer (Batesville, Ark.) – A five-time USA Nationals champion, “Mr. Smooth” owns arguably the most remarkable resume in event history. He is either leading or tied for the lead in major USA Nationals categories such as titles (5), podium appearances (9), and top five results (10). All five titles came in a six-year span across the late 1980’s and early 1990’s, but the ageless wonder has still found success in recent years. In 2015, at the age of 57, he finished 2nd in the 100-lapper to Jonathan Davenport. Just last night in a USA Nationals prequel at Beaver Dam (WI) Raceway, Moyer guided the Capital Race Cars No. 21 to a second-place bid behind Jimmy Owens, building momentum as he chases a sixth eagle.

Scott Bloomquist (Mooresburg, Tenn.) – Like Moyer, “Black Sunshine” owns five USA Nationals titles himself with wins coming in 1999, 2003, 2006, 2008, and 2010. Bloomquist got back into a rhythm on Tuesday night with a hard-charging 19th-to-9th effort at Beaver Dam ahead of his return to Cedar Lake. The winning car owner with Chris Madden at the wheel last year, a breakthrough $50,000 for Bloomer this weekend could make Scott Bloomquist Racing the first back-to-back champion of USA Nationals since Jack Boggs did it in 1994-95.

Jimmy Mars (Menomonie, Wisc.) – One of the fan favorites every year, two-time USA Nationals champion Jimmy Mars hails from just down the road in Menomonie, Wisconsin. “The Iceman” holds a reputation at Cedar Lake that expands more than two decades, including his 1996 ($29,000) and 2009 ($50,000) triumphs in the annual event. With 10 top five finishes to his name, Mars sits at the top of the USA Nationals list alongside Billy Moyer and Brian Birkhofer. Mechanical issues kept him sidelined from Tuesday’s Beaver Dam show, but the MB Customs namesake will be ready to roll for Thursday’s opener to the three-day race.

Jimmy Owens (Newport, Tenn.) – Along with Sheppard, “The Newport Nightmare” has been the most daunting driver in Dirt Late Model Racing this year. With 13 total wins on the season, his most recent on Tuesday night at Beaver Dam, Owens and his Ramirez Motorsports No. 20 Rocket Chassis have been a force to be reckoned with everywhere they go. The 2014 USA Nationals champion, Owens comes into this weekend as one of the heavy favorites to walk away with another eagle trophy.

Darrell Lanigan (Union, Ky.) – Another former USA Nationals champion, “The Bluegrass Bandit” had his one shining moment at Cedar Lake back in 2012 with his $50,000 title. The driver of the Viper Motorsports No. 29V Barry Wright ICON has had a love-hate relationship with the New Richmond, Wisc. track, finding success with three top five efforts, but faltering in seven other finales at the crown jewel. The three-time World of Outlaws champion recently snapped a dry spell with his 74th career win at Red River Valley (ND) Speedway, and could bank #75 in grand fashion this weekend.

Dennis Erb Jr. (Carpentersville, Ill.) – Finding his groove of late at Cedar Lake Speedway, Dennis Erb Jr. brings in four USA Nationals top ten finishes from his last four feature starts at the crown jewel. He was third in the 2015 USA Nationals, a podium run worth $10,000. In both World of Outlaws events at Cedar Lake last month, Erb finished fourth in both features aboard his Rocket Chassis No. 28.

Chase Junghans (Manhattan, Kans.) – Aiming for his sixth career USA Nationals feature start, Chase Junghans will look to sneak back into the top five of the $50,000-to-win race for the first time since 2018. His finale finishes of 5th in 2015 and 4th in 2018 have been the highlights of the Kansas racers’ ventures to Wisconsin. Just last week, Junghans put his No. 18 on the outside pole of the $25,000-to-win Hoosier Dirt Shootout, now he’ll look to keep the momentum alive with even more money up for grabs.

Tyler Erb (New Waverly, Tex.) – Last year’s pole sitter, “Terbo” returns for his fifth USA Nationals this weekend with redemption on his mind. A lap one error took the captivating Texas racer from the front row to a 16th-place effort at the conclusion of 100 laps. His best career finish at USA Nationals remains his 2016 debut which resulted in a ninth-place run. This year, Erb and his Best Performance Motorsports No. 1T have been clicking on all cylinders with multiple wins in both the Lucas Oil Late Model Series and the DIRTcar Summer Nationals Tour.

Ricky Weiss (Headingley, Man.) – The leading Canadian on tour, “The Manitoba Missile” has seen his ups and downs with the World of Outlaws this year, but remains a solid second in the championship points. Weiss will be going for his third USA Nationals feature start this weekend with his previous outings in 2018 and 2019. The Drydene Performance Products No. 7 has been a stout contender at Cedar Lake in the past – finishing 4th at last year’s USA Nationals and earning a podium in July’s visit to the Wisconsin 3/8th-mile.

Bobby Pierce (Oakwood, Ill.) – “The Smooth Operator” continues the hunt for not only his first USA Nationals crown this weekend, but also his first career World of Outlaws Late Model Series win. The No. 32 has always been strong at Cedar Lake, recording six top ten efforts and two podium finishes in his eight USA Nationals feature starts. The multi-time DIRTcar Summer Nationals will be bound and determined to get the monkey off his back and take the big $50,000 payday this weekend.

Shane Clanton (Zebulon, Ga.) – An 11-time feature starter of the USA Nationals, “The Georgia Bulldog” has picked up three top ten finishes in the event with his best run coming back in 2016 as a seventh-place finish. The 46-time World of Outlaws Late Model Series winner brings his Skyline Motorsports, Capital Race Cars No. 25 into Cedar Lake this weekend after a strong second-place preliminary performance at Kokomo Speedway last week.

Cade Dillard (Robeline, La.) – Outside of Brandon Sheppard, Dillard and his MB Customs No. 97 crew have been the most consistent unit on tour since returning to racing after the pandemic. Lighting a fire and igniting a sophomore surge, “Thriller” has meticulously pieced together the most impressive stretch of his World of Outlaws career. Another podium finish last night at Beaver Dam Raceway put him to third in the championship standings as the second half of the year gets underway.

Brian Shirley (Chatham, Ill.) – The current DIRTcar Summer Nationals points leader, “Squirrel” is fresh off a fourth-place outing with the World of Outlaws on Tuesday night at Beaver Dam Raceway. In six attempts at the USA Nationals, Shirley has consistently been a frontrunner with five top ten efforts for the No. 3S. His best-career result at the $50,000-to-win show came just two years ago when he trailed Brandon Sheppard to the stripe for a second-place finish worth $20,0000.

Kyle Bronson (Jacksonville, Fla.) – Attending the last three USA Nationals, “Killer” Kyle Bronson has been quick at the Cedar Lake 3/8th-mile, but lacked the luck and track position needed for the 100-lap feature. Appearing in all three main events, the Florida native has racked up results of 25th, 12th, and 17th. This year, the Lucas Oil Late Model regular brings in some much needed confidence from a top five showing in Tuesday’s World of Outlaws event at Beaver Dam.

Rick Eckert (York, Pa.) – This weekend’s 33rd annual USA Nationals marks the 16th appearance for “Scrub” Rick Eckert at the Cedar Lake crown jewel. Outside of his 2002 title worth $40,000 at the time, the former World of Outlaws champion has only managed one other top five bid in the 100-lapper, that coming in 1997. He’s always been steady in the top ten, however, clicking off seven top ten results across all those starts.

Ashton Winger (Hampton, Ga.) – Making his USA Nationals debut, 20-year old Ashton Winger will have to get used to the confines of the special format, extra money, and added pressure, but the Cedar Lake Speedway 3/8th-mile is a track that he’s already conquered. Last month, the Rookie of the Year leader fought off Brandon Sheppard in a 40-lap duel to win his first career World of Outlaws Late Model Series feature on July 3. The competition stacks up much higher this go around, but it’s a challenge the young gun is ready to face as he goes for his first career crown jewel title.

Ross Bailes (Clover, S.C.) – Making his first attempt at Cedar Lake’s USA Nationals, Ross Bailes has made the haul from Clover, S.C. to New Richmond, Wisc. for this weekend’s big $50,000-to-win show. A World of Outlaws winner at Cherokee (SC) Speedway in 2018, Bailes could nab the biggest win of his career this weekend aboard the No. 87.