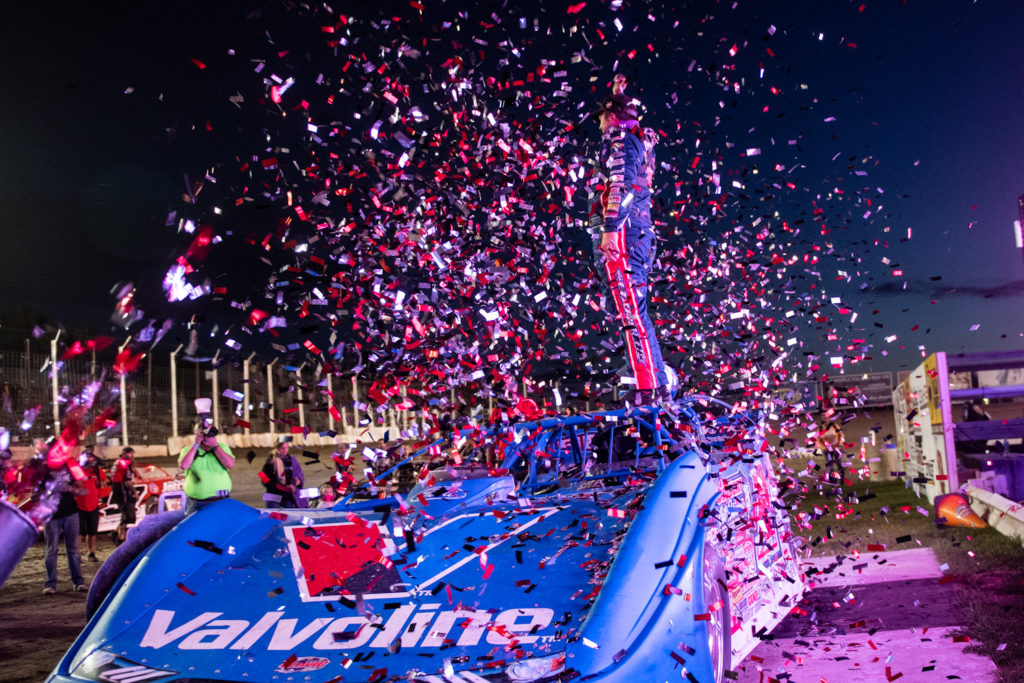 After an agonizing one-race losing streak, Brandon Sheppard and Rocket1 Racing returned to their winning ways on Sunday night at River Cities Speedway. Of course in their patented style, they couldn’t do it without rewriting the record books.

Taking advantage of lap traffic and reeling in early race leader Ricky Weiss, “The Rocket Shepp” guided his Valvoline No. 1 Durham powered Rocket to the lead on the 32nd lap and never looked back. Surviving a late bid from a charging Cade Dillard, the New Berlin, Ill. native successfully sealed the deal on his second-straight win at the Grand Forks, N.D. track and the 65th of his World of Outlaws Morton Buildings Late Model Series career.

Reaching the ten win mark in 2020, Sheppard officially became the first driver in the 19-year history of the World of Outlaws Late Models to record four different 10-wins seasons. With all four of those occurrences coming over the last four years, B-Shepp has rattled off campaigns of 18 wins in 2017, 13 wins in 2018, 18 wins again in 2019, and now 10 wins and counting in 2020.

“This is all so surreal for me,” Sheppard said of his latest in a long line of accomplishments. “I was a kid that grew up at Macon, Farmer City, Lincoln, Jacksonville; and now I’m out here on the road living the dream. Mark [Richards] picked me up and gave me this opportunity to get the experienced I needed at tracks all over the country and that is what got us here to be as consistent as we are. I’m just having a ton of fun. In my opinion, we can’t go to enough races right now. Let’s keep going!”

Starting on the outside pole of the 50-lap, $10,000-to-win feature, Sheppard lined up next to Weiss, who drew the pole position in the Morton Buildings redraw for the second night in a row. Edging out Sheppard through the opening corners, Weiss pointed his Drydene Performance Products No. 7 Team Zero Race Car to the lead and set a quick pace in the beginning stages as he snuck away from Sheppard and the field.

A lap 13 caution for a slowing Boom Briggs proved to be the only stoppage of the race and gave fans a dicey restart to watch on the quarter-mile. While Donny Schatz, the hometown hero and 10x World of Outlaws Sprint Car Champion, moved into the top five; Weiss was out front and pulling away from Sheppard before lap traffic changed it all.

Stalking Weiss in the midst of a lap traffic frenzy, B-Shepp closed in on the No. 7 and finally struck on lap 32, darting to the outside and storming around the Canadian to take command of the race lead. The Headingley, Man. native stayed right with the points leader, however, offering a series of challenges to retake the top spot before a lap 36 bobble sent him slipping to third and gave Dillard the second spot.

“The way track was I was glad that we were getting to lap traffic, because I knew that was probably the only way I could get around him,” Sheppard said on tracking down Weiss. “This place relies so heavily on momentum. Until lap traffic slows us down, you’re kind of married to a momentum line. Once we got there I could run the top, run the bottom, feel out where I needed to be and where I could pass him at. He kept guarding the bottom after I showed him a nose and then those lap cars went down low that one lap and left me a lane up high; and I just sent it off in there and it stuck.”

With Dillard of Robeline, La. controlling the runner-up slot over the final quarter, fans watched with anticipation as the MB Customs No. 97 consistently chopped into Sheppard’s lead and ran down the No. 1. Falling a few laps short, “Thriller” ran out of time in his pursuit of win #3 this year, but did come close to stealing one as he crossed the checkered flag a mere .347 seconds behind Sheppard.

“We’ve got a great baseline set up right now that seems to go well everywhere we unload, it’s just about making the right tweaks each night,” Dillard noted on his excellent runs of late. “We went with a little different tire than everyone else, so I was worried about keeping it under me there at the beginning. About ten laps to go though I stepped up and the car felt a lot better. It’s a lot of run racing with Brandon and Ricky right, we all race hard, yet so clean with each other. It’s really rewarding to be up on here on the front stretch every night.”

Concluding the podium with back-to-back third-place results in North Dakota was Weiss aboard the Drydene No. 7. For the second straight night, the Canadian ace drew the pole position of the feature and led plenty of laps early on, but faded once slipping from the lead. A winner of two career World of Outlaws Late Model features – both in 2020 – Weiss couldn’t help but think lap traffic was a pivotal point in costing him a potential third win.

“It’s not that they’re trying to block you, I know that, but man they’re racing you as hard as they can,” Weiss spoke on racing with the back markers. “Had that gone a little different maybe we could’ve passed a little better. I’m still happy. We’ve been working on this thing and have a lot of speed right now. I think we’ve finally got something that can contend with Brandon every night. You never know when things can go around that other way. You just have to keep digging, keep being there at the front, keep being prepared, and those wins will come our way.”

Rounding out the top five at River Cities was the No. 28 of Dennis Erb Jr. in fourth, who earned his third-career Fast Time Award earlier in the night during qualifying; and Dustin Strand from right there in Grand Forks, N.D. with a career-best finish of fifth against the World of Outlaws.

Donny Schatz concluded his rare weekend with the Late Models by finishing out sixth in the 50-lapper. Chase Junghans of Manhattan, Kans. racked up his 19th top ten effort of the year with a seventh-place result. Darrell Lanigan followed his 74th career win from the night before at Red River Valley Speedway by coming home in eighth at River Cities. Brad Seng of Grand Forks, N.D. got his own career-best finish with a ninth-place run in his No. 12S. Closing out the top ten was Rookie of the Year leader, Ashton Winger, in his Franklin Enterprises No. 12 entry.

After a grueling two-week Northern Swing, the World of Outlaws Morton Buildings Late Model Series will take next weekend off before returning to action at Davenport (Iowa) Speedway on Tuesday, July 28. Later that weekend on July 31, August 1, the “Hoosier Dirt Shootout” takes center stage at Kokomo (Ind.) Speedway with $25,000 on the line in a format identical to the famed Prairie Dirt Classic, which has been postponed to 2021. Tickets for all of those events can be bought HERE.