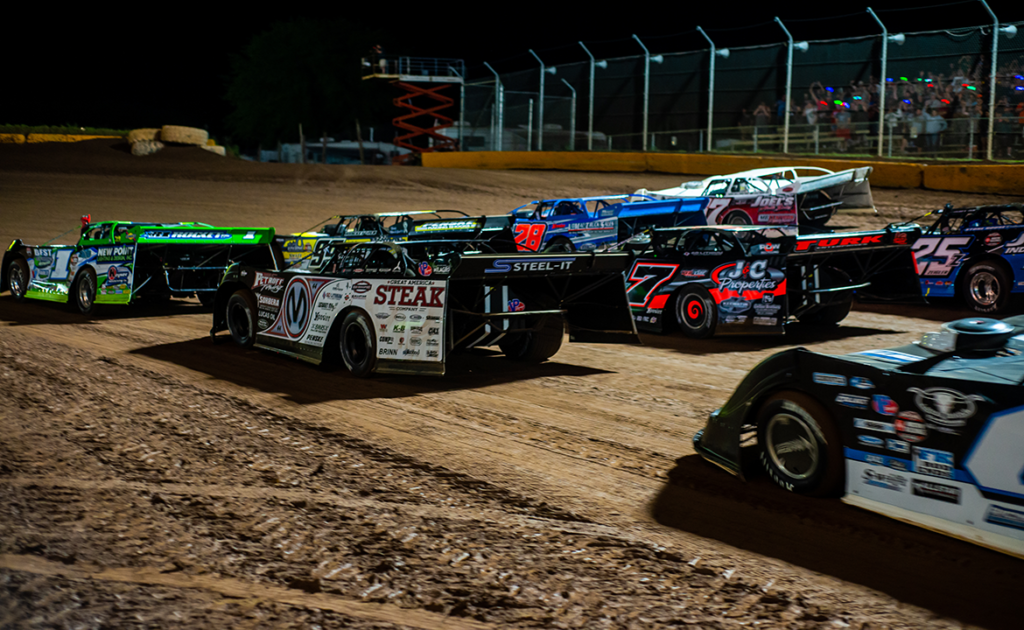 VADO, NM – Just two weeks remain until the 2020 World of Outlaws Morton Buildings Late Model Series season kicks off in the inaugural Battle at the Border at New Mexico’s brand-new Vado Speedway Park, Jan. 2-5. All of the offseason changes and new developments for the Outlaws will come to the forefront in the tour’s first three points races, and the excitement surrounding the new venue will surely bring out the best in competition.

Located just 30 miles north of El Paso, TX, and 20 minutes south of Las Cruces, NM, the inaugural visit to Vado and the state of New Mexico marks the furthest west the Outlaws have ever raced. As of December 2019, the farthest visits west came at the Gillette Thunder Speedway in Gillette, WY, in July of 2008, 2009, 2011 and 2012.

The Outlaws will hit the track in New Mexico for a night of practice on Thursday, Jan. 2 and follow that up with three-straight nights of points racing action, Fri-Sun, Jan. 3-5. Friday and Saturday night will feature 30-lap, $5,000-to-win main events, while Sunday’s headlining show boasts a 75-lap, $15,000-to-win Feature.

These dates also mark another piece of World of Outlaws history as the earliest in the calendar year that a season has ever started. Prior to 2020, the earliest kickoff to an Outlaws season came in its revival year of 2004, when 2007 Series champion Steve Francis, of Ashland, KY, took the win in the opening round of Volusia Speedway Park’s DIRTcar Nationals on Feb. 3.

The most recent track debut for the Outlaws came back on July 14 at Menomonie, WI’s Red Cedar Speedway, where Chase Junghans, of Manhattan, KS, scored his first and only win of the 2019 season by leading all 50 laps of the Morton Buildings Feature.

Rocket1 Racing driver Brandon Sheppard, of New Berlin, IL, comes into Vado as the defending World of Outlaws champion after bagging a record-tying 18 Morton Buildings Feature victories in his 2019 campaign. Racking up close to $1,000,000 in total prize money across several Dirt Late Model crown jewel events last year, including Fairbury Speedway’s $30,000-to-win Prairie Dirt Classic, Sheppard cruised to five World of Outlaws victories in-a-row on two separate occasions over the year. This now stands, statistically, as the best performance by a single driver on the World of Outlaws circuit since its inception in 1988.

2019 was almost nothing but the Sheppard show. But 2020 is shaping up to be quite a bit different on the World of Outlaws tour. Scott Bloomquist Racing stars Scott Bloomquist, of Mooresburg, TN, and Chris Madden, of Gray Court, SC, have brought their rejuvenated partnership into the limelight for 2020, signing blockbuster sponsorship deals with the Official Motor Oil and DEF of the World of Outlaws and DIRTcar Racing, Drydene Performance Products. Together, they will tackle the entire tour as two parts of a three-driver stable, more commonly known as Team Zero, and give Sheppard what could be the biggest challenge he and the Rocket Chassis house car team have faced since falling short of the Series crown two seasons ago.

“It’s exciting. I’ve got such a high win percentage on my first visit to a racetrack in my career, it’s in the 70s,” Bloomquist said about going to new tracks like Vado in a recent interview with DIRTVision. “There’s a number of tracks I haven’t been to, and I like that. That’s exciting to me.”

2019 Rookie of the Year Ricky Weiss, of Headingley, MB, Canada, recently announced his intentions of following the World of Outlaws tour again in 2020, also with the backing of Drydene. He joins the list of favorites for the Series championship in 2020 as the third member of Team Zero and third driver on the full-time roster driving a chassis built by Bloomquist. Make no mistake, this Rocket1 vs. Team Zero battle will surely be one to watch both on the track and in the points standings all season long, and it all kicks off in just two weeks’ time in Vado.

2019 Vado Speedway Park Late Model track champion Jake Gallardo, of Las Cruces, NM, will lead the local Super Late Model charge against the Outlaws and the other national invaders. Tallying an impressive 10 Late Model Feature wins in 11 starts in weekly action this past season, Gallardo will be one of the local drivers with plans to race in the Battle at the Border. He and his father, Fito Gallardo, are also Modified stars in New Mexico, and Fito is committed to racing against the Outlaws next month as well.

Joining the Outlaws over this opening weekend program will be the local Pro Modifieds and X-Modifieds. Hot Laps are scheduled for a 6 p.m. start time on Friday and 3 p.m. on Saturday and Sunday. NOTE: these times could potentially be moved up by an hour or more in advance of the event, depending on weather conditions. Fans can stay tuned to Series social media channels for all the schedule and race day updates (Twitter @WoOLateModels, Facebook @worldofoutlawslatemodelseries).

Tickets for the inaugural Battle at the Border, hosted by Vado Speedway Park and the World of Outlaws Morton Buildings Late Model Series, are on sale now.

When fans can’t be at the track, they can keep up with every lap of World of Outlaws action LIVE on DIRTVision.com with a Fast Pass subscription, only $39 per month.