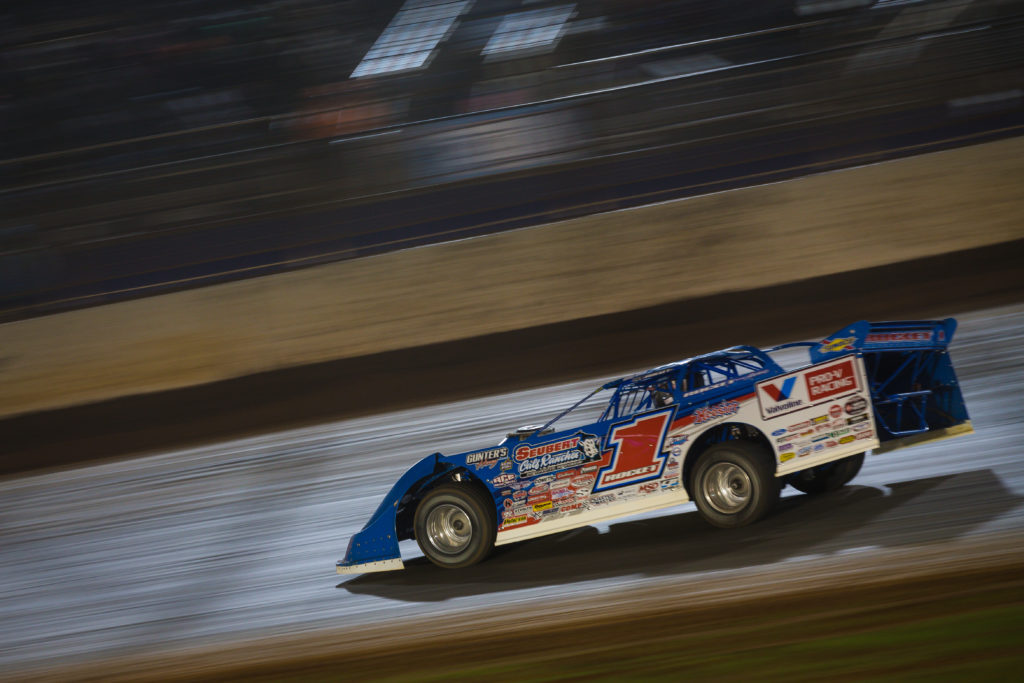 CONCORD, NC – Racing journalists, industry professionals, statistical experts… all of their writings, findings and compilations have contributed to one common theme seen across the Dirt Late Model world in 2019. The driver-owner-crew combination of Brandon Sheppard, Mark Richards and all of Rocket1 Racing have just completed one of the greatest seasons in dirt track racing history.

The money won, to the statistical records broken, to the numerous appearances in Victory Lane, Sheppard & Co. have been nothing short of just plain dominant since the 2019 season kicked off 10 months ago.

In Saturday’s Can-Am World Finals season finale at The Dirt Track at Charlotte Motor Speedway, Sheppard and the team were shooting for one final World of Outlaws Morton Buildings Late Model Series record to break before the season came to a close, but fell short of the 19-win mark with an 11th-place finish to Jimmy Owens’ seventh career World of Outlaws win at The Dirt Track — now the most of any driver at “America’s Home for Racing.”

“The car’s been really good all weekend, we just had a little bit of misfortune the night before,” Owens said in Victory Lane after the race. “I’m just glad to get this Red Line Oil, Reece Monument, Ramirez Motorsports car home in the lead.”

Hot on Owens’ tail in the closing stages was none other than the 2019 Rookie of the Year, Ricky Weiss. With his runner-up finish, rebounding from a 14th-place result the night before, the Headingly, Manitoba-native now becomes the highest-finishing Rookie in year-end points standings in Series history at third. For never having raced at Charlotte prior to the weekend, Weiss showed, once again, why he’s one of the most versatile drivers on the circuit at any racetrack.

Shane Clanton capped off his 2019 campaign with a 12th-place effort over 50 laps, good enough to defend his runner-up spot in the points standings and rebound from his disappointing seventh-place result in last year’s overall rankings. Chase Junghans and Darrell Lanigan had their struggles over the weekend but were able to hang onto their top-five spots in points, giving Junghans his best-ever year-end result and Lanigan the motivation to come back even stronger in 2020.

After the confetti showers had fallen and the trophy presentations completed in Victory Lane, the feeling of a sixth World of Outlaws championship title finally began to sink in for Sheppard and car owner Mark Richards. They may not have come home with the immediate result they wanted, but 18 wins and a record-breaking 340-point margin over second-place in the overall points standings was more than good enough for the boys in blue.

“It was just another one of those years,” Sheppard said. “We didn’t get the 19th win like we wanted, but at the end of the day, that gives us something to chase next year. The record is still there, and we know we can do it, it’s just a matter of putting a full season together, doing the same thing we did this year and getting lucky once more.”

With eight points races remaining back in September and only one left to win before the end of the season, Sheppard continued to post good finishes, but his hot streak seemed to cool. Northeast and Southeast locals started getting the better of the entire World of Outlaws roster more times than not, and things got tough for the Rocket house car to produce the success it had gotten so accustomed to over the summer.

But instead of focusing on the things they didn’t do at season’s end, the Rocket1 gang will head back to Rocket Chassis headquarters in Shinnston, WV, and take pride in each and every big trophy/check they did earn this year because they know, there’s never been a season like the one they just completed before, and no one knows if this level of success will ever be reached again.

“In the last eight races, not everything fell our way,” Sheppard said. “But, we won the Dirt Track World Championship, we won $30,000 at Fairbury… it’s not like we weren’t there, it’s just that stuff didn’t go our way like it had been all year. We have nothing to complain about, we just didn’t get the record. And that’s nothing to hang our heads over.

As he does with each and every victory, Sheppard took the time to thank those that helped get him here.

“It’s just a testament to how awesome my crew is,” Sheppard said. “Mark Richards, Steve Baker, Danny White, Austin Hargrove, Joel Rogers – those guys are the hardest-working bunch of guys out there, and the best crew I could ever ask for.”

Five of the last seven World of Outlaws championship trophies have been handed off to a driver who pilots a Rocket Chassis XR1. Truly, a big testament to the most popular chassis model in Dirt Late Model racing and the business that Mark Richards and Steve Baker have built over the last two-plus decades.

“We put a lot of work into it for a lot of years,” Richards said. “Now, we get to see it paying off, and it’s great to know that we’ve put all the hours in, the late nights and all the sacrifices we’ve made, being away from home.”

“But this would be hard to do without Steve Baker, and I’m grateful to have such a great partner.”

Having driven Rocket Chassis before coming to the Rocket1 team, Sheppard concurs.

“Mark and Steve have developed the best racecar chassis out there, in my opinion,” Sheppard said. “And I’m sure a lot of other people would agree as well. It’s phenomenal what we can do, night-in and night-out with this thing.”

At almost 60 years old, Richards has gained what seems like a lifetime of experience in the shop, working every day to perfect his craft. But in recent years, he’s found some youth in the right crew members that helped to put the Rocket1 car in World of Outlaws Victory Lane a record-tying 18 times this year.

“It makes me feel good that I can still be out here doing this at 59,” Richards said. “It keeps me feeling young. I feel like I’m 39, so… I feel way better today than I did six or eight years ago because I was doing way more of the work and had way more pressure on me. These guys take the pressure off and makes it to where I feel like I can go for a while.”

Taking a slight glance back to his first Series crown in 2017, Sheppard said the first was unique because it was all so new. But he knew it was only the first chapter in a story of success, destined to be re-written multiple times over.

“The first one was definitely special,” he said. “It was a new team, new everything to me, and to most of the guys too. For us to do it that first year was amazing, and I knew there were more big things to come.”

The entire World of Outlaws family would like to thank all of the great race fans that came out to watch “The Most Powerful Late Models on the Planet” over the 2019 season, and look forward to making 2020 even more exciting. The opening round of the Battle at the Border at Vado Speedway Park hits the track Jan 2-5; catch all of the action live on DIRTVision!