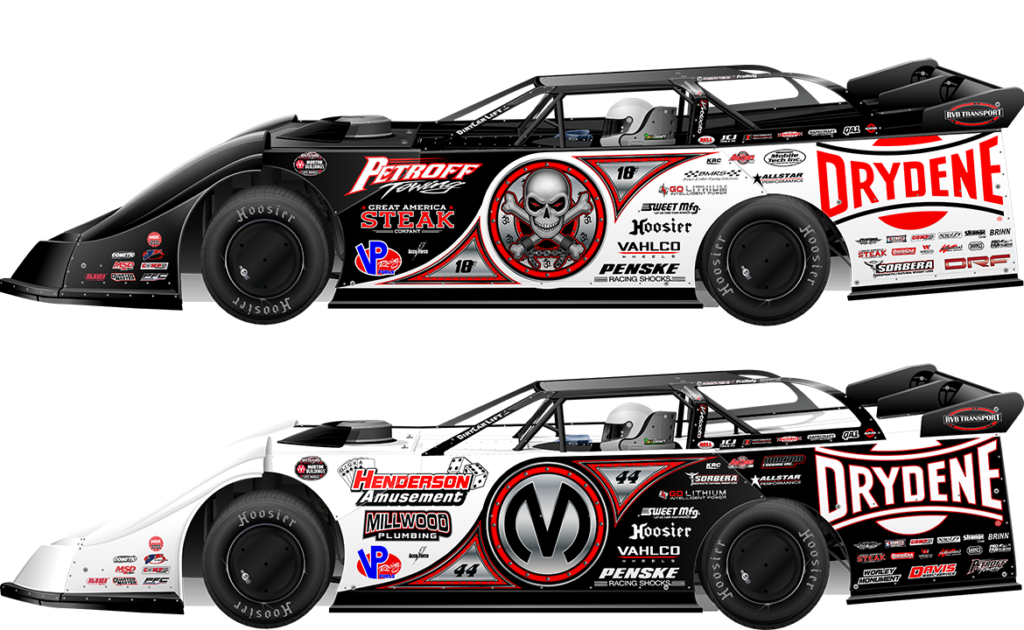 INDIANAPOLIS, IN — Legendary Dirt Late Model racer Scott Bloomquist and Chris Madden, one of the country’s hottest Dirt Late Model stars, are both returning to the World of Outlaws Morton Buildings Late Model Series full time in 2020 with backing from Drydene Performance Products. Their campaign is set to start in January at Vado Speedway Park for the Inaugural Battle at the Border before they head to the World’s Fastest Half-Mile, Volusia Speedway Park in February.

Madden, of Gray Court, SC, has nearly 250 wins in his career and raced the 2017 and 2018 seasons on the World of Outlaws tour, where he finished second and third in the championship. He claimed the Big Gator title at the DIRTcar Nationals in 2018 as well as capturing the Firecracker 100. Madden has also won the first two races of the new Drydene Xtreme DIRTcar Series this winter.

With Drydene Performance Products announcing sponsorship of Scott Bloomquist Racing on Thursday at the Performance Racing Industry show, the two plan an all-out assault on the 2020 World of Outlaws Morton Buildings Late Model Series championship, which has been won by Rocket Chassis’ Brandon Sheppard two of the past three seasons, including 2019 when Sheppard tied the all-time win record with 18 victories.

Returning to the World of Outlaws tour, which earlier this week announced a 51-race schedule beginning Jan. 2 at Vado Speedway Park in New Mexico, will present Bloomquist with a number of new venues where he has not raced. That said, Bloomquist was involved in the creation of the new Vado track.

“It’s exciting,” Bloomquist said. “I have such a high-percentage win ratio for my first visits to tracks. It’s in the 70-some percent. There’s a number of tracks I haven’t been to, and I like that, that’s exciting to me. If I can come back and pull off a championship that would be awesome. Hopefully one of us will.”

Madden joined Scott Bloomquist Racing last summer and things quickly clicked. He went on one of the greatest streaks ever in Dirt Late Model racing, including the biggest win of his career, the World of Outlaws $50,000-to-win USA Nationals at Cedar Lake Speedway, and culminating with a win on the opening night of the Can-Am World Finals at The Dirt Track at Charlotte.

“Obviously, my goal is to win the championship,” Madden said. “I was close in ’18 and we fell out of five races. If we could go back, and I had not fallen out of those races, we would have got a championship that year. So, I want to win it, and this is the team I want to win it with.”

The World of Outlaws Morton Buildings Late Model Series kicks off the season in just a few weeks with the three-day Battle at the Border at Vado Speedway Park in Vado, NM. The event begins Jan. 2 with a practice night followed by three nights of Feature events, culminating in the $15,000-to-win finale on Sunday, Jan. 5.

BATTLE AT THE BORDER TICKETS