NO FEAR: Las Cruces-native Plans Run vs. Outlaws at Vado 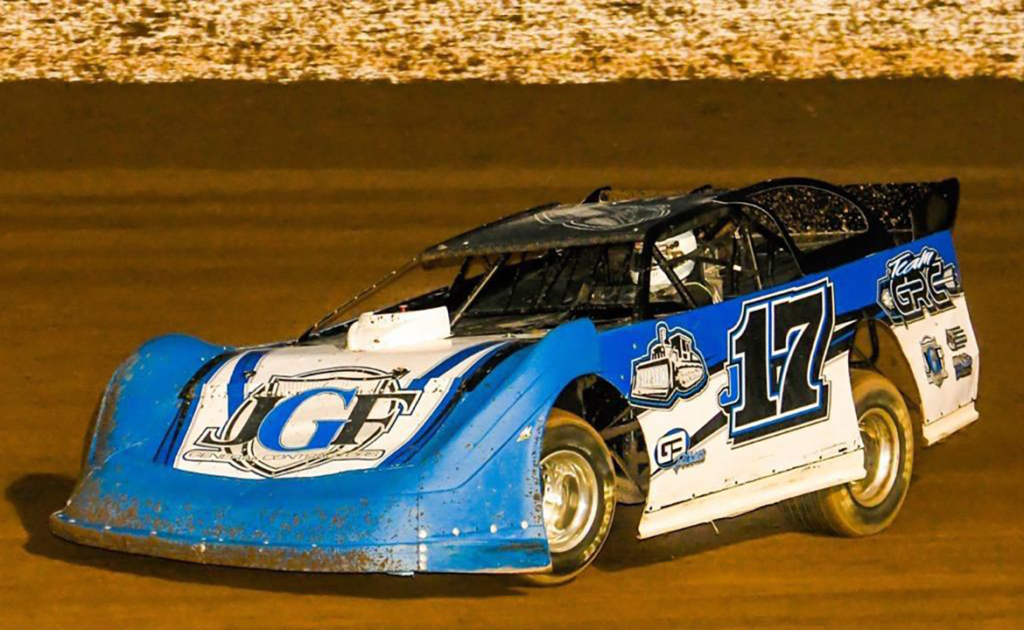 A drive through pecan and pistachio orchards and down a dusty road brings you to the Gallardo family compound which sits on top of a hill overlooking the Mesilla Valley. The breathtaking view of the Organ Mountains standing rugged and proud between the desert terrain and wide-open skies makes one think of the Wild West, cowboys, and outlaws. Jacob grew up here, just five minutes down the road from the now-closed Southern New Mexico Speedway.

“My dad [Fito Gallardo] started racing in 1999 when I was 6 years old, and we’ve been racing ever since. I started going to the races with him, and he got me a go-kart when I was like eight or nine, then I started racing street stocks ‘til I was 12. After that I got into an A-Mod when I was 15,” Jacob says.

There are race cars everywhere, and two giant but friendly dogs patrol the area. Outside of the shop, in a covered bay sits three Modified chassis and a very old Rocket Late Model Chassis. Jacob points to a trailer and tells me his dad’s car is in it. He will be running the Battle of the Border as well.

Inside the shop are two more Modifieds, one in the air on a lift, and the other ready to roll out on jack stands. A glance at the trophy shelf and banners on the wall reveal that both drivers out of this shop have had success. In front of that sits Jacob’s Late Model. A 2015 Rocket chassis, it is one of the last Blue Front cars.

Jake has taken his Modified out on the road several times to compete in USMTS and USRA races as far away as Missouri and Nebraska. Winning an impressive 48 races in his A-Mod, he began racing Late Models in 2014. He’s won 31 races over the last 5 years in his #17 Gallardo Construction Late Model, but he still feels more at home in his Modified.

“In a Modified, I feel confident. I feel like we could take our Modified anywhere and run with the best of them. But because we don’t race the Late Model that often, I mean we only raced it twelve times this year, so I don’t really feel confident to go [on the road] with those guys. Not yet anyway.”

But Jake’s not going to shy away from competing with the World of Outlaws Late Models. The owner of a local gym called G3 Fitness Center, he is a clearly focused and disciplined individual. He’s also confident. Not cocky. He has that air about him that great drivers do. The intangible thing that just cannot be contrived or engineered. Or bought for that matter.

He sees the World of Outlaws coming to town as an opportunity.

While the cars he races against on a weekly basis are very similar to the world’s most powerful Late Models that he will be taking on in the Battle at the Border, they have to run a 7000 rpm rev-limiter chip, limiting straightaway speed and bogging the engine down off the corner. Being able to run his engine to its full potential will give him a proper measuring stick to see where he stacks up against the nation’s best drivers.

1,539 miles away from Eldora Speedway and a 21-hour drive from Fairbury Speedway, Vado Speedway Park is a long way away from the center of Dirt Late Model racing. Race fans here are more familiar with Sprint Cars and Modifieds. Jake feels that seeing the World of Outlaws in person will turn heads. With the increased RPMs available a necessary gear change, lap times at the three-eighths mile could be more than a second faster than the weekly average.

“The fans down here aren’t that familiar with Late Models. Having the World of Outlaws come to town is exciting because they’ll get a chance to see how fast these things are. The fans will be just saying ‘wow’ when they see it. The track has really long straightaways and when the cushion is all the way up against the wall it’s really wide and fast. I just think that the fans are going to be blown away,” he says with a grin.

I ask him how he thinks the event will turnout, and he optimistically tells me, “I honestly think that, while the Wild West Shootout in Arizona is a big race, I feel like we’re going to have a faster field here. The WWSO will have a shitload of cars, a lot of locals and regional guys. But when it comes to the superstars, I think we might have even more of them here for this event.”

As I drive back down the valley to Las Cruces I think about all the drivers I’ve known. How diverse they have been, how far they have traveled to pursue their dreams and the sacrifice it takes to get there. There’s a common thread that binds them all together. It’s not necessarily talent, it definitely isn’t money. It’s passion and love for the sport. The desire to not only compete but to put on a good show while doing it. Even out here, a million miles from nowhere, that rings true.

BATTLE AT THE BORDER TICKETS