CHASED TO PERFECTION: Junghans Breaks Through in Mid-Season Form to Win at Red Cedar 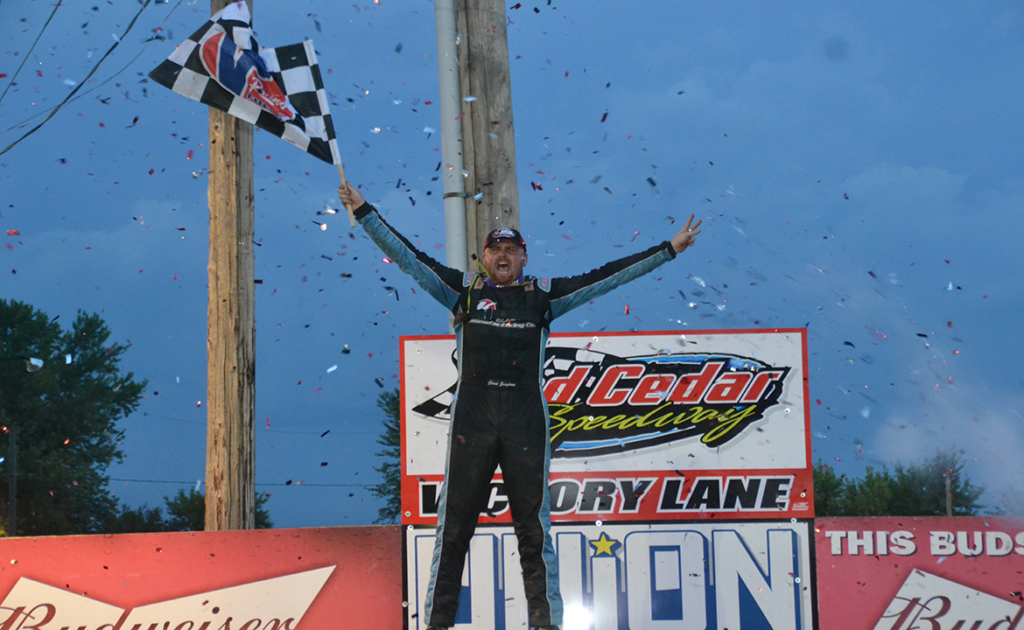 The last time the World of Outlaws Morton Buildings Late Model Series saw Chase Junghans in Victory Lane, a shortage of confetti in the cannon put a minor damper on his glorious moment in the winner’s circle. But after the checkered flag dropped in Sunday’s Series debut at Red Cedar Speedway, Junghans had never been happier to climb atop his ShopQuik Convenience Stores Rocket Chassis to a big confetti shower after driving away from Shane Clanton and Ricky Weiss to pick up his first victory of the season.

“We’ve been close all year,” a tired, but smiling Junghans said after the race. “We just finally got to put a complete night together.”

And what a complete night it was for the driver from Manhattan, Kansas. Picking up the win in Drydene Heat race number two, Junghans redrew the pole, took the lead from Clanton on the very first lap and never broke his concentration once throughout the 50 laps he led. Not even a late-race caution that re-stacked the field and put 13-time winner Brandon Sheppard on his rear bumper could shake his poise out front.

For 21 straight laps, Sheppard chased Junghans through lapped traffic, pressuring him to make a mistake on the top side. But that mistake never came, and Sheppard faded back a bit as the laps clicked off. Junghans was flawless.

“I only saw the [Rocket] 1 car one time out of the corner of my eye,” Junghans said. “But those guys are damn good, and it feels really good to beat them. They’ll be on their A-game when we start racing again, so we’ve just got to keep our heads down and keep on chugging along.”

Junghans spent almost the entire race on the high side, leaning on the cushion in every corner. Nobody seemed to be able to work the top groove quite like he did or use it to get through several packs of lapped traffic in the way that he made it work. The race’s only caution didn’t come until lap 40, and Junghans found himself in lapped traffic by lap 10.

“There were lapped cars left and right, and I was trying to look at my crew guy to see how big of lead I had at one point,” he said. “But when you’re on the top and you’re bouncing off that cushion, it’s hard to be consistent. But this car was phenomenal tonight.”

Multiple times, Junghans drove it a bit deeper into the corner and switched to the bottom lane to get around traffic racing in his way on the high side, even threading the needle in between a pair of slower cars to make the move at one point. With the competition that he knew was behind him, Junghans had zero time to waste.

“With any of these races today, you have got to go,” he said. “You can’t hesitate. At one point, I was thinking ‘I need to save tires,’ but once that caution came out, I started weaving to keep heat in them, and they felt good. We restarted well, and it was all over by then.”

Overall, a stellar performance by the entire team. It’s not always easy to come into a new track and find success right out of the gate, and what a statement win they made on Sunday night in their 3rd trip to World of Outlaws Victory Lane and first since Eriez Speedway last August.

“There’s a bunch more we can do to make this thing even faster, so I think we’re going in the right direction,” Junghans said.

Make it four-straight top-fives now for Shane Clanton, crossing the line in second on Sunday night. Starting on the pole, he was unable to contain Junghans at the drop of the green but held it in the top three all race long and backed up his Saturday night victory with another spot on the podium.

Using that bottom lane, much like he did in his victory at Ogilvie the night before, “The Georgia Bulldog” swiftly made his passes in lapped traffic to keep a steady pace behind the other two leaders. But it was the middle groove on the lap 40 restart that did the trick to get around Sheppard. His only regret was not freeing up the setup a bit more before the Morton Buildings Feature.

“We were a little tight,” Clanton said. “We tightened it up a little too much, thinking that it was going to be slick all over. We were just a little too tight across the middle to get to the traction on the bottom that we needed to run with [Junghans].”

Even though the setup wasn’t exactly where he wanted it, Clanton and his new team once again showed just how quickly they’ve settled in together and a sign of things to come with yet another podium finish.

“I’ve got good help, that’s the good thing,” Clanton said of his Skyline Motorsports crew. “I don’t have to worry about working on my car, I can tune on the racecar. When you can tune on the car, you can make things happen.”

It might not have been that pesky first World of Outlaws win that he was looking for, but Ricky Weiss’s hot streak is certainly alive and well after his third-place effort on Sunday night.

Weiss ran comfortably in fourth for 31 laps of the race and used the restart opportunity on lap 40 to pull the trigger on a slidejob for third underneath Sheppard coming out of turn four. His tires, still with grip in them, unlike the night prior, fired off on the restart well and he was able to gain the extra spot.

“We’ve had some issues with our tires sealing up the last few nights,” Weiss said. “But we tried something different and it definitely helped.”

The Outlaws will get a 9-day break from competition before the next show at the 1/2-mile Davenport Speedway in Iowa on July 24. Then, just two days later, Fairbury Speedway will host the World of Outlaws in the 30th edition of the Prairie Dirt Classic, presented by Bank of Pontiac on July 26-27!