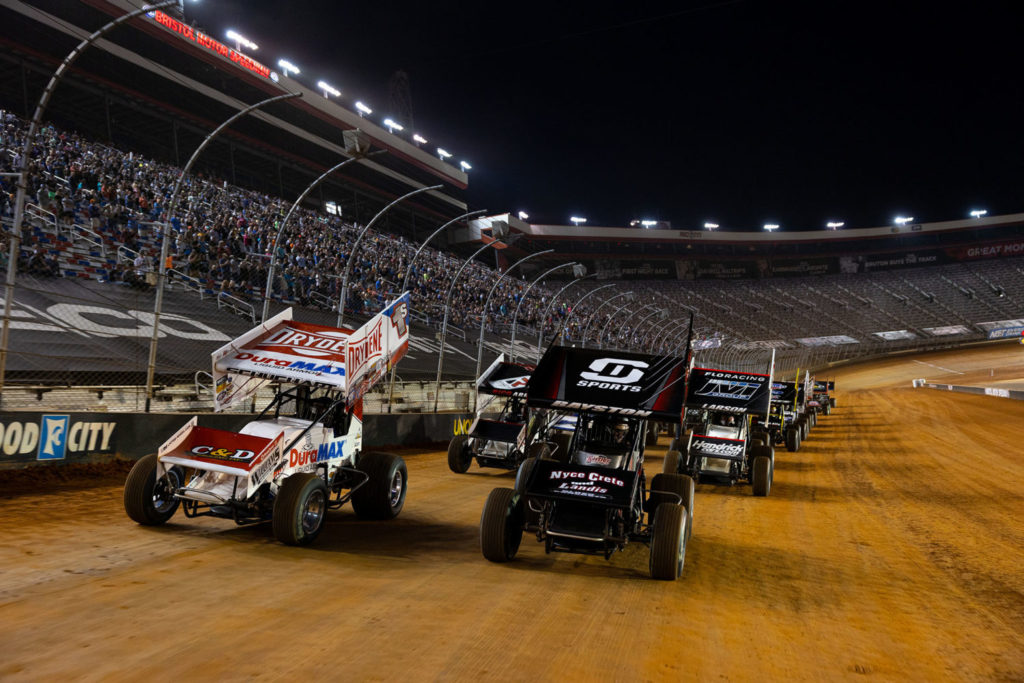 Only Appearance in New Jersey, First of 10 Races in Ohio

The Greatest Show on Dirt is staying busy this week with a three-race stretch over five nights in two different states.

New Jersey will welcome the World of Outlaws NOS Energy Drink Sprint Cars for the first and only time this season with Tuesday’s trip to Bridgeport Motorsports Park in Swedeboro, NJ. After that, the weekend brings the Series to Ohio with Attica Raceway Park and Sharon Speedway each hosting their first of two races in 2022.

Here are some of the top storylines to follow on DIRTVision.com:

DON’T MISS OUT: Tuesday’s show at Bridgeport Motorsports Park is the Series’ only appearance in The Garden State in 2022. It’s the second race at Bridgeport’s reconfigured 4/10-mile oval, but the ninth appearance overall at the Swedesboro, NJ facility. Along with New Egypt Speedway (9 appearances) and Flemington Speedway (3 races), Bridgeport is the third track in the state of New Jersey to host the World of Outlaws. Get your tickets now and don’t miss out on The Greatest Show on Dirt.

HERO TO ZERO: A few gallons of fuel and a mere five pounds is what gave us the biggest swing in the championship standings on Saturday when Carson Macedo rolled across the scales light. He crossed the line in second at Williams Grove, but the Jason Johnson Racing, Albaugh #41 failed to meet the minimum weight requirement and suffered a disqualification to the tail of the finish. The consequence sent Macedo from +4 points with control of the title lead to down -42 points and forced to claw back to the top.

On the bright side, the 25-year-old native of Lemoore, CA native is ready to rebound at three solid tracks this week. He was a winning contender last year at Bridgeport, owns an All Stars win at Attica, and has collected three total podiums at Sharon.

POSSE INVASION: The World of Outlaws / PA Posse rivalry is deadlocked at 1-1, but the battle isn’t over yet. Tuesday’s trip across the border into New Jersey is just close enough to convince some drivers to leave the porch and chase the loot at Bridgeport.

Brent Marks of Myerstown, PA banked $17,500 in Saturday’s Morgan Cup at Williams Grove, and now eyes his third World of Outlaws win of 2022 at Bridgeport. He was in dominant control of an April 410 race at the track prior to a mechanical issue stealing the win away. Another win would make him the 48th driver in Series history to reach 10+ career victories.

Anthony Macri of Dillsburg, PA continues to inch closer and closer to that elusive first-career World of Outlaws win. He led laps at Lincoln last Wednesday and now returns to Bridgeport this Tuesday, where he finished third against the Series last year and won at this year in April.

THE BUCKEYE BULLET: The last visit to Sharon Speedway by the World of Outlaws in May 2021 was one that sent not only the Sprint Car community, but the entire racing world into a frenzy. At 58 years old, Dave Blaney made history with his first World of Outlaws win since 1997, bringing the former Series champion up to 95 career wins.

To make the win even sweeter, it came in the form of a last lap pass over Sheldon Haudenschild. The victory was easily one of the most popular of the entire season, and creating tons of buzz with fans hopeful for a repeat as the Series returns to the Blaney-owned track this weekend.

ROOKIE ON A ROLL: With 20% of the season completed, Spencer Bayston of Lebanon, IN has used a career-best streak to keep his name in championship contention (-132 PTS), let alone as the runaway leader for Kevin Gobrecht Rookie of the Year. The 23-year-old pilot of the CJB Motorsports, Signing Day Sports #5 is riding a Series-best streak of 10 consecutive top-10 finishes with a Series-best average finish of 5.7.

Bayston will encounter New Jersey’s Bridgeport for the first time on Tuesday night, but can rely on the experience of veteran crew chief Barry Jackson to ease the learning curve. In Ohio, he’ll head for two of his best tracks with Attica and Sharon both being venues where he’s won before in All Star Circuit of Champions competition.

SHARK SUCCESS: From last week to last year, the success of both Shark Racing teams is evident and brewing with more potential this week. Jacob Allen continues to prove the Pells Tire Service #1A is one of the fastest cars on tour by leading the Series in qualifying average (6.29), Heat Race wins (8), and Dash Appearances (13). The Hanover, PA native scored a storybook win at Lincoln (PA) last Wednesday and was only two laps away from sweeping the week when he ran out of fuel at Williams Grove (PA).

His teammate Logan Schuchart enters as the defending World of Outlaws winner at Bridgeport, topping last year’s show aboard the DuraMAX Oil, Team Drydene #1S. He’s used a consistent stretch to rally to fifth in points, only -102 points behind and still in contention for the season-long championship.

HOMEBOUND: Sheldon Haudenschild of Wooster, OH will enjoy the first of 10 home state races this weekend when the Series visits Attica Raceway Park and Sharon Speedway. He’s won at both tracks with the All Star Circuit of Champions but still chases his first World of Outlaws win at either of them following several close calls, including last year when he led more than half of both races.

The Wild Child’s boy has earned two of his 24 career victories in Ohio with wins at Eldora and Wayne County to his credit. He’ll enter the three-race week with the momentum of a runner-up result at Williams Grove, his first podium finish in almost a month.

TAKING NOTES: Both weekend facilities will be hosting their first of two World of Outlaws Sprint Car races this season, meaning a valuable learning opportunity lies ahead for drivers and teams. Following Friday, the Series will return to Attica Raceway Park on Tuesday, July 12 for the $15,000-to-win Brad Doty Classic. After Saturday, the Outlaws will come back to Sharon Speedway on Saturday, September 24.

Tuesday, May 17 at Bridgeport Motorsports Park in Swedesboro, NJ
Friday, May 20 at Attica Raceway Park in Attica, OH
Saturday, May 21 at Sharon Speedway in Hartford, OH