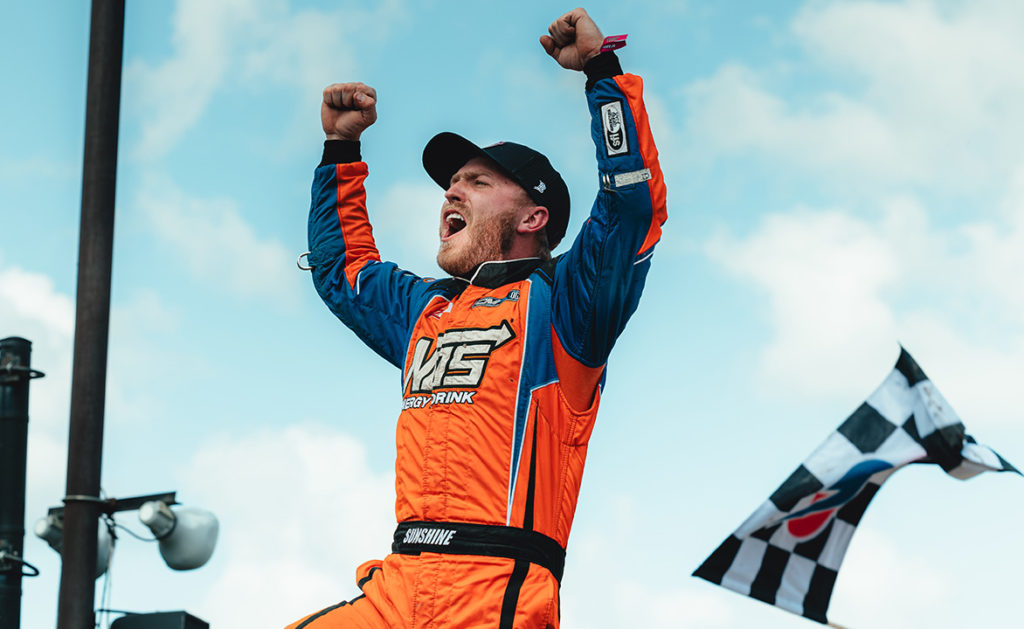 The crown’s gems gleamed from the sun. Not from the giant star in the sky above. From the emotional rising star it rested upon.

“I don’t even know how to describe it really,” Courtney sputtered out while searching for a word. “Excitement… Excitement is probably the best. I saw everyone stand up and that’s something you dream about as a kid. I’ve watched a lot of these races as a kid. Seen all the crowds go crazy when people like this win. You never think in your dreams it is going to be you. Not very often does it actually happen.

“It really sank in once we cleared the scales and went back through the pit gate there and the crowd cheered again… that really got me. That got my tears flowing again. I had to soak them back in when I got on top of that win.”

The win at Eldora Speedway was not only his first Kings Royal victory, and his first World of Outlaws NOS Energy Drink Sprint Car Series win, it was his first-ever appearance at the Kings Royal. It was also his 10th win overall at the “Big E.”

To Courtney, nothing in his career compares to being king.

The 38th Kings Royal was set to take place on Thursday evening, and while Qualifying and one Heat Race was completed, rain forced the remainder of the program to Saturday afternoon – giving one driver the opportunity to potentially win two Kings Royals in one day and an incredible payday of $350,000.

Courtney set the stage early for his future glory with a fifth-place qualifying effort. He then won the fifth Heat Race on Saturday, giving him the outside pole for the start of the Feature.

When the green unfolded in the humid air to commence the historic day, Courtney powered his NOS Energy Drink #7BC around the outside of polesitter Justin Peck to take the lead on the opening lap. Behind him, 36th Kings Royal winner Brad Sweet made quick work of David Gravel and Peck to take second down the backstretch. A red flag in that first lap hindered both of their strong starts, though.

However, even with them having to return to their original starting positions due to a complete restart, Courtney and Sweet put their moves on replay by claiming first and second, again, in the same fashion as before.

Sweet, eager to sit on the throne for the third time in his career, slid Courtney for the lead on Lap 2 and pulled away. Daryn Pittman was also on a charge behind them, making his way from sixth to third.

The top-three acted like an accordion for the first 20 laps. Courtney closed on Sweet when they hit lap traffic, but then would fade when he neared his bumper. Pittman struggled with the same results when trying to run down Courtney. In that time, rubber started to lay down on the track.

With 21 laps to go, a caution flew for Lachlan McHugh slowing on track with a flat right rear tire. As the field made laps, word came over the radio that Sweet had a cut right rear tire. The NAPA Auto Parts #49 charged into the pit area for his team to put a new right rear tire on his machine. Sweet’s chance at another Kings Royal victory deflated at that moment. He had to settle for a ninth-place result.

His misfortune handed Courtney the chance of a lifetime. The chance at a dream. He led the field to the green on the restart with Gravel in second. Danny Dietrich, who was on a charge to the front before the halfway caution, stole third from Pittman that lap.

Running the high side of the half-mile track, the top-three continued the accordion dance. Gravel closed on Courtney and then fell. Dietrich closed on Gravel, even close enough to try and make a pass, but never enough and fell.

With only two laps standing between one driver and a $175,000 payday, Gravel made a charge to the outside of Courtney in Turn 3 but couldn’t slide his way by. His move gave Courtney an unneeded scare, though.

“I had no idea,” Courtney said about how close Gravel got. “I knew he got to the outside of him in Turn 3 and knew I needed to pick it up a little bit. But I was still running pretty slow, just to make it (not blow a tire). I hadn’t gotten any tire shake, so I knew it was in good shape, well better shape than I thought, and had enough to finish the race.”

He brought the crowd to their feet as he eased his throttle down the front stretch for the final time with the checkered flag waving.

Gravel crossed the line second but was light at the scales and disqualified – ending the day 24th. His disqualification moved Pittman to second and Dietrich to third.

“It’s a great finish for us,” said Pittman, who made his fourth World of Outlaws appearance of 2021 in the Swindell Speedlab #39. “Kevin (Swindell) has done a great job. Our whole crew has been working hard. We haven’t raced a lot, but to come out of here with a third place, obviously, a crown jewel in the sport is nothing to hang our heads over. We’ll just go and try to tweak on it a little bit more.”

For Dietrich, he said he needed Gravel and Courtney to take each other out to win… with a chuckle after.

“It was so hard to pass,” Dietrich said. “I think you saw where I tried to pull the trigger on David but as soon as you moved down it seemed like you just slid through the rubber and killed your exit speed. I don’t know if I could’ve done anything with them. I pulled the wing back hoping they would get to racing each other really hard and push each other out of the rubber and take advantage of it. But it never got to that point.”

Sitting in the media center with his crown at his side, Courtney was physically there but his mind was elsewhere. He wore his smile. He spoke his words. But he was clearly living in his dream.

“This is insane,” Courtney exclaimed.

UP NEXT: The World of Outlaws NOS Energy Drink Sprint Cars return to Eldora Speedway at 7 p.m. today, starting with Hot Laps, for the 37th Kings Royal. Drivers will compete for another $175,000 top prize.

ALL DIRT ROADS: The Dirt Track at Charlotte Set for Mega World Finals on Nov. 4-6