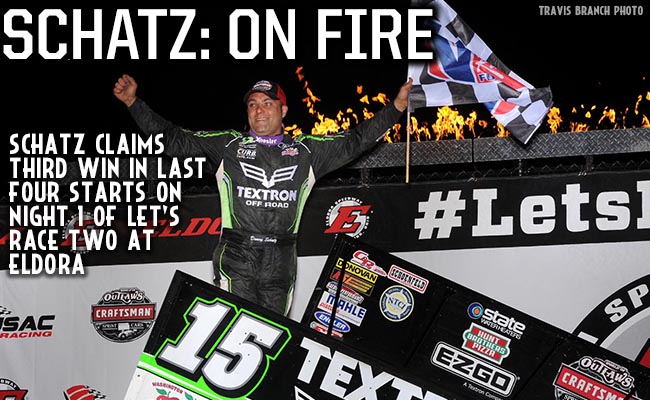 ROSSBURG, OH – May 11, 2018 – Donny Schatz inherited the lead on Lap 14 and held off a late race charge from Logan Schuchart to claim the victory on the opening night of the Let’s Race Two weekend at Eldora Speedway. It was Schatz’ 7th win of the 2018, extending his point lead atop the World of Outlaws Craftsman Sprint Car Series Point Standings. Schuchart finished second with Brad Sweet finishing third.

Ohio native Cole Duncan set fast time over the 37-car field, won his heat race and was victorious in the Sears Craftsman Dash to earn the pole for the 30-lap Feature. Duncan, in search of his first career World of Outlaws Craftsman Sprint Car Series victory, shared the front row with legend and fellow Buckeye Jac Haudenschild, who was seeking his 74th career Outlaw victory.

It was Haudenschild getting the jump at the tip of the Green and leading the opening circuit. Third-starting Donny Schatz swooped underneath Duncan to take second the following lap. Haudenschild, or more often referred to as ‘The Wild Child’, lived up to his nickname every bit as he flirted with the dangerous cushion and was up against the wall fending off Schatz narrowly at the line for the first five laps in exciting fashion.

A Lap 6 caution for Hunter Schuerenberg halted the action and bunched the field together. On the restart, Schatz, on the bottom, remained right with Haudenschild, but this time sixth-starting Aaron Reutzel was right in tow. The trio sliced and diced their way as they battled for the lead, utilizing every inch of the Eldora Speedway racing surface.

On Lap 11, Reutzel made an eye-catching move going around the nine-time Series Champion before going wheel-to-wheel with Haudenschild and pulling even with The Wild Child on the front stretch, trailing him by .005 at the conclusion of the 11th circuit. Reutzel would take command of the field on Lap 12.

Schatz continued to jockey with Haudenschild, which allowed Reutzel, who scored his first career Outlaw win earlier this season at Tulare, to put a couple car-lengths between himself and Schatz and Haudenschild. Schatz finally wrestled the runner-up spot away from Haudenschild on Lap 13 and set his eyes on the Texas native for the lead on what promised to be a great battle.

Disaster struck for Reutzel on Lap 14, as he bobbled just enough on the thin Eldora Speedway cushion to lose the handle on his No.87, before making heavy contact with the outside retaining wall, ending his night. Schatz and Haudenschild both showed their veteran prowess avoiding Reutzel’s ailing machine as it bounced back into the racing line. Reutzel was uninjured in the accident and expressed his apologies to his race team stating the dangerous Eldora cushion got the better of him tonight.

One lap later, David Gravel was left nowhere to go and spun in turn two, creating a logjam that included Carson Macedo, Rico Abreu and Joey Saldana. Gravel and Abreu were able to make repairs, but Macedo and Saldana’s nights both came to an end.

The action remained intense on the restart as cars scattered around the Eldora racing surface. Brad Sweet had an excellent restart and moved into the runner-up position and nearly completed a slider on Schatz for the lead, to no avail as the Fargo, ND native powered around Sweet on the cushion.

Eighth-starting Logan Schuchart began making the bottom work and took the runner-up spot away from Sweet with eight laps remaining. Schuchart closed in on Schatz, who made a daring move splitting lapped cars, to extend the lead once again just as Schuchart was preparing to bid for the lead. Schuchart, who won during last year’s Let’s Race Two event at Eldora, closed in one last time with two laps remaining, but Schatz was too strong and took the checkered flag 1.041 seconds in front of the Hanover, PA native with Sweet completing the podium.

“I had a good car, we played around a little and tried something different, but this team just continues to work. We probably weren’t the best car tonight, but we are here standing with the checkered flag,” Schatz said in Victory Lane. When asked about Reutzel’s move for the lead and crash, Schatz said, “He was really fast, but he wore it out. That’s the big part of racing with the World of Outlaws. You’ve got to finish races to win the Championship and sometimes you can’t go as hard to make sure you finish these races.

Schatz also praised the Eldora Speedway track crew, “Everyone has a different perspective of what is a good race or not. There were multiple grooves and guys were making moves all over the place and that’s really all you can ask for.”

Jac Haudenschild settled for fourth with Duncan completing the top five. Gary Taylor, who was as high as second at one point, faded late to sixth. Sheldon Haudenschild came forward to seventh with 14th-starting Jason Johnson, 26th-starting Daryn Pittman and Kerry Madsen completing the top ten. Pittman’s effort was good enough to earn KSE Hard Charger honors, advancing 17 positions. Brady Bacon was the lone driver to compete in both portions of the Let’s Race Two. Bacon was victorious with USAC by nearly five seconds and finished 16th with the wing on in the Feature.

The Let’s Race Two weekend at Eldora Speedway wraps up tomorrow night Saturday, May 12. If you can’t make it to the track, be sure to catch all the action live on DIRTVision.com!

Abbreviated Results from Eldora Speedway: May 11, 2018