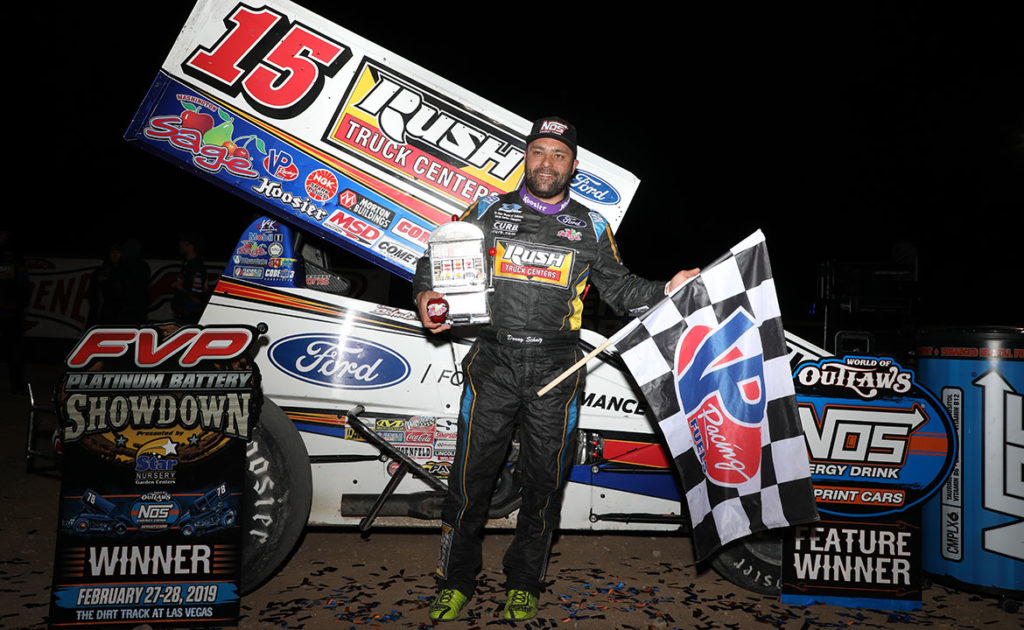 LAS VEGAS, NV – The final night of racing at The Dirt Track at Las Vegas was Donny Schatz’s to lose. He was hundredths of a second away from winning his Heat race, he won the DIRTVision Fast Pass Dash, and he pulled away with the lead at the start of the Feature in front of thousands that came to see a historic night of racing that paired the World of Outlaws NOS Energy Drink Sprint Car Series with the NASCAR K&N Pro Series West.

But on lap 14 he lost it. Series points leader Daryn Pittman had inched closer and closer to Schatz every lap, eventually finding grip in the middle of the track and darting by him.

He stretched the lead of the FVP Platinum Battery Showdown presented Star Nursery between he and Schatz to about a straightaway’s length. Even with multiple cautions and an Open Red, allowing teams to refuel their car, Pittman never fluttered, always knowing where to find grip on the rubbered down track, gradually moving from the top of the track at the beginning of the race to the bottom of the track by the end. The race was then his to lose.

And on the final lap of the race, he lost it. Blocked by a slower lap car – a situation Pittman used to his advantage to win his first race of the season – Schatz took advantage of a clear opening on the high side of the track to get his Tony Stewart Racing car back by Pittman and then held him off to claim a victory he thought he had lost.

“I didn’t think we’d get him (Pittman),” said 10-time Series Champion Schatz. “But we hit traffic on the last corner. He went there (low), and I was going the other place. It was either win it or wear it, and lucky we won it.”

Lady Luck was good to Schatz. Not only did he find luck in lap traffic, he found luck in his tires holding on until the end of the 30-lap Feature, extended by multiple cautions – as his right rear tire could have been mistaken for a slick stock car tire by the end of the race. Pittman cited drivers’ fear of blowing a tire is why he caught lap traffic in five laps after a late race caution, leading to him losing the race.

“We were lapping really good cars. The problem was everybody’s pace was off, because I think everybody was afraid of blowing tires,” Pittman said. “They were just going slower than I thought they would. Honestly if I could have replayed it, I probably would have just slowed down from the time we went green with five to go.”

However, Pittman acknowledged he couldn’t slow down too much because Schatz “will blow his tire trying to win a race and not think twice about it.”

The victory is Schatz’s 13th win at The Dirt Track at Las Vegas and his 284th World of Outlaws NOS Energy Drink Sprint Car Series victory. He went winless in the first three races of the season for the first time since 2013 – a stat he laughed off, but is glad to get past.

Looking to spoil the Schatz and Pittman battle for the lead, which ended with a 0.071-sec. gap, was third place finisher Logan Schuchart. He quietly worked his way through the field, from 10th, getting to third by lap 13. He stalked the two Series champions throughout the race, staying close enough to pounce if one bobbled, but neither did.

“I thought I might have a shot right there at the end with both of them,” Schuchart said. “But these guys are World of Outlaws champions. They’re going to be tough to beat and they’re not going to make many mistakes.”

He too was worried about his tires at the end of the race, stating he slowed his pace a little to not blow one.

Tires plagued Cory Eliason’s night with his right rear tire blowing in the closing laps of the race, but he still managed to be the KSE Hard Charger for the second night in a row. He finished 13th after starting 24th.

While Schatz claimed the victory at the FVP Platinum Battery Showdown, Pittman remains the points leader – by just four points over Schatz.

World of Outlaws NOS Energy Drink Sprint Car Series actions resumes March 8-9 at Thunderbowl Raceway in Tulare, CA. As always, you can catch all the action on DIRTVision.com.

Donny Schatz’s last lap pass to claim his 284th win came on an historic night for the World of Outlaws NOS Energy Drink Car Series. For the first time, the World of Outlaws and the NASCAR K&N Pro Series West were paired together for a thrilling night of racing at The Dirt Track at Las Vegas.

It was an event that drew a crowd of thousands in the stands and attracted a wide range of media attention.

“I’m glad to see a lot of the NASCAR fans here,” Schatz said. “We met a lot of NASCAR people the last couple of days, people who have never seen a Sprint Car before. So hopefully it opens their eyes to new things.”

Echoing the heart-pounding finish to the World of Outlaws race, the NASCAR K&N Pro Series West put on an equally exciting show, with rising NASCAR star Hailie Deegan making a last lap pass for the win in the 100-lap Star Nursery 100. While the 17-year-old is paving a bright future for herself in NASCAR, she couldn’t help but be drawn to the “gnarly” Sprint Cars.

“It’s sick,” Deegan said about NASCAR racing with the World of Outlaws Sprint Cars. “At Volusia (Speedway Park) was the first time I saw Outlaw racing, and man, I wanted to get into a car so bad… I think coming out here with the Sprint Cars definitely made for a good show.”