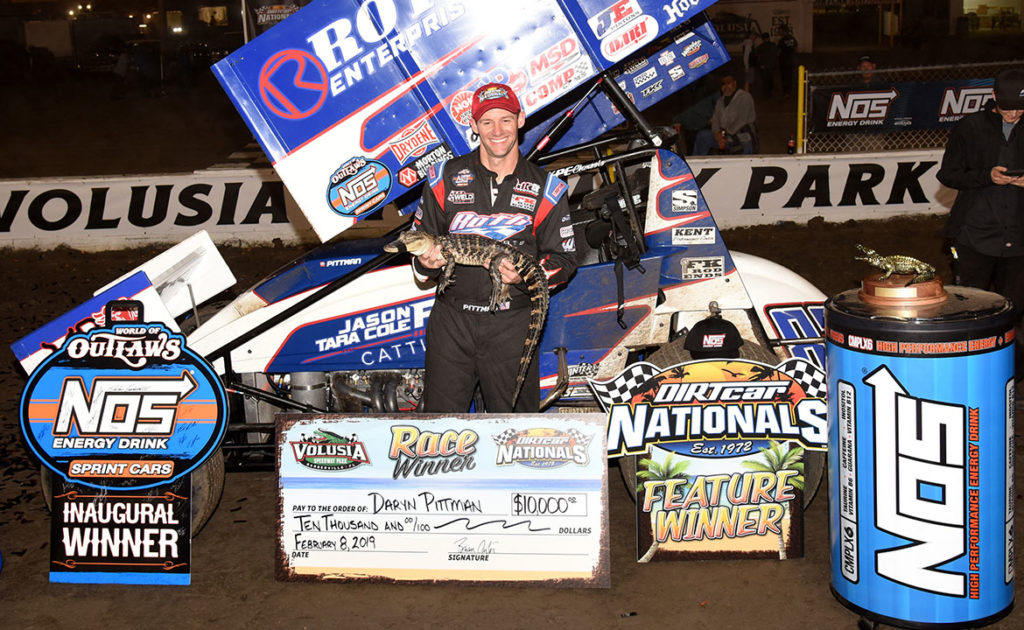 BARBERVILLE, FL – One of Daryn Pittman’s favorite drivers growing up was Stevie Smith. By capturing his 83rd win – in the 83 car – during the second night of World of Outlaws NOS Energy Drink Sprint Car Series action at the DIRTcar Nationals he is now just one win away from tying his childhood hero.

“Just that number (83 wins) to me is pretty staggering,” Pittman said after winning his second race in a row at Volusia Speedway Park. To him, it’s surreal he would ever get close to Smith’s record.

He cruised to win number 82 Friday night, making each pass with ease on the bottom of the track. Win 83 wasn’t as easy. NASCAR Xfinity Series star Christopher Bell made sure of it.

Bell pulled to the lead at the start of the race and held it until lap 18 when Pittman’s quest for the top spot finally reached the No. 39 Swindell SpeedLab car. The two traded the lead five times – three times in the last five laps.

By the time Bell and Pittman began battling for the lead, lapped traffic came into play. The slower cars worked in Pittman’s favor Friday night, as leader Shane Stewart got hung up behind one, allowing Pittman to shoot by.

They weren’t an issue for Bell, maneuvering around them like an obstacle course he designed. If Pittman wanted the win, he had to outpower Bell without help.

Pittman was able to make the bottom of the track work for him early, clearing Bell on lap 19. But Bell fought back, reclaiming the lead just a lap later. Pittman was forced to regroup and try another method of catching Bell and getting back by him.

It took six laps to do so, using the high side and middle of the track as his path back to Bell’s bumper. Pittman was able to again clear him for the lead, but Bell was resilient, throwing his car to the bottom of turn one and again reclaiming the lead.

After trading slide jobs in the last five laps of the race, by lap 28 the No. 83 Roth Motorsports car finally found enough grip on the high side of turns one and two to clear Bell and pull away. However, he didn’t know he created gap between himself and Bell.

“As a driver I felt like once I got the lead that should have been the end of it, because I felt like my car was better, so once I gave it back, I thought I might be in trouble,” Pittman said. “Honestly I thought he passed me back on the last lap. I thought I gave the race away because I completely missed the bottom on the white flag lap, and I guess it was a lapped car.”

While Bell is happy with the speed he’s shown this week, finishing third in Friday’s Feature and winning Saturday night’s DIRTVision Fast Pass Dash, he’s left wondering what he could have done better.

“Most of the time, I feel like in winged cars, especially on half miles, you get beat in lapped traffic,” Bell said. “In this scenario, I didn’t really get beat in lap traffic. He (Pittman) was obviously better than me, somehow, some way, so just go back and watch what he was doing to make up time on me. It sucks because most of the time you don’t get beat in an open track like that.”

Pittman credits some of the early success his team has shown to the ideas his Crew Chief Brent Ventura has provided, and that he has more say with adjustments than he did with the No. 9 Kasey Kahne Racing car. While he is coming off two wins in a row, Pittman is not taking his latest wins for granted.

“Every win is special,” Pittman said. “Eighty-two is great. Eighty-three is awesome. You never know when your last one is going to be. We’ll enjoy this one, and hopefully we have a lot more left in us.”