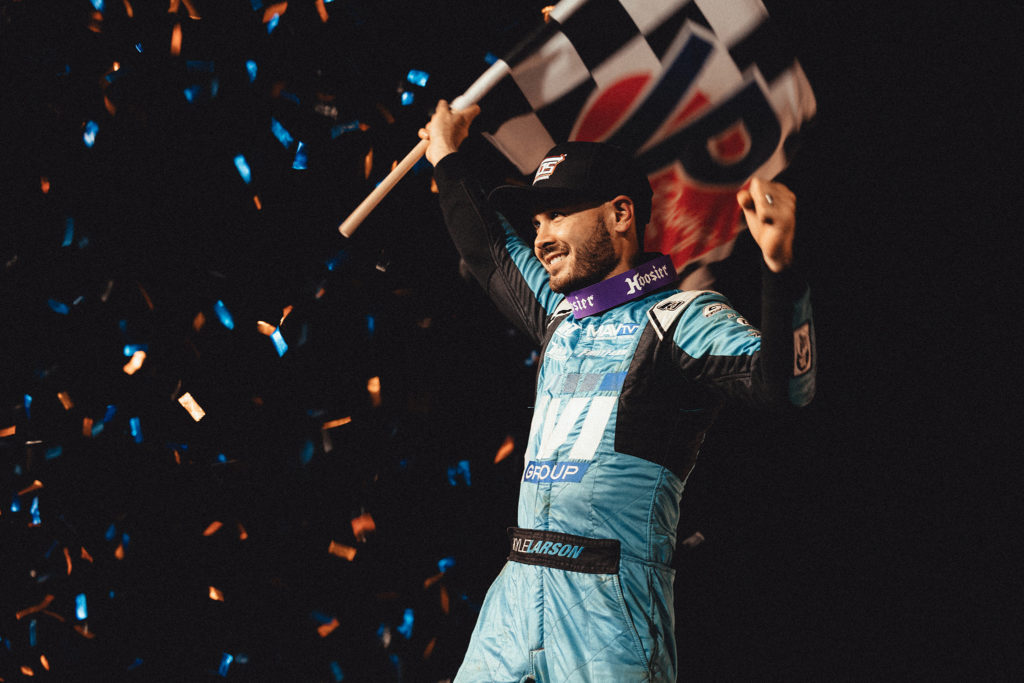 It’s been seven weeks since Kyle Larson last raced a Sprint Car, but that didn’t matter.

On Friday at Williams Grove Speedway, the Elk Grove, CA superstar picked up right where he left off in August: in victory lane.

His pursuit of the triple crown sweep, something that’s been done only twice in World of Outlaws NOS Energy Drink Sprint Car Series history, became more of a reality with a preliminary win at the 59th annual Champion Racing Oil National Open.

The Hendrick Cars #57 driver already won the Kings Royal in July, the Knoxville Nationals in August, and now eyes his first-career title at the $75,000-to-win National Open. If he can pull off the rare feat, he’ll stand alongside Doug Wolfgang (1985) and Donny Schatz (2007) as the only men in history to ever achieve the milestone.

However, Larson’s 24th career World of Outlaws win was arguably one of his least convincing in recent memory. The Paul Silva-owned entry had just about everything go right prior to Larson’s fourth-career win at the Mechanicsburg, PA 1/2-mile, and the 29-year-old ace knows they’ll have to step up for tomorrow’s 40-lap main event.

“We really just caught a lot of breaks all night,” Larson admitted afterward. “Didn’t qualify well, got a little lucky in the heat, and then the cautions fell at the right time in the Feature. Hopefully, we didn’t use up all of our luck before tomorrow. It’s been since Knoxville when I was last in a Sprint Car, I had to get used to how fast it felt again early in the night.”

After qualifying 14th in Flight A, “Yung Money” himself expected to miss the transfer position in the Drydene Heat Race. Lady Luck soon showed up, though, and Larson’s night turned around.

Two different cautions, including one for leader Danny Dietrich, moved the #57 up from seventh to second and sent him to the DIRTVision Fast Pass Dash. It was there he pulled the “1” and then won the six-lapper to secure pole position of the 25-lap Feature.

Untouchable in clean air, Larson’s kryptonite was lap traffic as fellow front-row starter Logan Schuchart reeled him in and battled for the lead each time the backmarkers neared.

Schuchart cleared a turn-one slider on Lap 17 and momentarily took the lead, but Larson crossed him back over as they sped under the backstretch bridge. An all-out war for the top spot was on the brink before the final caution flew and gave the leaders open-air with a handful of laps left.

From there, Larson cruised to a 0.905-second margin of victory in his fourth World of Outlaws win of the 2021 season.

“I started sniffing dirty air, it was getting dusty, hard to see the cushion, and I just got over it,” Larson spoke on his mistake. “Logan was good all night, so I wasn’t surprised to see him slide me down there. I knew I just had to make a couple of good decisions to hold the lead.”

“I didn’t think I would get the chance to come race here with the NASCAR Playoffs, but I’ve got a great team that allows me to chase an awesome goal,” Larson added. “It’s always fun to race here in Central PA, I would love to win this event tomorrow night.”

It was nearly the perfect storyline for second-place finisher Logan Schuchart. Donning a throwback to his grandfather Bobby Allen, the Hanover, PA native almost equaled him at 30 career World of Outlaws wins on his home turf in Pennsylvania’s biggest race of the year. The Shark Racing, Drydene #1S pilot gets another chance to make that history happen tomorrow night with more money on the line.

“I really think we were faster tonight,” Schuchart honestly observed. “We were catching him at the end and got by him at one point, we just needed it to stay green and race through traffic a bit. It feels good to run this well in our home town, our home race. Hopefully, we found something to go after that $75,000 tomorrow.”

Donny Schatz, the six-time and defending National Open champion, rounded out the podium with a solid third-place effort as his Tony Stewart/Curb-Agajanian Racing #15 crew threw some unique changes at the setup. It’s all in preparation to chase back-to-back $75,000 paydays tomorrow night at Williams Grove.

Anthony Macri of Dillsburg, PA continued his stellar stretch of results at the paperclip 1/2-mile by placing fourth in the #39M. The 2019 National Open champion and 2021 Summer Nationals winner, Brent Marks, closed out the top-five on Friday night.

UP NEXT: The World of Outlaws NOS Energy Drink Sprint Car Series will wrap up the 59th annual Champion Racing Oil National Open tomorrow night at Williams Grove Speedway with a $75,000-to-win main event. If you can’t be here in person, you can watch Every Lap LIVE on DIRTVision.