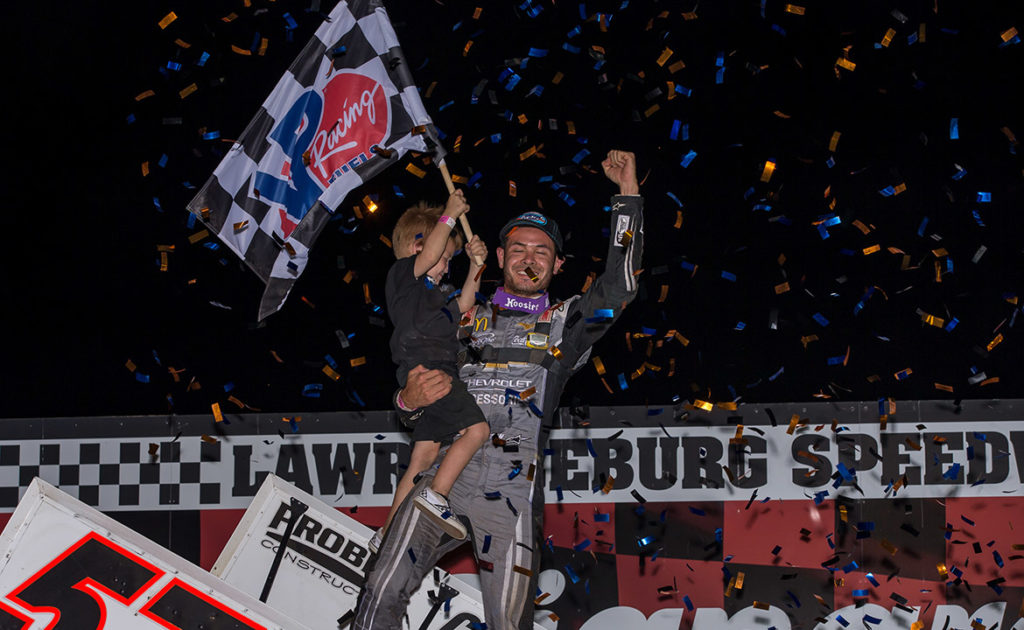 Kyle Larson versus Christopher Bell. It’s a tale that’s been told many times, in many ways.

But Larson’s World of Outlaws NOS Energy Drink Sprint Car Series victory Monday night at Lawrenceburg Speedway may be the most enticing tale of them, yet. And controversial.

The stage was set at the DIRTVision Fast Pass Dash draw. Larson drew the second-place starting spot. Bell drew the pole. Behind them, an abundance of fast World of Outlaws stars, such as two-time winner at the speedway, Shane Stewart, and 10-time Series champion Donny Schatz.

Bell dominated them all in the Dash. He was three-tenths of a second quicker than Larson and ended the eight-lap race more than two seconds in front of him. Larson’s runner-up finish placed the two NASCAR stars back on the front row for the 35-lap Feature.

This chapter of the tale usually ends in Bell’s favor, though. During the Turkey Night Classic midget race last year, Bell beat Larson for the second consecutive year. And earlier this year, Bell denied Larson his first Chili Bowl Nationals win by passing him late in the race to claim his third Chili Bowl win in-a-row.

Larson also had to cope with defeat during the first night of the World of Outlaws Patriot Nationals race at The Dirt Track at Charlotte on Friday. After dominating the majority of the Feature, a late race mistake allowed Giovanni Scelzi to slip by the 2019 NASCAR Cup Series $1 million All-Star winner and roll into Victory Lane.

Bell and Larson were hungry for another win.

However, Stewart looked to spoil the NASCAR party in the early stage of the race by charging to second on the first lap and keeping pace with Bell – making it an Oklahoma-native shootout at the front.

No one could touch Bell, though. Once the No. 39 Swindell SpeedLab car clicked off laps on the high side of the 12-degree banked track, he out paced Stewart every lap. Larson was mired in third-place watching another potential victory drive away.

However, cautions came to Larson’s rescue. With 19 laps to go, Sheldon Haudenschild spun directly in front of Bell, bringing out the second caution of the night – the first being early in the race for Spencer Bayston breaking a rear end.

On the restart, Larson rode the cushion through turns one and two and carried enough momentum to throw a slide job underneath Stewart the next corner. Coming off turn four, the two made contact. Both kept control of their car, but it was to the benefit of Larson. He secured second-place, while Stewart eventually faded to fourth-place after an intense battle with Schatz for third.

From there, Larson seemed destined for another runner-up finish. There was no catching Bell.

Then came Lap 27. Bell slid up into the cushion in turn two, throwing his 27 laps of domination out the window. In the second it took Bell to correct his car, the white No. 57 was there. Larson torpedoed his car underneath Bell in turn three and cleared him through the center of the turn.

Bell charged back, getting a run to the outside of Larson down the front stretch. This was it. This was the battle fans waited at the edge of their seat for.

Side by side going into turn one, both were committed to their line. Bell pressed to the cushion. Larson a lane below. The two were close enough to grab each other’s steering wheel. Then, those fans at the edge of their seat left them.

The hard racing between Larson and Bell resulted in the black No. 39 jumping the cushion and spinning through the air before tumbling to the center of the turn. Bell’s night was over.

“I’m not sure what happened into (turn) one there,” Larson said after the race. “He probably didn’t know exactly where I was going. He thought I might slide myself or what, and I think I just entered in a spot that put him in a bad spot and he probably got tight on the cushion.”

From Bell’s point of view, “I didn’t run him over, but I didn’t have an option.”

“My car was really fast,” a dejected Bell said. “The thing was the best I’ve ever been here, for sure. Thank you to Kevin and Jordan (Swindell) for allowing me to drive their car. So, bummer we didn’t win.”

Larson said he didn’t feel any contact between the two of them.

“It was unfortunate on his part to wreck,” Larson said. “It would have been a good battle for the fans, but at the same time it’s always nice when you don’t have to battle Chris for a win because he’s so good.”

There were still seven laps to go, and Larson now had Schatz and Scelzi lurking behind him. But once the race went back green, Larson put a period on the night charging to his seventh career Series win at the Memorial Day Spectacular presented by KOI Auto Parts.

“These Outlaw wins are so hard to win,” Larson said, while holding a new burgundy and gold trophy to add to his collection. “I mean, you’ve got Bell, leading, he’s one of, if not the best drivers in the country or in the world right now, in open wheel cars. And Donny Schatz (the Series’ points leader by 48 points), who’s arguably the best in winged sprint cars. So, to beat those two feels really cool.”

Larson versus Bell. It’s a tale that’s been told many times and will continue to be told for years to come.

This time, though, Larson won.

The World of Outlaws NOS Energy Drink Sprint Car Series will next make history by making its first trip to Nashville Fairgrounds Speedway for the inaugural Music City Outlaw Nationals on Friday, May 31, and Saturday, June 1.