KNIGHT OF ‘THE BIG E’: Donny Schatz wins at Eldora Speedway for third time this year 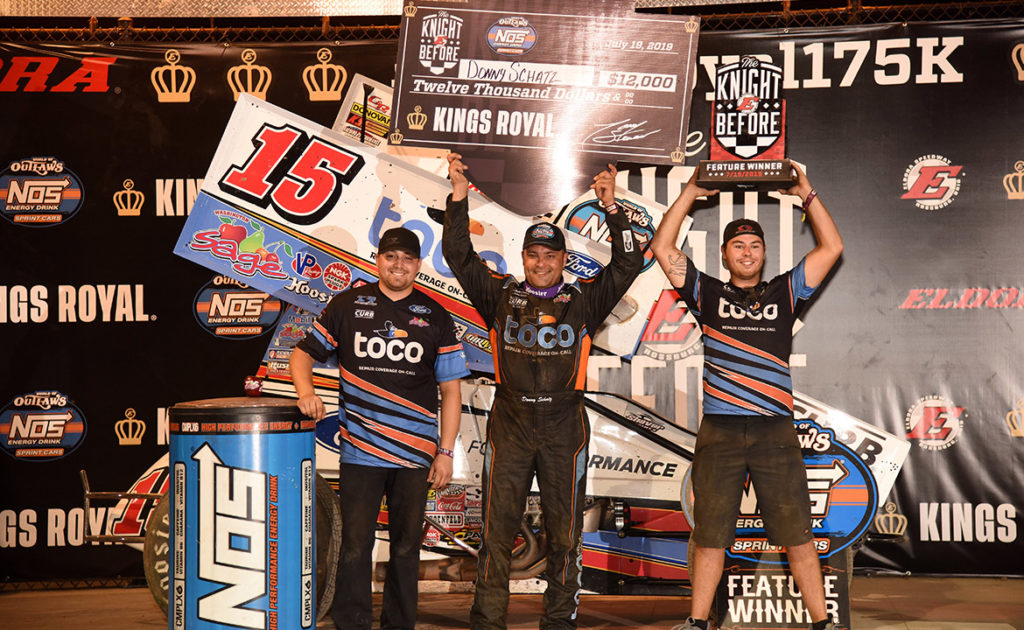 The duty of a knight is to protect their king and his castle.

“Eldora has always been really good to me,” said Schatz, who’s now won at the speedway 18 times and has an average finish of 1.25.

He led every lap of The Knight Before the Kings Royal 30-lap Feature, but his reign of the night wasn’t an easy task.

Hunting the 10-time Series champion all night was a fierce David Gravel. Coming off two podium finishes in-a-row at Eldora, the Jason Johnson Racing driver was eager to claim his third victory at the speedway – his last coming in 2016.

Schatz, of Fargo, N.D., started on the pole for the Feature – a virtue of winning the first DIRTVision Fast Pass Dash; Daryn Pittman, of Owasso, Okla., won the second Dash and lined up on the outside pole. When the race went green, Schatz jumped to the lead and immediately began to put distance between he and Pittman.

The reigning champion had a horse capable of charging to the victory. However, 10 laps into the run, Pittman and third-place Gravel began reeling in Schatz.

While Schatz rode the bottom lane, Pittman powered along the cushion – the same line Brad Sweet used to win at Eldora the night before. The Roth Motorsports No. 83 had a run brewing to challenge for the lead. But while he tried to focus on catching Schatz, Gravel continued to poke his nose under Pittman lap by lap, looking to find enough grip on the bottom to make the pass for second.

With 19 laps to go Pittman came within feet of Schatz’s bumper going into turn one, but unlike the lap before Schatz chose the high line. That decision gave Schatz a strong enough run off turn two to put about a six-car length distance between he and Pittman. Then Gravel dove underneath him the next corner and took the position on the exit.

However, Pittman charged back, driving underneath the Watertown, Conn.-native down the front stretch and back by him into turn two. The next time into turn three Gravel mimicked his previous lap, again, diving underneath Pittman. This time it worked, though. He cleared him off the corner and maintained the position into turn one with 14 laps to go.

The hunt for Schatz was on. Lap after lap, running the bottom in turns one and two and the high side in turns three and four, the Mesilla Valley Transportation No. 41 crept closer and closer to the Toco Warranty No. 15 car.

Schatz said he and his team tried something new with the set up and while it worked in the Dash, he was just hanging on to his car throughout the Feature. He wouldn’t have been surprised if someone drove by him.

With 11 laps to go, Schatz went from a dot in Gravel’s line of sight to a boulder. But despite Gravel’s charge, Schatz’s proficiency with running the bottom of the speedway threw a shield in Gravel’s run. A few car lengths distance was as close as Gravel could bring his car to Schatz.

To beat Schatz, he was going to need help. With six laps to go, he got it in the form of lap traffic.

Twenty-third-place Parker Price-Miller gave the leader his biggest challenge of the night. Schatz attempted to pass the slower No. 71p car on the bottom through turns one and two – where he struggled to find grip all night – but Price-Miller charged back in front of him down the backstretch. Into turns three and four Schatz, again, tried to pass Price-Miller on the bottom and, again, failed.

“I could make good laps in (turns) three and four and hold my own, but in turns one and two, I was just… I got to lap traffic and watched the 71 car drive by me,” Schatz said. “I had to change everything I did. I was stomping and stabbing and slinging, doing everything I could. I just couldn’t make it do what I wanted it to do.”

Schatz’s battle with Price-Miller put Gravel a car length behind him.

With five laps to, Schatz launched underneath Price-Miller into turn one, finally able to make the pass. However, he lost traction off turn two, allowing Price-Miller to charge underneath the No. 15 car with Gravel following his trail.

Choosing the middle lane of the track in turn three, Schatz cleared Price-Miller and pulled away from him and Gravel, who had to make a split-second evasive maneuver around the slower Price-Miller into turn three.

Behind them, Pittman and Logan Schuchart traded slide jobs lap after lap for third-place.

While they battled for third, Schatz had pulled back to a comfortable half a straightaway lead over Gravel. He looked to be en route for another Eldora Speedway victory, but with three laps to go the caution came out for Cory Eliason, who spun on the backstretch.

Gravel was now close enough to reach out and touch Schatz’s bumper. When the race restart, Schatz chose the high line and Gravel launched his car to the bottom of the track in turn one, coming side-by-side with Schatz in the middle of the corner.

Schatz had the advantage, though, being able to carry the momentum of riding the high side down the backstretch, leaving Gravel to catch up.

The duo remained a few car lengths distance from one another the remaining two laps.

When the white flag was shown, Gravel made one last attempt at out dueling Schatz for the win by, again, diving underneath him in turn one. Like before, it wasn’t enough. Schatz had the run on the high side and carried it the remainder of the circuit to his sixth win of the season – 289th career World of Outlaws win overall.

“My dad always taught me to worry about what’s in front of me, not what’s behind me,” Schatz said. “It’s paid off this long in my career.”

Gravel picked up his sixth podium finish in-a-row, but he was left still hungry for more.

“I think we were good enough to win tonight,” Gravel said. “I wish the yellow didn’t come out. I liked the lap traffic. I had the shot to pass him (Schatz) that one time. I’m happy where we’re at, though. Just a touch off.”

Schuchart was able to make the pass on Pittman for third – collecting his third top-five in three races at Eldora Speedway.

“I just feel like we started too far back,” said Hanover, Pa.-native Schuchart, who started tenth. “I feel like we might have had one of the fastest cars. On the last restart a bolt came out of the wing there and let it go the whole way back, so I got real tight. Before that, I feel like I was running right with those guys.”

With Schatz’s win and Series points leader Sweet finishing seventh, the gap between them has shrunk to 20 points.

But right now, Schatz isn’t worried about points. He’s not even engrossed in his second win in two races at the speedway. He’s focused on Saturday’s $175,000-to-win Kings Royal.

“Everything is about tomorrow night,” said five-time Kings Royal winner Schatz. “The night is over. We’ll forget about it. It’s all about the Kings Royal now.”

There’s no points on the line. Just an unprecedented winning purse and the opportunity to go from a knight to a king.

The World of Outlaws NOS Energy Drink Sprint Car Series on Saturday, July 20, will return to Eldora Speedway in Rossburg, Ohio for the prestigious Kings Royal event. Get tickets and more information.