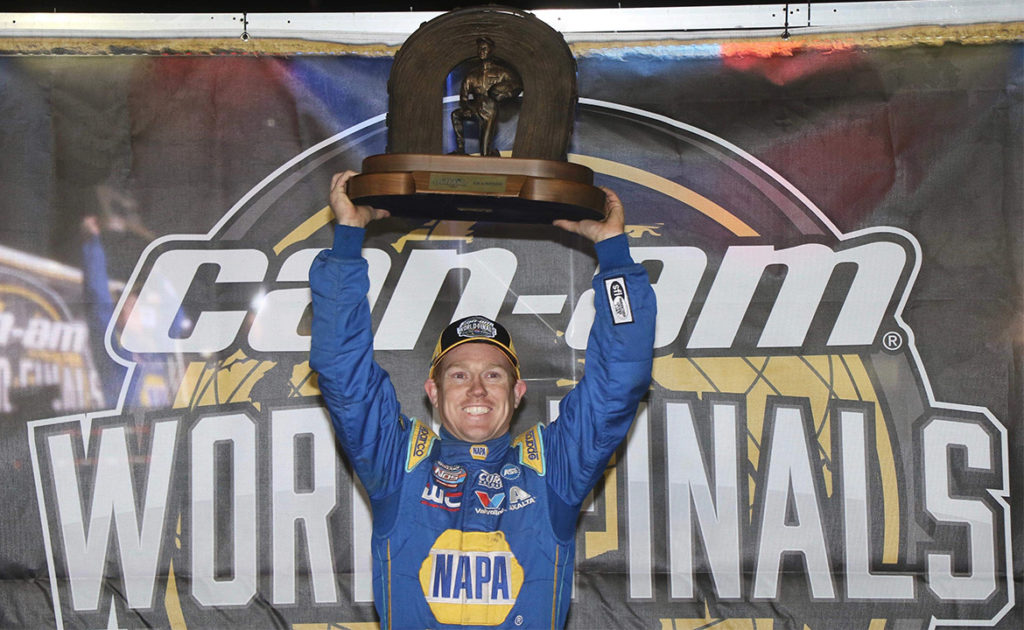 The air chilled your bones and froze your breath. The crowd of people multiplied every second, fighting over inches of space to snap the best picture. Sandwiched in the middle of it was Brad Sweet, who at that moment said he felt like he could finally relax.

Awaiting him on the front stretch of The Dirt Track at Charlotte Saturday night after his runner-up finish in the Can-Am World Finals was a stage and a bronze trophy to officially announce the Grass Valley, Calif. driver as the 2019 World of Outlaws NOS Energy Drink Sprint Car Series champion.

He beat 10-time and reigning Series champion Donny Schatz by four-points — the closest championship finish in the history of the World of Outlaws.

“I feel really relieved,” Sweet said after securing his first World of Outlaws title. “It’s just different than winning big races. A championship is just a different level. You try to act like it won’t affect you if you lose, but it’s been the most stressful couple days of my life to be honest. I tried to act like it wasn’t.”

Coming into the season finale race at the Can-Am World Finals Sweet had a mere two-point lead over Schatz — after losing six points to the Fargo, N.D. driver Friday night at the Charlotte dirt track. Sweet joked Saturday night that he kept asking, “Are you sure it’s two points? Are you sure?”

The last thing he wanted to see in Saturday night’s 30-lap Feature was Schatz’s Toco Warranty No. 15 car in front of him. It only took five laps for his fear to become a reality.

Sweet started third with Schatz behind him in eighth. Once the race went green for multiple laps, after being hindered by a caution and two red flags at the start, Sweet was stationary in third, while Schatz wasted no time charging his way forward.

After two laps Schatz had already rocketed his way to fourth, running the high side of the track. Sweet ran low, not making ground on the leaders and losing time to Schatz. On Lap five, Schatz powered to the outside of Sweet down the backstretch and cleared him for third going into turn three. Schatz needed to either win or finish two positions ahead of Sweet to secure what would have been his 11th championship.

A fire was lit inside the cockpit of the NAPA Auto Parts No. 49 car. “The Big Cat” was ready to fight back. Schatz slipped off turn four, allowing Sweet to pull even with him down the front stretch. Sweet then pulled the slide job of his life into turn one, darting ahead of Schatz, leaving inches between their bumpers as he slid in front of him. Sweet was then able to get the better run off turn two and drove away from his championship competitor.

“I never wanted to see the 15 pass me,” Sweet said. “I wanted to control our own destiny. I knew if I was ahead of him, you know, he couldn’t beat me. When he passed me, luckily, he slipped off four and I was able to pass him back. And I told myself right then and there you better run the best race of your life or you’re not going to win this thing.”

His self-pep talk worked. He continued to pull away from Schatz and caught Jacob Allen for second five laps after getting back by Schatz. However, the Tony Stewart/Curb-Agajanian Racing driver wasn’t willing to let Sweet run away with the championship either. He passed Allen for third shortly after Sweet went by and then kept his the blue No. 49 car in sight.

With 10 laps to go Schatz almost had the championship handed to him. The lapped car of Danny Dietrich spun directly in front of Sweet, forcing him to make a split-second evasive maneuver. The caution also put Schatz within reaching distance of Sweet.

However, on the restart Sweet didn’t give Schatz a chance to attack. He gapped the No. 15 car by three car lengths when the green flag flew and continued to drive away. He finished the night second behind race winner David Gravel with Schatz settling for third. It was a good enough run to earn Sweet the championship.

“I’ve never been more happy to run second in my life,” Sweet said.

“We dug everything we could. I drove it as hard as I could,” Schatz said. “Andy Durham, who built this engine did a great job. He told me earlier tonight, ‘Just run it. Pretend that there’s a fan blade there and you’re trying to trim your toenails.’ I did that. It just wasn’t good enough.”

After losing the championship to Pittman in 2013, Schatz went on a five-year streak of winning at least 20 races in a year and having the championship locked up long before the season’s end. This year he won 11 races — the third most wins this year — and trailed Sweet in points for the past two months.

There were some changes made with his team this year, such as getting a new crew chief and crew members, however he lauded their work each week. He did admit there were some personal matters that may have affected his performance, including finding out his father had cancer at the end of 2018.

“All that stuff is behind me,” Schatz said. “Is there times that it probably affected how this team was operated? Yeah. I did my best to not allow it, but we’re here today. We got ourselves in a position where we could still win a championship even with all of my problems, my issues. I did the best I could tonight. It wasn’t good enough. I would have liked to have figured out how to have a little bit luckier hands in the (Dash) draw but it is what it is. I’m not complaining about it. Yeah, it’s been a tough year but what doesn’t kill you makes you stronger. And cancer hasn’t taken my dad, so I’ll be stronger and so will he.”

Sweet cited Schatz as helping him win the championship, even going as far to call him a “teacher.” He finished second in points to Schatz the last two years — coming as close as 210 points to him. He learned how high of a bar Schatz sets and how consistent he needs to be each week to be in the championship hunt.

His studies paid off. He had the most consistent year of his career by finishing outside the top-10 only seven times in 72 races and collected 47 top-five finishes – the majority of them podiums. He also collected 16 wins – breaking his record for most wins in a season and ending the year as the winningest driver. He also won his second Kings Royal and earned his 50th career World of Outlaws win.

Sweet’s performance was a testament to his and KKR’s dedication to win. The championship is team owner Kasey Kahne’s second World of Outlaws title and the one he finds most impactful.

“I wasn’t as close to the teams back then (in 2013),” Kahne said. “That was my brother, Daryn and that team. They had an unreal season that year. I wasn’t as close to what they had going on. I was in Phoenix (for NASCAR) when they wrapped it (the championship) up back then. I was watching it on DIRTVision when I was supposed to be doing an appearance, things like that. It was exciting for me but far different this year being so much closer to it.”

The only trophy Kahne said he has in his home is the 2013 World of Outlaws championship trophy. Now he’ll have two.

Sweet got to hold his first championship trophy high above his head with fireworks and firebombs painting the background behind him. He was able to wear a smile many haven’t seen since his Knoxville Nationals victory last year. A smile of relief.

“Just so happy that we came out on top,” Sweet said. “You don’t know when the next opportunity to win a championship is going to be. You know, Donny is so good at running the points. We never really thought we’d have a chance to beat him. To come in here two points ahead, it’s kind of like winning the Knoxville Nationals on a green-white-checkered. Kind of the same feeling. You know he’s going to put pressure on you. Just so thankful we’re able to do it. We’re the best in the country now.”

David Gravel swept the Can-Am World Finals weekend at The Dirt Track at Charlotte, concluding a stellar season for he and Jason Johnson Racing in their first year together.

The Watertown, Conn. driver’s win Saturday night in Charlotte was his 12th win of the season – making him the second winningest driver this year, edging 10-time champion Donny Schatz for the spot by one win.

“Last night the car was OK, but tonight it was freaking bad ass,” Gravel said. “I had the best race car tonight, hands down. I could go top, bottom and it showed. I felt like I could get through lap traffic really really good and my job was easy.”

He started on the outside pole and passed leader Jacob Allen for the top spot on Lap six. Once he put his Mesilla Valley Transportation No. 41 car out front, no one could catch him. Even Brad Sweet said he was rooting for Gravel to pull away so Schatz couldn’t potentially steal the win and the championship.

Along with Gravel’s collection of wins — which include his first Knoxville Nationals victory — he earned 21 Quick Time awards and finished third in points for the fourth year in-a-row.

UP NEXT: The World of Outlaws NOS Energy Drink Sprint Car Series will begin its 2020 season Feb. 7-9 at Volusia Speedway Park for the DIRTcar Nationals presented by Bozard Ford. Get tickets and more information.