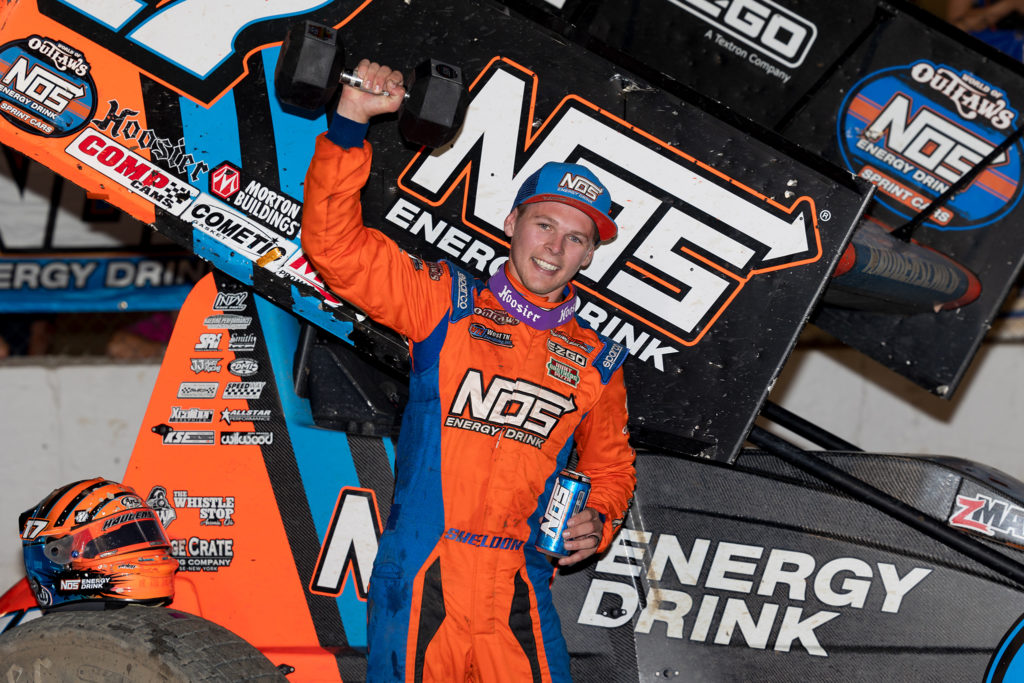 As time marches on, Sheldon Haudenschild’s legacy at Federated Auto Parts Raceway at I-55 only grows.

On Saturday night, the Wooster, OH native wrote his newest chapter by topping an electrifying 55-lap Feature that included a whopping seven official lead changes. His second Ironman 55 title puts him in rarified air with Craig Dollansky and Rico Abreu as the only multi-time winners in event history.

Compared to his 2019 beatdown of the field when he lapped up to fifth, this score came in a much more trying fashion. After starting fourth, the NOS Energy Drink #17 didn’t make it to the lead until Lap 21 and lost it on two occasions before securing it for good on Lap 44.

The $20,000 payday marks Sheldon’s fourth victory at the Pevely, MO bullring, putting him past his father Jac and in a tie as the fourth winningest Outlaw through 65 races at the track. He also becomes the first driver in 13 years of the event to sweep Ironman weekend.

Better yet, Haudenschild’s thrilling score came in front of the largest crowd in the history of Federated Auto Parts Raceway at I-55.

“We had to get our elbows up for that one,” Haudenschild said. “This track turned out beautiful. I just love this place. It suits my driving style so well. Excited to carry this momentum into Knoxville next week.”

The 55-lap endurance began with David Gravel placing the Big Game Motorsports #2 in the lead as he chased his first Ironman award. Parker Price-Miller entered the picture on Lap 6, sliding by Gravel and taking the Roth Motorsports #83 to the top spot in only his second start aboard the #83 ride.

PPM led the next 10 laps before heartbreak ensued. A cut right rear tire while pulling away with the lead sent him into the turn four wall and flipping upside down to bring out the red flag on Lap 15. With assistance from countless other teams, the #83 was able to re-fire and ultimately finish 13th, but you can’t help but wonder to what could’ve been for the Kokomo, IN native.

Gravel re-inherited the lead and paced another five laps before Haudenschild came to play and slid by him on Lap 21 just as the caution flew. Capitalizing on the restart, Gravel drove right back by him to assume the lead on Lap 22, which he would hold for 11 more laps.

More green flag laps allowed Haudenschild to close and rocket back to the lead on Lap 33. He retained the spot for nine laps until a #OpenRed on Lap 41 created another challenging restart for the 27-year-old.

Once again, Gravel took advantage and went back to the lead as the field re-fired on Lap 42. The next five laps were an all-out war with Haudenschild chunking sliders at Gravel all while McFadden, Sweet and Schuchart entered the picture.

Ultimately, Haudenschild returned to the lead on Lap 44 and commanded the final 12 laps before crossing the finish line with a 0.733-second margin of victory.

Moving from 12th-to-second, James McFadden and the Karavan Trailers #9 team earned KSE Hard Charger honors on the night. Chasing them was Kasey Kahne Racing teammate Brad Sweet in the third spot aboard the NAPA Auto Parts #49.

Former Ironman 55 champions Logan Schuchart and Rico Abreu closed out the top-five at Federated Auto Parts Raceway at I-55.

UP NEXT: The World of Outlaws NOS Energy Drink Sprint Car Series heads to The Sprint Car Capital of the World. A week-long vacation in Knoxville, Iowa will bring tens of thousands of fans and more than 100 cars to compete in the 60th NOS Energy Drink Knoxville Nationals pres. by Casey’s.