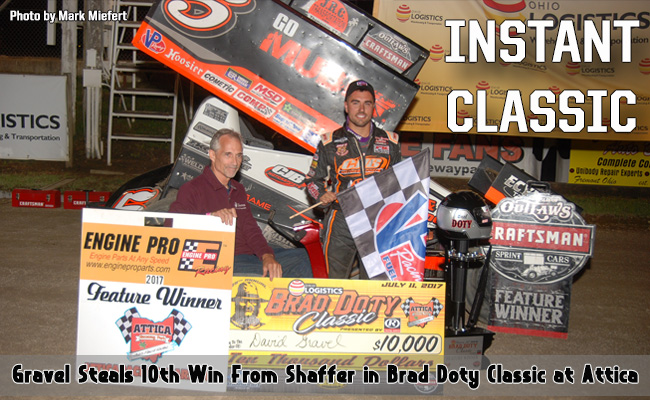 ATTICA, OH – July 11, 2017 – Tim Shaffer dominated the World of Outlaws Craftsman® Sprint Car Series Brad Doty Classic at Attica Raceway Park, but David Gravel’s late surge allowed him to take over the point coming to the white flag and lead the final two laps to steal the victory on Tuesday night. It was Gravel’s 10th win of the season, setting a new career-high season wins record for the Watertown, CT driver.

Daryn Pittman rounded out the podium after a thrilling late battle with Rico Abreu and Brent Marks. Brad Sweet earned a fourth-place finish and the KSE Hard Charger award after starting 25th. Sweet was forced to take a provisional when he could not advance beyond the C-Main after winning the D-Main. Abreu rounded out the top-five finishers.

“It’s awesome,” Gravel said in Victory Lane. “(When the Brad Doty Classic was) at Lima, I finished on the podium a couple of times and could never win one. To win it at Attica where we couldn’t even make it out of the ‘C’ last year, to rebound like that and win is just awesome. There’s so much prestige with this race. Everybody wants to win Brad Doty’s race and you see it with 58 racecars (in the pits). I’m just happy to do it and do it at Attica.”

Shaffer was the polesitter for the 40-lap main event with Attica fan favorite and Kevin Gobrecht rookie-of-the-year contender Sheldon Haudenschild on the outside of the front row after both drivers won their respective Craftsman Club Dashes. Shaffer jumped to the early lead ahead of Haudenschild while the rest of the field battled two and three-wide.

Shaffer wound up in traffic on lap seven, but didn’t have to deal with it for long. A red flag on lap nine when Dominic Scelzi turned on his side in turn two led to the first restart and gave Shaffer a clear track.

However, it was Haudenschild who got the better restart and slid in front of Shaffer to the lead in turn two. As Shaffer turned his No.49x back under Haudenschild, the two drivers made contact exiting the corner, which flattened a left-side tire on Haudenschild’s No.93.

Before the lap was complete, Kyle Larson spun his No.57 at the bottom of turn three to bring out the race’s second stoppage and allowed Haudenschild to replace the tire. Both Larson and Haudenschild were able to return and raced from the back to 10th and 12th-place finishes, respectively.

On the ensuing single-file restart, Shaffer drove away to sizable lead again, this time ahead of Abreu and Pittman. Fifteen laps in, Shaffer was battling slower traffic again with a convincing 1.8-second lead to work with. It was erased by the final yellow flag of the race on lap 17 when Max Stambaugh came to a stop on the backstretch.

Shaffer continued his dominance on the restart, but 10 laps later Abreu reeled him in up front and tried to take the lead with a slide job, but was denied. With less than 10 laps on, Gravel began to make his move from fourth. A spirited battle with Pittman resulted in Gravel moving into third shortly after Shaffer lost time when he bobble against the turn two cushion on lap 33.

With five laps to go, Gravel all of a sudden eliminated the advantage of the top two drivers and used a big slide job in turn three to take second from Abreu on lap 37. Gravel then quickly caught Shaffer and going into turn three as the field raced to the white flag, Gravel drove around Shaffer to take over the point. He led the final two laps at the stripe to secure the win for his CJB Motorsports team.

“I was in fourth, I think, with five laps to go,” Gravel explained. “I got a run on Daryn and he and I were racing really hard. I got by him and found the bottom in (turns one and two) and closed in on Rico really fast there. I threw a pretty big slider on Rico to get by him and Tim ran the bottom in one and two the lap before. If he did that, I probably wouldn’t have been able to get by him. Luckily he did and left the door open and we took the lead on the white flag lap and just had to hold on for one more. It’s pretty awesome.”

Shaffer was understandably disappointed with his runner-up finish after the victory was snatched from his grasp over the final two laps. Nonetheless, Shaffer was congratulatory in his post-race remarks.

“I knew I needed to move around,” Shaffer said of his late decision to change lines. “We went low that one time and it went pretty good, but it took so long to get in and I decided I lost a lot. It’s one of those deals where you’re up front and you’re not sure. This is a hard one to lose, but I’ve won them that way too. It goes both ways. Those guys did a heck of a job, so hat’s off to them.”

Pittman’s third-place finish continues a streak of strong runs and is his 12th top-five finish this season. The former Outlaw champion was in part disappointed he was not able to pull off the victory from his advantageous positions.

“Gravel got by me with probably five or six laps to go and then I moved to the top in turn three and four and felt really good,” Pittman said of the late-race chaos. “I felt like I gained a lot more speed doing that and obviously got to race through lapped cars and he got back by me and ended up winning the race. I’m frustrated with myself as a driver. I think when they got to traffic Shaffer and Rico both slowed down a bit and I thought I was in position to try to steal that one. Instead of me, Gravel was sitting in fourth and stole it from all of us.”

Prior to the 40-lap Feature, Rich Farmer, Mike Leone and Gill Construction put up an extra $1100 if a FAST driver could score the win. The only eligible driver for the bonus was Lee Jacobs, who finished 17th.

Earlier in the night, Dale Blaney and Brent Marks were the fast qualifiers in their respective time trial fligts, earning an extra $400 bonus each from SprintCarUnlimited.com. Blaney, Stewart, Abreu, Pittman, Haudenschild and Gravel were the heat race winners. Sweet won the D-Main before Chris Andrews claimed the C-main victory and Parker Price-Miller scored victory in the Last Chance Showdown.

The World of Outlaws are now set to head to Eldora Speedway for Kings Royal Weekend. The event starts with the Jokers Wild on Thursday, July 13 before the Knight Before the Kings Royal on Friday, July 14 and culminates with the $50,000-to-win Kings Royal on Saturday, July 15. To purchase advance reserved seating for all three nights, visit www.EldoraSpeedway.com.