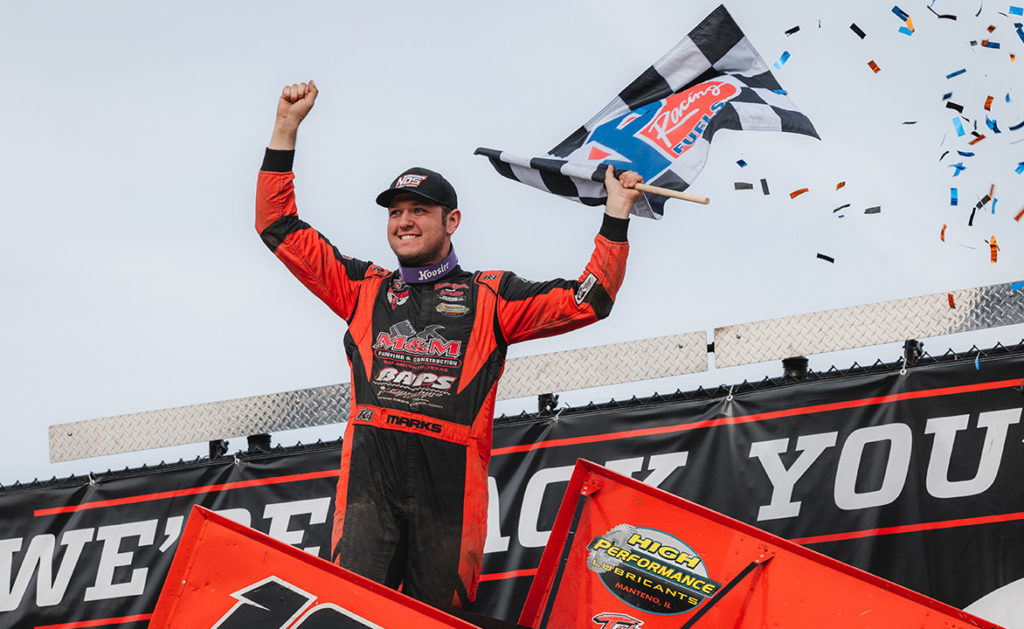 May the 8th represented hope, triumph and pride for the World of Outlaws NOS Energy Drink Sprint Car Series and the entire dirt racing community last year. It was the day the Series overcame one of its greatest adversities and returned to racing during a pandemic.

This year, May 8 is a day of hope, triumph and pride for Brent Marks.

Back behind the wheel of his family-owned #19m Sprint Car with the World of Outlaws for the first this year, the Myerstown, PA driver overcame a poor qualifying effort to claim his fifth Series victory Saturday afternoon during the first round of the #LetsRaceTwo at Eldora Speedway. It was also the Series’ first time back at the “Big E” since 2019.

“This is awesome,” Marks said. “A very surreal moment. We’ve been running good here the past couple of weeks. The car has been awesome.”

The first of two #LetsRaceTwo events was scheduled to run Friday night, but after heavy rain showers pushed the start of the event past midnight and cold temperatures didn’t allow for suitable track conditions for racing, the cars only practiced and qualified – with David Gravel setting Quick Time – and the rest of the event ran Saturday afternoon.

In the early morning qualifying, Marks knew he’d been too cautious after qualifying 27th. But with a good night’s rest and waking up to clear skies and a clear mind, Marks was ready to hold nothing back.

He lived up to his nickname, the “Myerstown Missile,” by seemingly breaking the sound barrier with his run from seventh to second in the opening two laps of his Drydene Heat Race. From there, the fuse was lit, and target was acquired. A direct hit on his first World of Outlaws win since the National Open in 2019 was in his crosshairs.

However, in his way were two fierce fighter pilots fueled by human horsepower. NOS Energy Drink sponsored drivers Sheldon Haudenschild and Tyler Courtney held a comfortable one-two finish in the DIRTVision Fast Pass Dash to start on the front row of the 30-lap Feature. Haudenschild, an Ohio native, was on the hunt for his first home-state win at Eldora, and Courtney was looking to sweep round one, having won the USAC Sprint Car event before the World of Outlaws Feature.

When the green flag unraveled into the crisp air, Haudenschild launched ahead of the field to claim the early lead while Courtney faded, giving second to Marks and third to Gravel.

Two cautions plagued the momentum of the first four laps, but not Haudenschild’s command of the lead. He pulled away from Marks on each restart, finding the dangerous combination of speed around the top and bottom of the track. Marks maintained about a second gap behind Haudenschild but initially couldn’t find the grip to catch the NOS Energy Drink #17 machine, even while Haudenschild struggled to navigate the slower traffic.

As the green flag run continued, new threats began to emerge behind them. Aaron Reutzel was on the move, making his way from 16th to third in the first five laps and Logan Schuchart – the last World of Outlaws driver to win at Eldora – was also hunting his way forward from fifth.

However, Schuchart’s streak of bad luck continued when he was the caution with 14 laps to go. While trying to pass Reutzel for third, the two made contact and Schuchart slammed the wall off Turn 4 with his right rear tire and blew it. A red flag on the restart gave his team more time to fix the damage and he ended up savaging a ninth-place finish by the end of the race.

“I have to apologize to Logan there, I definitely didn’t mean to get into the back of him,” Reutzel said. “I was trying to just let him slide by and try to get going in the rubber… I must have just caught him when he went by. That was definitely my fault.”

Before the caution for Schuchart, Marks had cut the gap between him and Haudenschild in half. He made sure to not let the yellow defuse his run when the race resumed. He stayed locked on Haudenschild’s bumper, finding grip through the middle of Turns 1 and 2 and setting up a run into Turn 3. By the time they saw the flag stand again, Marks was out front.

His red and white #19m pulled away with 13 laps to go. Reutzel was stuck in third with a hard charger Donny Schatz on the move behind him from the 17th starting position.

Haudenschild pushed his Stenhouse Jr.-Marshall Racing machine to its limits in the closing laps, bouncing off the wall a couple of times but never losing speed. That began to pay off in the final three laps as Marks took ease with his throttle around the slick track.

Three car lengths. Two car lengths. Haudenschild was at Marks’s bumper in Turn 4 with the white flag in the air. Marks’s name couldn’t grace the $10,000 check just yet.

Perfecting his line one more time, Marks was able to hold off Haudenschild and earn his third overall win at Eldora and third win in three weeks behind the wheel of his own car.

“This thing was just really, really good,” Marks said. “It started taking rubber with about 15 or 16 to go. I was gaining on Sheldon a little bit and he found it. I knew I had to get him on the restart and do everything I could. This is awesome to get my first Outlaw win in a little while.”

Haudenschild’s car was found to be light at the scales after the race, taking him off the podium and giving him a 24th-place finish. That gave second place to Reutzel (the KSE Hard Charger) and third to Schatz.

“We just went back and changed everything,” Reutzel said. “We’ve been struggling the last few weeks. We went back to some stuff we did two years ago, and it helped a lot. We still have some work to do. Just have to start farther up in these races.”

While he may not have earned the podium on track, Schatz was happy to walk away with a decent finish before having to climb back into his Tony Stewart/Curb-Agajanian Racing #15 machine later tonight for #LetsRaceTwo round two.

“Hats off to our CARQUEST guys, they’ve got all the dig in the world,” Schatz said. They keep trying to make things better. Thanks to all the fans for sticking with us today. It’s challenging to get it in, but we’ve got our full USAC show and Outlaw show and we can start again. Just glad to have a decent day and get a good finish.”

UP NEXT
The World of Outlaws NOS Energy Drink Sprint Car Series will run the second part of the #LetsRaceTwo event at Eldora Speedway tonight at 8pm (ET).