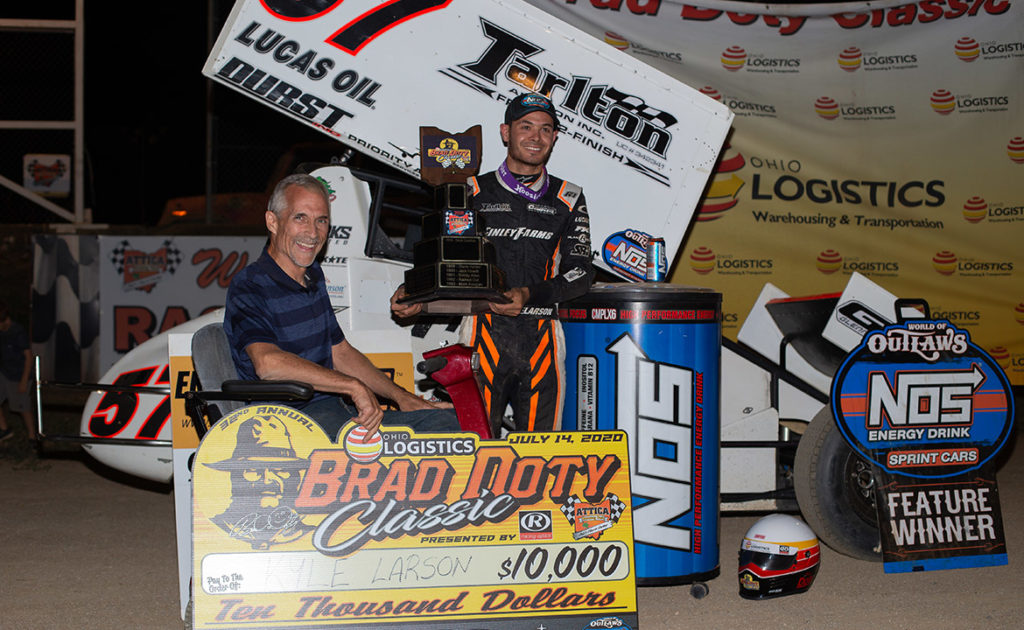 By the time the checkered flag fell at Attica Raceway Park Tuesday night, there wasn’t enough room on the front page of the morning paper to fit all of the headlines.

“It’s one that I think everyone looks forward to running,” Larson said about winning the Brad Doty Classic. “Brad (Doty) is such a nice guy and has done so much for this sport, long before I was born. It’s cool to get the opportunity to run this race. I got beat by Donny the last time we ran here, so it was good to edge him there.”

Larson was a dominate force all night. He won his Drydene Heat Race, drew the number one pill for the DIRTVision Fast Pass Dash and then won the Dash by four seconds to start on the pole for the 40-lap Feature.

Sweet was on track to have a similarly strong night in the early stage of the event. He set Quick Time in Flight 2 of Qualifying and had a commanding lead in his Heat Race before his motor let go – a similar scenario Schatz faced on Sunday at the Terre Haute Action Track. Sweet then won the Last Chance Showdown, earning him the 21st starting spot for the Feature out of 25 cars.

When the Feature commenced, Larson left Schatz. He pulled away to about a second lead in the first two laps before the caution came out for Sweet spinning in Turn 4. With no damage, he got pointed in the right direction and continued.

The green flag flew again and Larson continued to be a missile on four wheels. While Schatz could keep the Finley Farms #57 in sight in the first two corners, Larson would find another gear and rocket away from the field. He was able to maneuver through lap traffic with the apparent foresight of where they would go.

On Lap 17, Logan Schuchart and Kerry Madsen made contact, putting Madsen in the wall. Carson Macedo spun while trying to avoid the wreck and made contact with Ian Madsen and caused Sweet to flip.

Enough repairs were made to Sweet’s car to get him back on track with seconds to spare. However, with a damaged wing and other bent parts, Sweet was well off the pace. Another red flag came out a lap later, allowing Sweet’s Kasey Kahne Racing team to continue working on the NAPA Auto Parts #49. The repairs helped him pick up more speed, but with three laps to go he slowed with another issue and pulled off track – the first time since 2013 he’s had three consecutive DNFs.

Before then, Larson made qualifying laps while Schatz searched to match his speed. And behind them the father and son duo of Sheldon Haudenschild and Jac Haudenschild put on the show of the night. They officially swapped positions four times throughout the race, but were side by side, feet apart throughout the 40-lap event.

Larson hit heavy traffic in the closing laps, allowing Schatz to close in and have thoughts of stealing the win away from him. Schatz showed Larson his nose a couple of times, but Larson found clean air and rocketed away again before Schatz could attempt a pass.

“It was nice I could look back and see they were half of a track behind me,” Larson said. “We had a good car there… Whenever I would get within a straightaway of lap traffic, I couldn’t see the cushion and started to make mistakes and thought I could cheat the corner and slide myself. I say Donny (Schatz) show is nose a couple of times. I had to get aggressive to get around those two slower cars. I was able to do that and get some good consistent laps put together.”

“It’s just the way it goes,” Schatz said. “The car was solid. A solid night. My (Tony Stewart/Curb-Agajanian Racing) guys have done a great job… We just needed to stay in traffic.”

Schatz’s consistency couldn’t have come at a better time with Sweet’s consistent bad luck. However, Schatz can sympathize with Sweet, knowing how easy it is to go from dominating to struggling.

“There’s only one thing I can control, which is going on with this (TSR) 15 car,” Schatz said. “I can’t control what goes on with anything else. I’ve been in that position before. Things go for you and they go against you. It’s all part of the game.”

Sheldon won the battle against his dad, rounding out the podium – his 15th top-10 finish in a row. Logan Schuchart snuck by Jac in the closing laps to finish fourth and earn the KSE Racing Hard Charger Award – coming from 11th. Jac finished fifth – his first top-five of the season.

With the back half of the 2020 season starting in Pennsylvania next week, the top-five in points are now all within in striking distance of the championship points lead.