CHECKERED PAST: The Port

Port Royal, Pennsylvania’s sparkling “Speed Palace” is evidence that a beautiful swan can evolve from an ugly duckling. To say that such a beautiful woman scarcely reflects her rough origins is to compare splintered oak to polished steel. The old girl had plenty of personality and atmosphere but today’s heartbreaking half-mile is superior in every physical aspect.

Before her Quaker State makeover into one of America’s finest facilities, Port Royal sprint car observers were limited to a low open bleacher exiting turn four, cavernous infield or 138-year old covered grandstand. None afforded a view of the entire oval. Lighting was weak. Rim riders were rumors. Port Royal’s old box did enable such sensory overload that fans were tempted to don helmets. First, its concrete base doubled as an outside wall to bring wings near enough to trim fingernails. Second, the enclosure at the end of the chute enabled unlimited engines to build speed before abruptly appearing. Some drivers were already turning in so wind from sideboards blew the bird nests right out of the rafters. Eyes burned with methanol and sometimes nitromethane. It was so loud that you could scream, “Just watch Keith Kauffman!” to a person seated inches away and they would not hear a word. To quote a friend after a Motorhead concert, “It was like sticking your head in a jet engine!”

Sensations of “The Speed Palace” are exceeded by the history that permeates the Juniata County Fairgrounds. Stroll this tunnel through time… 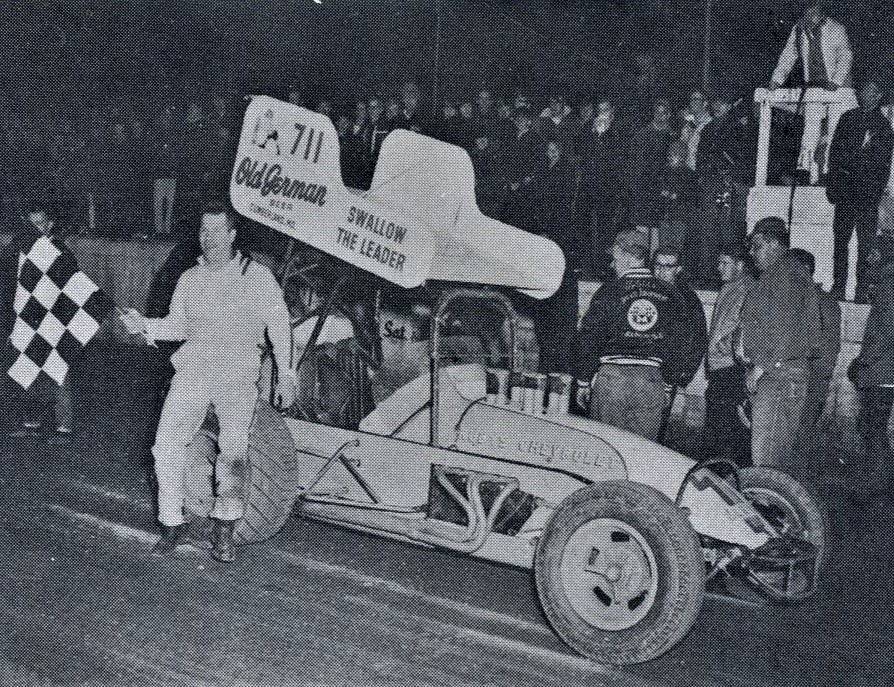 Sept 10, 1971: Al Hamilton Contracting of Clearfield leveled the Tuscarora 50 podium with Smokey and Cassella first and second. Ruby recorded four wins. Snellbaker and Roy bagged four; so did Lynn and Shorty. Grum and Cowboy took three. Felty squeezed in a win during his URC title campaign. Beavertown’s Barry Camp (Dick Bogar 99) finally won only to get canned for a long-haired Jesus freak from Haight-Ashbury.

May 28, 1977: Mitch (Hamilton 77) defeated Nace, Paxton (Benchoff 11), Sheaffer (Dyer 461) and Grum, who then won the late model main. Mitch and Al hogged nine of 23. Paxton and Bob Benchoff bagged three. Keith Kauffman was a boy when compiling the first three wins that would establish him as “The Man From Mifflintown.” Lincoln rained out so Steve Smith punished Port after Weld broke. Smokey sealed the first of 21 Port wins for Charlie Lloyd and son Mike. Howsare had two that concluded with Tuscarora 50 for Boop’s Aluminum.