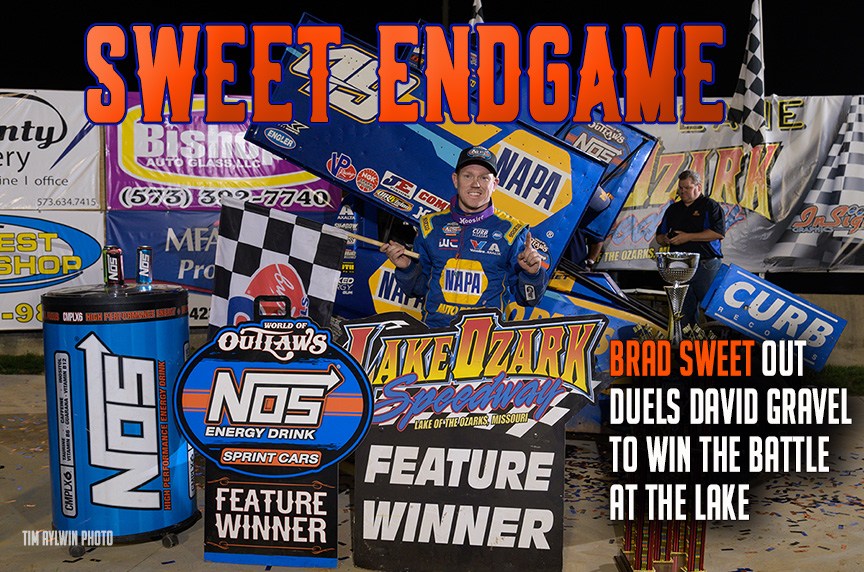 The atmosphere of dust around the 1/3-mile track fell to the ground in slow motion around the still cars. Sweet’s straightaway lead on second place David Gravel vanished with the snap of a finger. Time was no longer his to freely play with. He had to defend it.

When the green flag flew once again and the thunder of the cars struck the facility, Sweet – looking for his second win of the season – tried to jolt his way back to a commanding lead. But Gravel struck just as hard.

Determined to win in his Jason Johnson Racing team’s backyard, Gravel became the mad titan of the high side. He used every inch of it to find the grip he needed to conquer his quest for the lead.

A lap after the restart, he did.

Gravel took the lead and set course for Victory Lane; a place he has visited twice this year already. His power lust of the high side soon became his downfall, though.

Sweet was not going to live with second. Determined to leave hoisting the trophy, the Grass Valley, Calif. native used his years of experience to find the right line and reel Gravel back in.

With four laps to go, Sweet found his advantage. He slid under Gravel in turns one and two, clearing him on the backstretch and then changing course to the high side of the track for the final few laps.

Sweet still wasn’t invulnerable, though. Gravel tried every line he could to stay on Sweet’s bumper. Not only did the Watertown, Conn.-native not want to lose the lead, but he could feel the breath of 10-time champion Donny Schatz down his neck.

With the checkered flag flying, Sweet saw a potential victory and defeat at the same time. One turn away from victory, a lap car blocked Sweet’s run off turn four, allowing Gravel to close through the middle of the track and Schatz to close on him on the bottom.

But they were in Sweet’s endgame. He hammered the throttle off of turn four and found enough grip worthy of a strong run off the corner to claim his 36th career World of Outlaws victory.

“I almost gave it away in the last corner,” Sweet said. “All that matters is we hung on to the checkers and got the win.”

While the battle with Gravel was nerve-racking, he said, the most challenging part of the night was trying to find the best line.

“The top got tricky, then I had to get the bottom going, and the bottom got slow and tricky, as well,” Sweet said. “Just trying to maneuver through lap cars, that’s key to winning these races. We’re getting better and better at managing our tires and getting through lap cars. Tonight, I thought we did a really good job and did everything perfectly until that caution.”

Gravel knew if Sweet stuck to the bottom on the restart he could get by him on the high side. But he said, with five to go, the high side just didn’t work for him anymore.

“The top got extremely tricky at the end,” Gravel said. “Our right rear tire was going low, and that doesn’t help on the cushion. A couple of little things that hurt us a little bit. Just those last three-four laps were not good laps, and paid for it.”

His second-place finish is not looked at as a failure, though. With his team based about eight miles from Lake Ozark Speedway, Gravel said the No. 41 car team’s performance was good and they have to be proud of their night, which started with going Quick Time in Qualifying.

“If we can do that nine times out of 10, we’ll be having a really good year,” Gravel said.

Gravel’s second-place finished has left him tied for fourth in points with rookie Carson Macedo, who also had a night to be proud of. In his first appearance at the speedway, Macedo earned the KSE Hard Charger award – making his way through the field like a veteran, going from 18th to sixth.

“I think it took us a little bit to learn the race track and know what we need,” Macedo said. “It took a little bit for me to get use to the place, as well. Being the first year with me out here, I think it’s one of them deals where we have to learn throughout the night and continue to try and get better and better.”

Macedo and Gravel are 96 points behind points leader Sweet. The battle for the points lead remains tight with Schatz only eight points behind Sweet and Daryn Pittman – who finished fifth – 16 points back in third.

Sweet has become the fourth driver this year to win more than one race – Pittman, Gravel and Logan Schuchart also have two wins. His triumphs this season have not changed his itinerary for the season.

He still plans to end every race the same way he did at Lake Ozark Speedway – in his own timeline with an atmosphere of confetti falling to the ground in slow motion around his still car and a trophy that’s his. Only his.

UP NEXT:
The Greatest Show on Dirt will make its next stop Saturday, April 27, at Federated Auto Parts Raceway at I-55 in Pevely, Mo.