At a Glance: Unfinished business 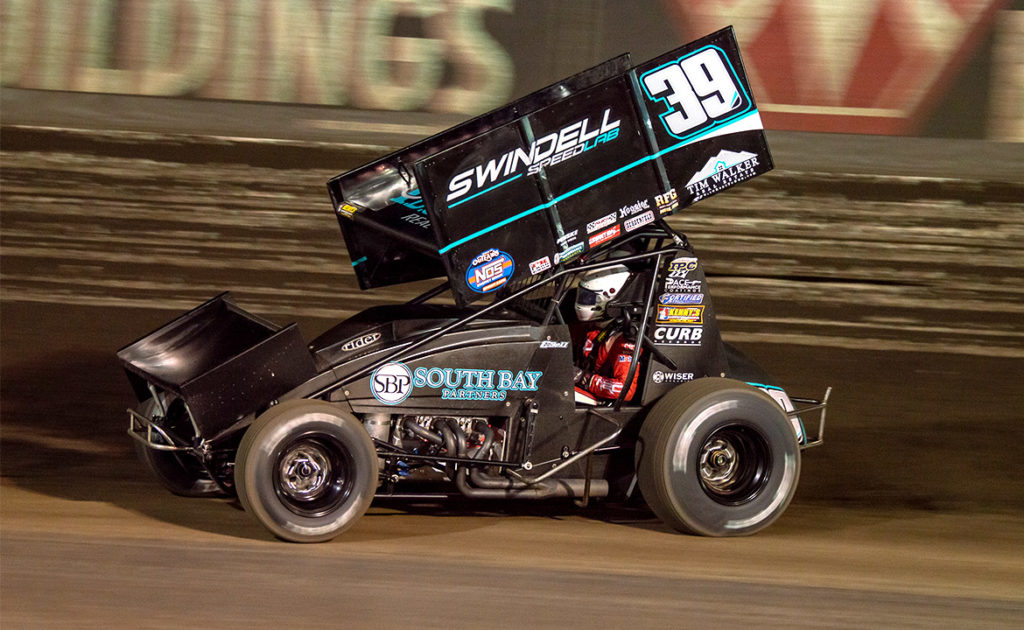 A spinal injury from a crash at the 2015 Knoxville Nationals ended his driving career — leaving him with one World of Outlaws victory as a driver — but it hasn’t stopped him from chasing wins.

For the past three years Swindell has been entering his No. 39 Sprint Car in various races — next on the schedule will be this weekend’s World of Outlaws doubleheader at Eldora Speedway. But the top wing no longer has “Swindell” stickered across the front of it. Instead it’s been names like Bayston and Bell.

Accented by a teal strip and letters, Swindell’s name has found a new home on the side of the car as Swindell SpeedLab — the name of his team and other avenues, such as apparel — signifying his transition to car owner.

“I think any of the guys out there (in the Sprint Car community) would say they’ve thought about it (owning a team),” Swindell said. “Done right I think owner-driver is the most profitable way to do it. But someone else driving for me never was a thought.”

It never was after his accident, either. Owning a team grew out of trying to help a young driver enter the top Sprint Car ranks.

In 2015, Swindell found himself acting as a driver coach and crew chief for Spencer Bayston, who at the time was running Parker Price-Miller’s spare car in select races. The two clicked. When Bayston was looking to do more Sprint Car races the year after and rides fell through, Swindell said they linked up. The inaugural Swindell SpeedLab team was born.

“We really built it for him (Bayston) with no real future plan in mind for it then,” Swindell said.

The pair won multiple races together in the All Star Circuit of Champions Series, and Bayston’s success propelled him to a current full-time ride in that Series.

As for Swindell and his team, the vision into the future is a little blurry. Swindell said he’s not sure what the ultimate goal for the team is.

“We’ve been lucky so far just kinda letting it evolve on its own,” he said. “So, we’ll just keep seeing where it takes us.”

At the moment, he hopes to be able to continue helping young drivers. He plans to have Missouri-native Hunter Schuerenberg drive the car in a couple of races this year. Going full-time with the World of Outlaws isn’t on the radar at the moment, but he’s still eyeing several victories in the Series.

“It’s the premier dirt Series in the world, in my opinion,” said Swindell, son of three-time World of Outlaws champion Sammy Swindell. “And it’s been such a big part of my family for so long that winning those races is huge to me. I think in a way there were things I left unfinished in the seat that now I’m chasing from this side with it.”

Swindell won his lone World of Outlaws race at The Dirt Track at Charlotte Motor Speedway in 2006. He was 17 years old when he won, which at the time made him the youngest ever winner in the Series, a record that was broken by 16-year-old Giovanni Scelzi last year. After that he won several other Sprint Car and Midget races — including four Chili Bowl Midget Nationals wins in-a-row — and had a short stint in NASCAR before his 2015 accident.

With Bayston in a new ride, Swindell has hired another young up-and-coming driver to help him chase more wins — NASCAR star Christopher Bell. And those wins almost came during the two World of Outlaws season opening races at Volusia Speedway Park.

Bell finished third on the first night of racing after winning the Drydene Heat Race. He then followed that up the second night by winning the DIRTVision Fast Pass Dash, leading 25 of the 30 laps in the Feature and battling with 2013 Series champion Daryn Pittman late in the race, eventually having to settle for second. He ended up leaving Florida second in points to Pittman.

“I was pumped,” Swindell said about Bell’s performance. “I really felt like had traffic played in our favor a little bit more we would have picked up two or three of those nights (at DIRTcar Nationals) but that’s part of racing with these guys. They don’t let you slack anywhere. It makes you so much better.”

Swindell started working with Bell last year after Bayston and the team were going through a low point.

“We crashed and just needed to get a second opinion for both of our sake on the cars,” Swindell said.

At the time, Bell was ride hopping, he said, so he sent him a text to gauge his interest. Bell had shown interest before, but Swindell said he wasn’t sure if the 2017 NASCAR Truck Series champion was just joking or not.

“His team is new, but he has proven it (is a strong team) with multiple drivers,” Bell said. “They had a lot of speed with Spencer in the car, so I knew it was capable of running up front.”

Bell added that driving for a team owner who recently stepped out of the car has its advantages, as well.

Bell’s schedule with the Swindell SpeedLab team is up in the air. At the beginning of the year Bell said he hoped to do about 20 to 25 Sprint Car races this season. Many depend on the approval of his NASCAR team, Joe Gibbs Racing, giving him the approval to run the races.

Swindell said he would like to extend his schedule with Bell, who he treats like any other Sprint Car driver — paying him for his time in the car. At the moment, however, he’s excited to get to their next race already scheduled — Eldora Speedway, on Friday May 10 and Saturday May 11 for the #LetsRaceTwo.

Bell cites the Rossburg, Ohio speedway as one of his best tracks. And for good reason. Of his four World of Outlaws victories two have come at Eldora, with the most recent being the Series last visit to speedway in October.

“Obviously his track record speaks for itself, so now I gotta do my job with it,” Swindell said. “I just truly don’t want to screw it up. We know he does his part there. So, I’m excited but nervous at the same time.”

While it’s Swindell’s car going around tracks he would like to win at, there’s no weird feeling watching someone other than him drive it. He said part of that is it wasn’t his car to drive to begin with. The accident may have ended his driving career, but it far from ended his Sprint Car career.

“After feeling like we were so close to winning one at Lake Ozark (Speedway) last year with Spencer, then such good runs at World Finals, I’m dying to close one out,” Swindell said.

AROUND THE TURN: The World of Outlaws NOS Energy Drink Sprint Car Series will next race on Wednesday, May 15, at Lincoln Speedway in Abbottstown, Pa., Friday, May 17, and Saturday, May 18, at Williams Grove Speedway in Mechanicsburg, Pa. and Sunday, May 19, at Weedsport Speedway in Weedsport, NY.