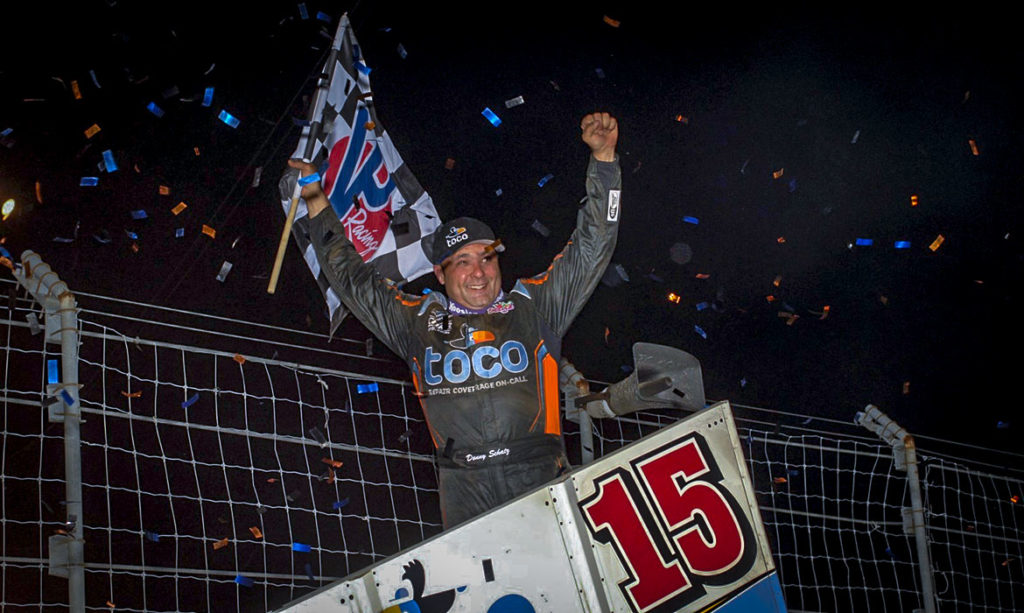 It’s intro, an impassioned announcer filling ear drums with a four-wide call. It’s verse, thunderous 900-hp Sprint Cars shaking a packed grandstand for 30 laps. And its coda, a jubilant Donny Schatz exhaling a single “Woo!” from the top wing of his car with the checkered flag in hand and glimmering confetti floating around him.

“Anytime you go anywhere new it’s always good to get a win,” said 10-time Series champion Schatz, after claiming his 286th career win. “We’re in an awesome market that we’ve never been to before. It’s great to win the inaugural race here.”

Schatz became the first World of Outlaws driver to win on the quarter-mile Nashville Fairgrounds Speedway track, which is an asphalt track that was covered with about seven million pounds of dirt to accommodate the Series.

The Tony Stewart/Curb-Agajanian Racing driver didn’t just conclude the ballad of the historic race, he was the bridge – the turning point of the night that made fans’ eye lids widen and heart rate increase.

He built to that point of the night by first winning his Drydene Heat race and drawing the third starting position for Feature.

From there he had to find his way around polesitter Bill Balog and outside polesitter Brad Sweet – who sits runner-up in points to Schatz – in order to claim the first night of the Music City Outlaw Nationals doubleheader.

On the first lap, Schatz worked his way under Sweet by hugging the bottom of turns one and two, clearing the Kasey Kahne Racing car before the next turn. The battle was then between the northerners – Fargo, N.D.-native Schatz and Wisconsin resident Balog.

Schatz rode the low line throughout the night, keeping a light right foot on the throttle around the tight slick track. Balog stayed a lane above the bottom, finding enough grip to stay ahead of the reigning Series champion, but not enough to increase the distance between them.

The duo reached a hoard of lap traffic by Lap nine – a scenario typically tightening the battle for the lead. However, Balog was able to use the traffic to his advantage. At times Schatz would close the gap, but with each lap car Balog passed he put a car length between he and Schatz.

Then on Lap 14, caution. Schatz was brought back to being inches away from the yellow No. 17B’s bumper.

When the race resumed, Balog didn’t give into the pressure. He maintained his lead and put about a two-car length distance between he and Schatz.

The race was building to be the song of Balog’s second career Series win. Then the bridge.

With nine laps to go, Balog lost traction off turn four, exiting the corner sideways. By the time he straightened out the car, Schatz was there. His winning performance was over.

Schatz slid past Balog for the lead in turn one. Balog attempted to sneak underneath Schatz exiting turn two, but Schatz shut the door, briefly touching his left rear tire with Balog’s right front.

“We probably tightened it up too much,” said Balog, who ended up third. “But… leading some laps with the World of Outlaws is pretty awesome. It was disappointing, I made a couple of little mistakes and you can’t do it with them guys. They’re going to get you.”

His mistake allowed Schatz to click off laps in the lead until reaching the checkered flag – picking up his third win of the season.

Sweet followed Schatz passed Balog to finish second, but with the No. 15 car finishing one spot ahead of him, Sweet remains second in points, now with a 52-point deficit.

Behind the podium, Brent Marks earned his first top-five of the season, finishing fourth, and Sheldon Haudenschild found his way back into the top-five, finishing fifth, after a tough month of May that saw him miss four Features in a row.

“It’s definitely good. Good for our team,” Haudenschild said. “I think anytime you get in the top-five is definitely a little bit of a confidence builder and something to build off.”

Schatz is also looking to build off his Nashville win to turn his team’s consistent run of top-five finishes into consistent wins.

With the air strumming of his newly earned metal guitar trophy in Victory Lane and $15,000 prize winnings, Schatz wrote a new ballad into Nashville’s history books. A ballad of heart break. A ballad of dirt roads. And a ballad of outlaws. The World of Outlaws in Nashville.

The World of Outlaws will return to Nashville Fairgrounds Speedway Saturday, June 1, for the final night of the Music City Outlaw Nationals with $25,000-to-win on the line.