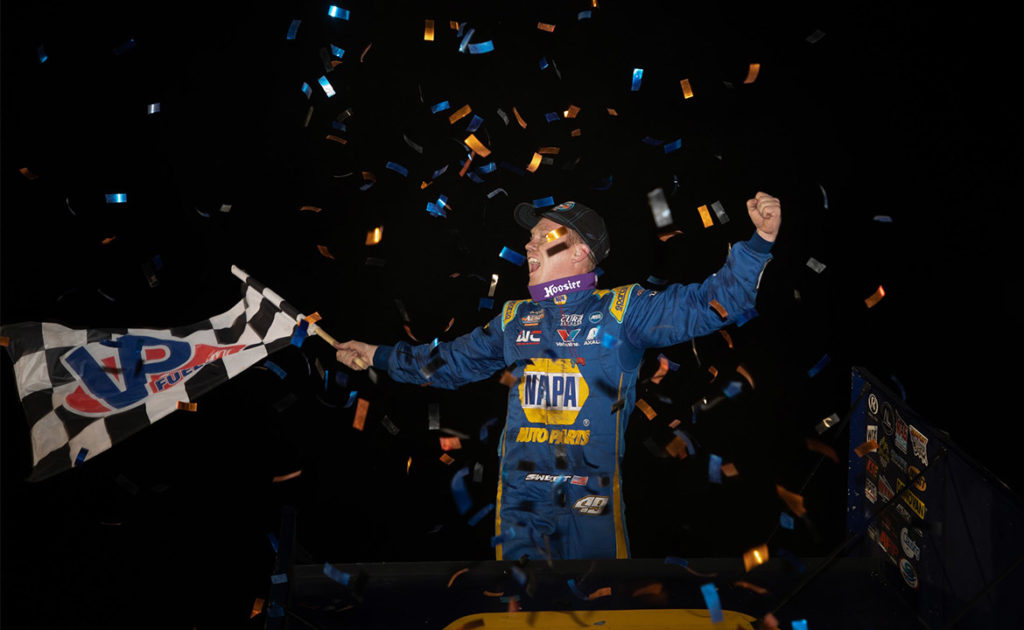 He’s tasted victory six times already this season – including a win Thursday night at Jackson Motorplex – but with $41,000 and the title of Jackson Nationals champion on the line, his appetite wouldn’t be appeased until the night’s entrée was his.

He had to battle through cautions, lap traffic, smoking tires and an equally as hungry Donny Schatz, but at the end of the 35-lap Feature, Sweet drove his NAPA Auto Parts No. 49 car to Victory Lane for the seventh time this year, claiming the 41st Annual AGCO Jackson Nationals.

After winning opening night of the Jackson Nationals, Thursday, and finishing fifth Friday night, his total combined points locked him into the pole position for Saturday night’s DIRTVision Fast Pass Dash. He dominated the field in the Dash, pulling away to a 3.5 second lead over second-place Daryn Pittman by the end.

Sweet had the plate of $41,000 in his hands and was ready to walk away with it. But when the Feature went green, he found himself having to brawl for it.

Pittman charged around the outside of Sweet through turns one and two to take the lead. The next time around, Sweet dove underneath Pittman in turn one, putting the two side-by-side at the exit of turn two. Neither were going to lift. But to avoid sliding up into Pittman, Sweet had to jerk his car sideways and allowed the Roth Enterprises No. 83 car to pull away.

Pittman held command of the lead for the next 11 laps before there was contact between he and the lap car of Austin McCarl, which sent McCarl rolling into turn one.

When the race went back green after the red flag, Sweet got the jump on Pittman, clearing him for the lead before they got back to the flag stand. Into turn one, Sweet moved to the top of the track, blocking Pittman’s line. The Grass Valley, Calif-native then pulled away to about a four-car-length lead exiting turn two.

Pittman’s fortunes continued to decline with Schatz working his way by the Oklahoma-native and dropping him to third – where he would remain for the rest of the Feature.

Leaving Pittman in third, Schatz began his hunt of Sweet. With just three wins this season, so far, and his last win coming nine races ago, the 10-time Series champion was as hungry as Sweet to return to Victory Lane.

Sweet lost grip exiting turn two on the slick track while trying to pass a lap car, with 11 laps to go. That allowed Schatz to close on Sweet and dive underneath him in turn three. The two were side-by-side exiting turn four with Sweet smoking his tires on the rubbered down groove of the track and Schatz fighting to keep his car straight.

“It didn’t surprise me one bit when the fifteen (car) was sneaking under me,” said Sweet, who has battled Schatz for the points lead all season long. “He’s got me chasing my tail a little bit.”

After Schatz’s attempt at passing the Kasey Kahne Racing car, Sweet got into a rhythm. He found his line and rode it for the remaining 10 laps to claim his 41st career Series win during the 41st Annual Jackson Nationals with a $41,000 payday.

“Once I got in clean track, I knew just to run right in the rubber and I didn’t want to allow any runs to happen,” Sweet said. “It was just one of those things where we were just good enough to get the win tonight. It wasn’t pretty I don’t think, but that’s why you set yourself up all weekend to get in the right position and we were in the right position and we were able to get the win.”

Schatz’s second-place finish was a rebound from Friday when he blew a motor while leading the Dash and ended up eighth in the Feature.

“Hats off to these (Tony Stewart/Curb-Agajanian Racing) guys,” Schatz said. “They’re digging. They’ve got an awesome race car. The driver’s got to step up to the plate a little bit, start swinging a bigger bat. We’ll work on that.”

Sweet has now won five of the last seven races. That’s resulted in him extending his championship lead to 72-points over Schatz.

While the “Big Cat’s” winning appetite was appeased Saturday night, hunger is sure to return next week.

The World of Outlaws on Wednesday, July 3, will return to Brown County Speedway in Aberdeen, S.D. for the Star Spangled Showdown.