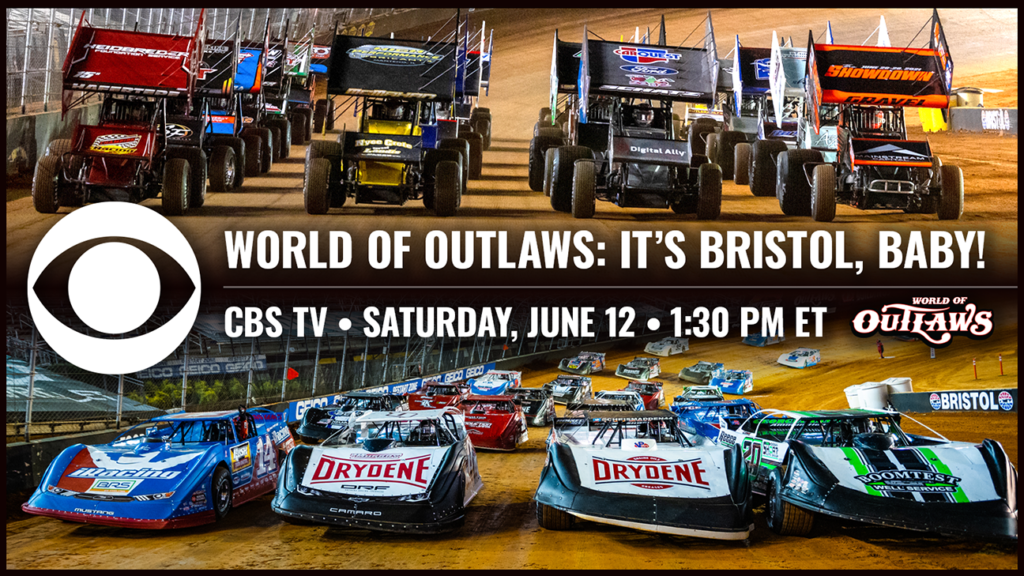 Race fans around the country will get to relive the World of Outlaws’ historic return to Bristol Motor Speedway when the premier dirt racing series returns to the CBS Television Network for the World of Outlaws: It’s Bristol, Baby special on June 12 at 1:30pm (ET).

“By stepping onto the stage at one of the most iconic racetracks in the country like Bristol Motor Speedway, we were able to showcase the best dirt car racing in the world to a new audience. And we gave them four amazing shows,” World of Outlaws CEO Brian Carter said. “We are grateful for CBS once again providing us with a platform to expand that audience further and continue to provide our current fans something special.”

When the World of Outlaws Sprint Cars took their turn during the Bristol Throwdown, drivers averaged speeds higher than 140mph and put on two shows worthy of the title Greatest Show on Dirt. The likes of 2019 Knoxville Nationals champion David Gravel, 10-time Series champion Donny Schatz, 2021 DIRTcar Nationals champion Logan Schuchart and 2019 Rookie of the Year Carson Macedo put the thunder in “Thunder Valley” with daring moves that brought fans to the edge of their seats.

Join the thousands of fans who witnessed these historic moments in motorsports history by tuning in to CBS on Saturday, June 12, at 1:30pm.

You’ll be able to catch additional World of Outlaws events throughout the year on CBS Sports Network, as well.

CBS Sports, a year-round leader in television sports, broadcasts a portfolio of events on the CBS Television Network, including THE NFL ON CBS; college football, including the SEC ON CBS; college basketball, including the NCAA Division I Men’s Basketball Championship; golf, including The Masters®, PGA Championship and PGA TOUR; and CBS SPORTS SPECTACULAR. In addition, the division includes CBS SPORTS NETWORK, the 24-hour home of CBS Sports, and produces INSIDE THE NFL for SHOWTIME. CBS Sports Digital’s multi-platform offerings include CBSSports.com and the CBS Sports apps for mobile and connected TV devices; streaming sports news network CBS Sports HQ; 247Sports; MaxPreps; CBS Sports fantasy games; and SportsLine.